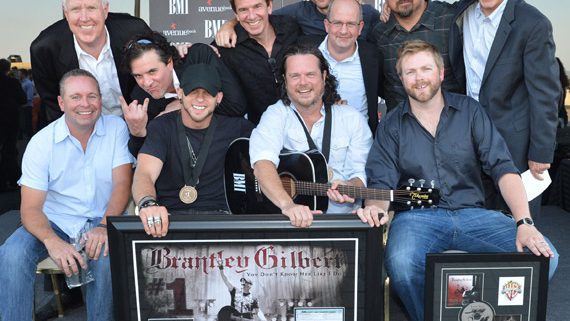 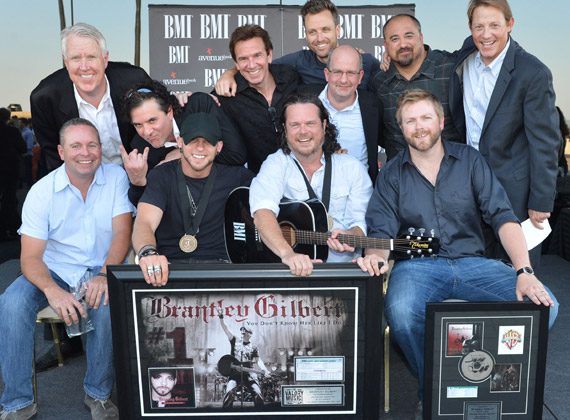 Big Machine Label Group was on the stands for a second time this week, this time to celebrate Brantley Gilbert and Jim McCormick’s No. 1 song “You Don’t Know Her Like I Do” during a rooftop reception at Nashville’s BMI offices yesterday (8/22).

The song is McCormick’s first No. 1 hit and Gilbert’s fourth No. 1 as a songwriter (and second as an artist). Both writers received silver cups from BMI from Clay Bradley, Warner-Tamerlane No. 1 plaques from representatives Steve Markland and BJ Hill, CMA medallions from Brandi Simms and CRB recognition from Michelle Tigard Kammerer. Paying it forward, Avenue Bank’s Ron Cox presented a contribution made in honor of the writers to the Iraq and Afghanistan Veterans Fund.

McCormick received a special black BMI Takamine guitar for his career milestone, to which Hill remarked, “Hopefully, you’ll be up here celebrating this a lot.”

“I’m more excited to celebrate Jim’s No. 1, than for myself,” said Gilbert, who also accepted special recognition from label representatives Annie Ortmeier and Brittney McKenna for reaching a social media milestone, 1 million ‘likes’ on Facebook. The star made an effort to thank management’s Rich Egan and Steve Tusman, and his bus driver, security, brother and mother in the audience. Valory VP of Promotion George Briner accepted recognition onstage alongside BMLG head Scott Borchetta.

“Look how beautiful this day is,” noted Borchetta before delivering remarks. “When we decided to add a few more tracks to Brantley’s album, I called his publisher at Warner Chappell. Let me say, not since Taylor Swift have I received a catalog this good.”

“I got a call from Scott,” recalled producer, Dann Huff. “I both hate and love them when he asks for favors. Brantley and I found a common thread through music. I’d like to point out this is Brantley’s band on the track…and give credit to Justin Niebank for engineering. And thank you Scott, for the call.”

“Today is a chance to say thank you for those who’ve encouraged me along the way,” said McCormick, who recognized his mom, dad, brother, sister, and wife among a list of industry salutes, saving his final thank you for Gilbert. “And thank you Brantley, for taking our song to the top.”