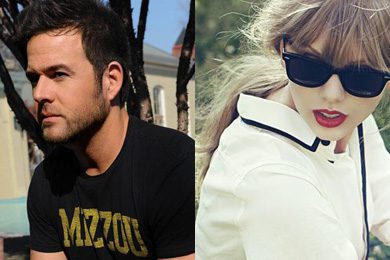 It’s all stars, no waiting, this week.

This sudden shower of name-brand artists has the happy coincidence of almost uniformly wonderful listening. Whether it’s an old favorite or a new one, these folks bring their best to the country-music party. The plethora of excellence means we must divvy up the Disc of the Day honors. Our Female winner is Taylor Swift. The Male performance belongs to David Nail who takes an Adele song jewel into a country setting. The Group prize goes to The Farm Inc. with bonus points for performing a lyric with Something to Say.

DIERKS BENTLEY/Tip It On Back
Writer: Tully Kennedy/Ross Copperman/Jon Nite; Producer: Brett Beavers & Luke Wooten; Publisher: none listed; Capitol (RI)
—Times are tough, so relax, drink up and let your troubles fade away. His vocal has even more personality than usual, and the swirling echo of electric guitars surrounding him is a little bit of sonic magic. Intensely involving.

THE FARM INC./Be Grateful
Writer: R. Clawson/M. Beeson; Producer: Danny Myrick & Rick Hoffman; Publisher: WB/Erin’s Dream/Crazy Blue Egg/Big Red Toe/Big Loud Bucks/Amarillo Sky, BMI/ASCAP; All In/Elektra/Warner
—Superior work all around. All three members are taking turns singing beautifully. The production is perfect. Best of all, the song has something really, really important to say about the times we’re living through. My hat’s off to everyone involved.

DAVID NAIL/Someone Like You
Writer: none listed; Producer: none listed; Publisher: none listed; MCA Nashville (ERG)
—He sings like an earth angel, and Adele’s ballad of lingering, longing love is a marvelous vehicle for him. Despite our already knowing every note of this massive pop hit, David makes it his own with only a stately piano backing him. That’s the mark of a great vocalist.

J.T. HODGES/Sleepy Little Town
Writer: Lee Thomas Miller/Chris Stapleton; Producer: Mark Wright, Don Cook & Mark Collie; Publisher: Writers of Sea Gayle/Emma’s Garden/House of Sea Gayle/New Son of a Miner, BMI/ASCAP; Show Dog Universal (track)
—I dig this guy. I thought “Goodbyes Made You Mine” should have been massive. Now comes this throbbing cautionary tale of what goes on behind closed doors in Small Town U.S.A. As before, he performs with admirable passion and intensity.

RADNEY FOSTER/Me and John R.
Writer: Radney Foster/Darden Smith/Jon Randall Stewart; Producer: Radney Foster & Justin Tocket; Publisher: none listed; Devil’s River (track) (www.radneyfoster.com)
—Now here’s an interesting concept. Radney’s brilliant 1993 CD Del Rio Texas 1959 is out of print. Fans keep asking him for a copy. So he has re-recorded its songs in an unplugged, acoustic setting. All your favorites are here — “Just Call Me Lonesome,” “Nobody Wins,” “Closing Time,” “Hammer and Nails” and so on — plus, you also get this new, evocative, wafting ode to driving lonesome with the accompaniment of Johnny Cash oldies on the radio. Mighty fine.