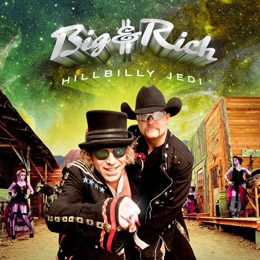 Big & Rich are preparing to release their fourth studio album, Hillbilly Jedi, September 18 on Warner Bros. Records. The album is currently available for pre-sale in three exclusive packages ranging from $14.99-149.99.

The three options include an assortment of extras, from branded aviator sunglasses, to Hillbilly Jedi T-shirts and personalized framed posters. While on the page, fans are able to listen to the duo’s track “Born Again,” featuring Bon Jovi, and view behind-the-scenes footage for the recording of the latest single, “That’s Why I Pray.”

Duo member John Rich was featured in the new CW primetime music competition series The Next: Fame Is At Your Doorstep, which premiered Thursday, August 16. The competition winner will be awarded an exclusive recording contract with Atlantic Records.

Previously, Rich was the winner on the 11th season of The Celebrity Apprentice, raising over $1.4 million dollars for St. Jude Children’s Hospital.