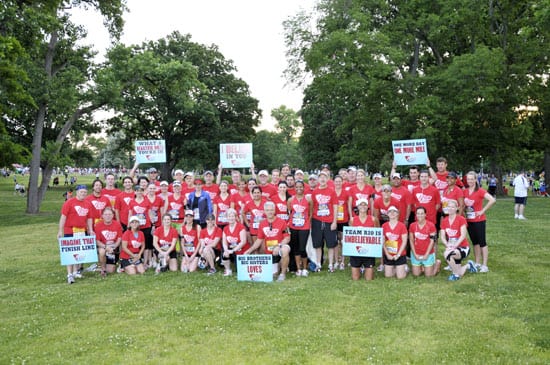 Last year Olander, Team Rio’s Celebrity Running Captain, accomplished his goal of finishing the half marathon in less than two hours, but this year the high temperatures in Music City slowed him down.

“I finished about 30 minutes later than I had anticipated,” explains Olander. “The heat zapped me this year and my hamstrings said, ‘no sir!’ around mile 14. That and my Chatty Cathy nature probably added another half an hour to my finish time.”

New this year, Team Rio added a spinning component to the fitness and fundraising efforts at the official Team Rio cheer station, FIT in the Gulch. Situated at the mile two marker, spinners participated by spinning 13.1 miles, while DJ Silver spun his own musical mash-ups to help pump up not only the spinners, but also the passing runners.

“Ebie and I came up with this idea last year while cheering on the runners and wishing there was a way for us non-runners to be active while supporting Team Rio,” shares Bryan Berndt, the owner of FIT in the Gulch. “We had an amazing time and we’re looking forward to an even bigger spin-off next year!” Passing runners showed their appreciation for the spinners with waves, thumbs up, and dancing to the music as they ran.

To make a pledge on behalf of Team Rio please visit www.teamrio.kintera.org.