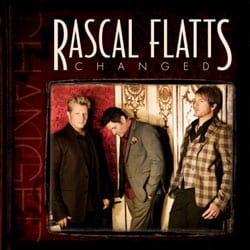 Rascal Flatts‘ album Changed was released last month (4/3) and has already been certified Gold by the RIAA for shipments exceeding 500,000. The accolade comes just after topping Country radio charts in the United States and Canada with “Banjo,” the band’s 14th career No. 1. The follow-up ballad, “Come Wake Me Up,” was released to radio Monday (5/21).

Changed was produced by Dann Huff and Rascal Flatts. It features five songs written by the members of the band and has garnered praise from the Associated Press, New York Times, NPR, USA Today and more.

Rascal Flatts is currently nominated for the 2012 CMT Music Award for Group of the Year for the “Banjo” video. Fans can vote through June 4 at www.cmt.com and the results will be revealed at the June 6 show.

The group is also nominated for a Teen Choice Award in the category of Choice Country Group. The awards will air on FOX on July 22. Fans can vote at www.TeenChoiceAwards.com.