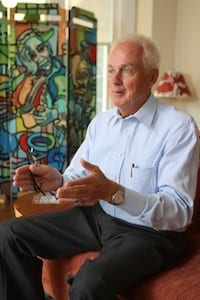 Bill Ivey will receive an Honorary Doctorate of Fine Arts at Watkins College of Art, Design & Film on May 12 when he delivers the commencement address for the 2012 graduating class.

The ceremony is free and open to the public starting at 2 pm at the Downtown Presbyterian Church.

Ivey, one of the nation’s leading scholars and writers on art, expression and cultural policy, was director of the Country Music Foundation in Nashville (1971-1998) and was twice elected board chairman of NARAS. He is also a four-time Grammy nominee (best album notes category) and author of numerous articles on U.S. cultural policy and folk and popular music.

Additionally, Ivey is the founding director of Vanderbilt’s Curb Center for Art, Enterprise and Public Policy, of which he directs the Arts Industries Policy Forum. The Center is dedicated to designing a new road map for cultural policy in America.

Ivey served on Barack Obama’s 2008 Presidential Transition Team for the arts and humanities, and as seventh chairman of the National Endowment for the Arts where his Challenge America Initiative has garnered more than $20 million to date for the arts endowment.

“Bill Ivey’s contributions to the arts and cultural policy are large and ground-breaking,” said Ellen L. Meyer, president of Watkins College of Art, Design & Film. “His insights will certainly benefit the graduating seniors as they pursue their careers and consider issues of cultural life and heritage.”

A former president of the American Folklore Society, Ivey holds a B.A. in history from the University of Michigan and an M.A. in folklore and ethnomusicology from Indiana University.