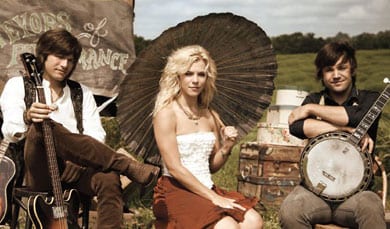 The Band Perry’s mega-hit “If I Die Young” has maintained a long life after its No. 1 chart ascent, and now the RIAA has certified the song Quadruple Platinum for sales exceeding four million. The news comes on the heels of TBP’s recent No. 1 “All Your Life” and Platinum certification of their debut album.

“We are honored by this acknowledgement and thankful that so many of you have connected with this song,” said Kimberly Perry, who won the 2011 CMA Award for Song of the Year for writing “If I Die Young.”

“Each time the bar is set, it seems that The Band Perry surpasses it! Selling over 4 million downloads on just one song is a huge accomplishment,” said Republic Nashville President Jimmy Harnen. “This extremely talented group is remarkable and we’re thrilled to have them as part of the Republic Nashville family.”

The Band Perry is currently touring with Brad Paisley’s Virtual Reality Tour and headlining their own dates. The group’s next single “Postcard From Paris” is going for adds immediately.