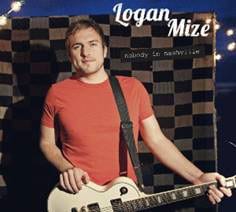 “I definitely don’t try to think about other artists when I’m writing,” says Mize. “I want to pull straight from my own head, I keep it my own for sure.”