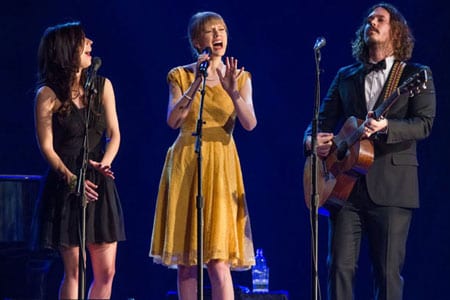 Taylor Swift and Viacom have partnered to introduce the new music video for “Safe and Sound,” featuring the Civil Wars, across multiple global platforms on Mon., Feb., 13. The debut is expected to reach more than 600 million households in the U.S., Canada, Europe, Latin America, Australia, Asia and Africa.

The “Safe and Sound” clip will premiere at 7:54 PM/ET during the MTV News special MTV First: Taylor Swift, and air simultaneously across all MTV channels including taylorswift.mtv.com. Swift will introduce the video on-air before sitting for an exclusive 30-minute interview with MTV News’ Sway Calloway. Afterward, the video will premiere on VH1 and CMT.

Fans can submit questions for the interview by Twittering to @MTVNews with hashtags: #AskTaylor and #MTVFirst.

The single is featured on the companion soundtrack for The Hunger Games film, due in theaters March 23. The soundtrack will be released for purchase in advance of the film. “Safe and Sound” was produced by T Bone Burnett and has been available for purchase since Dec. 23, 2011.