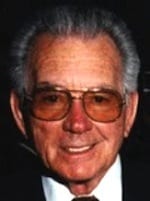 Baham won his BMI Award for “Charlie’s Shoes,” recorded by Billy Walker. The song became Walker’s biggest hit when it rose to No. 1 on the country charts in 1962. The songwriter’s other notable success was Jimmy C. Newman’s recording of his “Blue Lonely Winter” in 1968.

Roy Baham died on Wednesday, Feb. 21. He is survived by his wife Helen, son Jonathan, daughter Diane, granddaughter Brianna and brother Alfred. The funeral and burial were held on Saturday in Birmingham, AL.