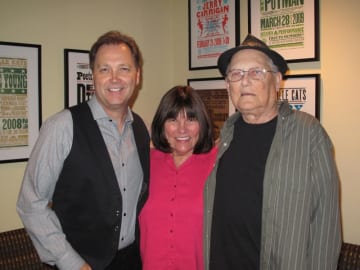 Master “fingerstyle” guitarist Paul Yandell, who was Chet Atkins’ bandleader for over 25 years, passed away Monday morning (Nov. 21) in Hendersonville following a battle with cancer. He was 76.

Yandell arrived in Nashville from Kentucky in 1955, already an accomplished guitarist. He began his career with the Louvin Brothers, working with them until 1959. In 1961, he joined the Kitty Wells show, where he performed until 1970. He joined Jerry Reed that year, and said he “went to college” by learning from Reed. In 1975, Yandell joined Chet Atkins and remained at his side for the next 25 years.

In August 2011, Atkins’ daughter Merle Atkins Russell bestowed Yandell with Atkins’ last and final “Certified Guitar Player” (c.g.p.) degree at the opening of the Chet Atkins exhibit at the Country Music Hall of Fame and Museum. As Atkins’ sideman, Yandell had helped confer the honor upon only four players before Atkins passed in 2001: Tommy Emmanuel, John Knowles, Jerry Reed, and Steve Wariner.

He is survived by his wife Marie Jones Yandell, son Paul, sister Yvone Lambert, brother Forrest Yandell, and numerous nieces and nephews. A Celebration of Life service will be held at Hendersonville Memory Gardens Funeral Home on Friday, Nov. 25 at 5 pm. Funeral services will take place Saturday, Nov. 26 at Clark’s River Baptist Church Cemetery in Symsonia, Ky. In lieu of flowers, donations may be made to Alive Hospice or the Country Music Hall of Fame and Museum’s Chet Atkins exhibit.