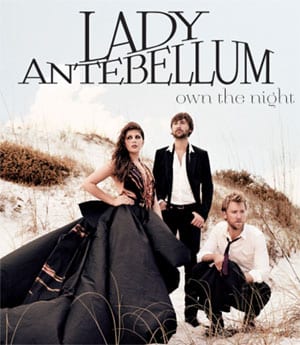 Lady Antebellum announces they will touch-down in three major cities surrounding their Sept. 13 Own The Night album release in a concert series labeled Own The Night: Unplugged. The evenings will feature stripped-down versions of new and old favorites from the band beginning in Chicago on Sept. 10, New York on release day (9/13), followed by Los Angeles on Sept. 15.

“The next few weeks are crazy, and we wanted to make spending time with our fans in a low-key, intimate setting a big priority,” says Hillary Scott. “We want to play some of our new songs and their favorites, and really live in this moment with them.”

These intimate shows will precede the band’s first headlining tour, hitting arenas in 21 cities, starting Nov. 11 in Knoxville, featuring Josh Kelley on all dates, with Randy Montana and Edens Edge on select dates.

Fans can purchase the very limited “Unplugged” tickets beginning tomorrow (8/26) plus receive information on the arena tour tickets through www.ladyantebellum.com.
A behind-the-scenes look as the band prepares for the upcoming Own The Night album release and tour can be seen with the video below.

“We named our new album ‘Own The Night’ after one of our favorite songs ‘We Owned The Night’ off the new album, and felt it was a great description of how we wanted our fans to spend each night of the tour with us,” explains Dave Haywood. “When people come out to our live show or hear the song on the radio it’s a call to action. Be confident, live in the moment and enjoy the experiences you’re going through—own them.”

Own The Night 2011 Stadium Tour