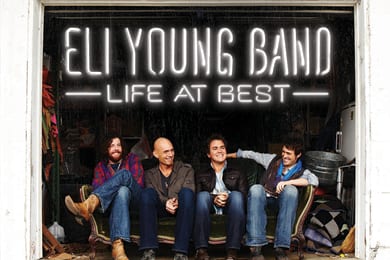 Republic Nashville artist Eli Young Band’s “Crazy Girl” has been certified Gold by the RIAA for sales of over 500,000 downloads. The track is the lead single from their forthcoming album Life At Best, made its debut at No. 1 on the iTunes Country Singles Chart with over 47,000 first week downloads.
“Gold rocks!! You grow up hearing about artists going gold and dream of what it would be like,” commented EYB drummer Chris Thompson. “Gold has always been such a measure of success.” Lead singer Mike Eli added, “It’s pretty cool that the single went gold before the record even came out.” Thompson continued, “This is a huge milestone for us.”
With its debut as the most added single at Billboard, “Crazy Girl” is the fastest rising single of the bands career and is currently No. 9 on MusicRow‘s CountryBreakout chart.
“This is an amazing accomplishment that sends one message loud and clear – Country music fans love the Eli Young Band and ‘Crazy Girl!’ Everyone at Republic Nashville could not be happier or more excited and we all look forward to the release of the debut album on August 16. Fans are going to love this album,” said Republic Nashville President Jimmy Harnen.