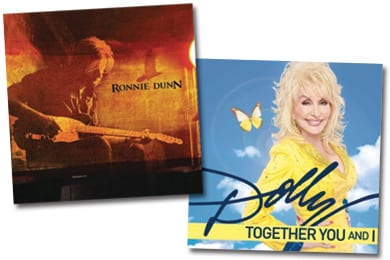 You can tickle my dancing feet or dazzle my brain with word play, but if you really want to get my attention, pierce my heart.
That’s what Ronnie Dunn did this week with “Cost of Livin.’” Not since Shenandoah’s “Hey Mister I Need This Job” has a country song so directly addressed the pain of our times. Give that veteran a Disc of the Day.
We have some sophomore singles this week, notably from Brett Eldredge, DJ Miller and The Dirt Drifters, but there are no disc debuts. So instead of a DisCovery honor, how about a re-DisCovery Award for Dolly Parton?
It would appear that in the wake of the CMA Music Fest, we have a star shower on our hands. In addition to Ronnie and Dolly, we suddenly have stellar product from Toby Keith, LeAnn Rimes and Alan Jackson. And all of them are playing at the top of their games.
LEANN RIMES/Give
Writer: none listed; Producer: none listed; Publisher: none listed; Curb (MPE)
—Her voice has never sounded more powerful or womanly. The “golden rule” message is right on and so is the production of this majestic power ballad. In a word, gorgeous.
ALAN JACKSON/Long Way To Go
Writer: none listed; Producer: none listed; Publisher: none listed; EMI (MPE)
—Entirely lovable. It has plenty of summertime bounce and a merry little lyric to make you smile. He’s got a bug in his margarita, a woman he’s trying to drink off his mind and a long, long way to go. Hang on for the happy mariachi trumpets at the finale.
RONNIE DUNN/Cost Of Livin’
Writer: Phillip Coleman/Ronnie Dunn; Producer: Ronnie Dunn; Publisher: Tractor Radio/Sony-ATV Tree/Showbilly, SESAC/BMI; Arista (track)
—Doing what country music does best, giving a voice to the powerless. In this case, a man who aches for a job. Understated and immensely moving.
TOBY KEITH/Made In America
Writer: Toby Keith/Bobby Pinson/Gregory Scott Reeves; Producer: Toby Keith; Publisher: Tokeco Tunes/Bobby’s Lyrics/Land and Livestock/Do Write/Sweetwater Jams/Reynsong, BMI; Show Dog Universal
—Heartland sentiments, from a man who is a master at them. The stirring, pounding production underlines every straight-from-the heart lyric. My favorite: “He won’t buy nothin’ he can’t fix/With WD-40 and a Craftsman wrench.”
COLT FORD/She Likes To Ride In Trucks
Writer: Thom Shepherd/Colt Ford/Noah Gordon; Producer: Jayson Chance; Publisher: Bourbon Street French Quarter/Words and Music/Average ZJS/New Millennium, SESAC/ASCAP; Average Joe (CDX) (615-733-9983)
—He’s losing his little girl to womanhood. The rapping is actually soft and gentle. The sung chorus is a wafting and wistful. Surprisingly effective.
DOLLY PARTON/Together You And I
Writer: Dolly Parton; Producer: Kent Wells; Publisher: Velvet Apple, BMI; Dolly/Warner (www.dollypartonmusic.net)
—Strikingly contemporary sounding. The surging pop production values, relentless rhythm, keening guitars and deft electronic touches are all just yummy. It goes without saying that her voice remains a thing of wonder. And talk about a positive, uptempo love song…
BRETT ELDREDGE/It Ain’t Gotta Be Love
Writer: Brett Eldredge/Ben Daniel/Wayd Battle; Producer: Byron Gallimore; Publisher: FSMGI, English Ivy/Brett Eldredge/Chrysalis One/Bug, IMRO/BMI; Atlantic/Warner
—This whole song is one big ol’ pick-up line. Everything from, “Can I bum a light?” to “Is that seat taken?” to “What’re ya drinkin?’” and “Do you wanna dance?” Also, the track seriously rocks.
THE DIRT DRIFTERS/Always A Reason
Writer: Ryan Fleener/Jeff Middleton/Justin Wilson; Producer: Justin Niebank; Publisher: Sony-ATV Tree/Buddy Lloyd/Music of Stage Three/Jersey South/BMG Chrysalis, BMI; Warner Bros.
—You can go to the bar to dance, fight, celebrate, drown your sorrows or have a ball. As this righteous, blue-collar rocker says, “There’s always a reason to drink around here.” I like these guys.
DJ MILLER/Between Sundays
Writer: Richard A. Alves/Gary Duffy/John Colgin/Reid Brannon; Producer: Johnny Morris; Publisher: Big Hitmakers/Magic Penny/Rainy Graham/Three Bar/Christopher Scott, BMI/ASCAP; Evergreen/9 North/Spinville (615-327-3213)
—His voice isn’t very memorable here, kind of a generic honky-tonk baritone performance. But the song is a solid winner about life lessons learned at the foot of a wise mechanic.
KATIE ARMIGER /I Do, But Do I
Writer: Rhean Boyer/Greg Jones; Producer: Chad Carlson; Publisher: Major Bob/Rio Bravo/Castle Bound, ASCAP/BMI/SESAC; Cold River
—The extra “bottom” in the production competes with her curiously “dry” sounding vocal. A little echo on her high end would have pulled it together, sonically. Tune-wise, it is undeniably catchy. 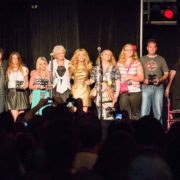 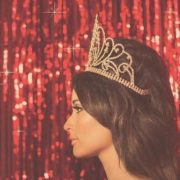