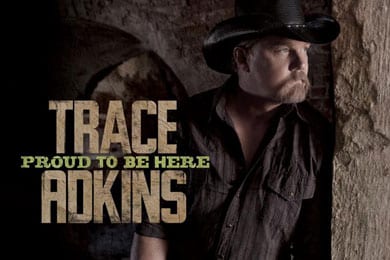 Trace Adkins has announced the release of his new album Proud To Be Here, due August 2 on Show Dog-Universal Music. Adkins revealed details about the album during his CMA Music Festival performance at LP Field Saturday night (6/11).
“Proud To Be Here was chosen as the album title some weeks ago because it’s how I’ve felt ever since my first album release and during every milestone since,” says Adkins. “The title song could have been based on my life and it’s about narrow escapes and the grace that guides you through. Obviously, now after the fire, Proud To Be Here takes on an even greater significance. Once again, I’ve been blessed and everyone is safe. I don’t even want to think what could’ve been had it started at 3am instead of 3pm…”
The 10-track album was recorded earlier in spring and produced by Kenny Beard and Mark Wright. A deluxe bonus version, featuring four additional tracks, will also be available. The collection’s lead single, “Just Fishin’” (Casey Beathard, Monty Criswell, Ed Hill) was produced by Michael Knox and is a father’s tribute to his daughter. The album’s title track, written by Chris Wallin, Aaron Barker, and Ira Dean, aims to resonate with anyone who’s ever reflected upon narrow escapes.
Adkins recently lost his home to a fire, but fortunately he and his family were unharmed. The singer has redirected offers of support to those affected by flooding and tornadoes in the South, urging his fans to pledge support to the American Red Cross instead. Visit http://american.redcross.org/traceadkins for details.