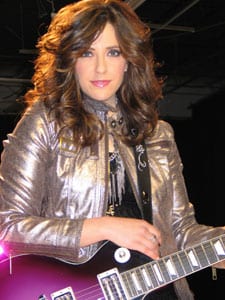 “Get Right Or Get Left”
Way Out West Records
Thank you early believers: KFAV, KKOW, KLMJ, KREK, WMEV, WPPL, WUPY WYVY, KCNY, KMGO, KSMA, KXOX, WATX, WTHO, WYBL & KBCN!
“She’s a wailer. And this take-a-hike-buddy attitude is perfect for her rocking vocal chops.”
—Robert K. Oermann, MusicRow
“Shawna is now truly ready to compete with the big label stars. On “Get Right Or Get Left” there’s a hint of the vocal swagger of LeAnn Rimes. With a little luck and help from radio stations, we may have the birth of another star.”
—Matt Bjorke, Roughstock
Oklahoma recording artist Shawna Russell has released her latest single, “Get Right Or Get Left” to radio. The song is from her forthcoming self-titled sophomore album on Way Out West Records, which was co-produced by Grammy winner Julian King with Clif Doyal and Tim Russell. Shawna wrote or co-wrote the project’s 10 songs. The single goes for adds May 23.
Shawna arrived on the scene in 2008 with her debut album Goddess, which featured singles “Should’ve Been Born With Wheels,” “Fire In The Desert,” and the title track. The CMA named her one of its Who New to Watch, Country Weekly gave the album 3.5 stars, and MusicRow’s Robert K.Oermann bestowed his DISCovery Award on her.
Contact:
Clif Doyal
Way Out West Records
[email protected]
Publicity:
CDA Promotions-Nashville
[email protected]
www.shawnarussell.com
Programmers may download a broadcast quality copy of the song at AirPlay Direct: www.airplaydirect.com/shawnarussell
[wpaudio url=”https://musicrow.com/wp-content/uploads/2011/04/sr-grgl.mp3″ text=”Shawna Russell – Get Right Or Get Left” dl=”0″ autoplay=”1″]