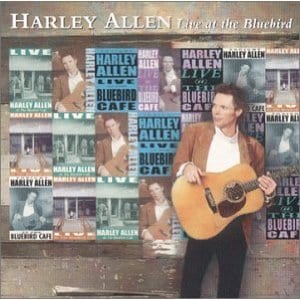 A memorial service for Nashville songwriting great Harley Allen will be held on Wednesday (4/6) at Christ Church, 15354 Old Hickory Blvd. (37211) — He died on March 30, of lung cancer at home in Nashville.
The gifted and prolific Allen won BMI Awards for such songs as “Between the Devil and Me” (Alan Jackson, 1998), “The Little Girl” (John Michael Montgomery, 2000), “The Baby” (Blake Shelton, 2003), “Tough Little Boys” (Gary Allan, 2003), “If Nobody Believed in You” (Joe Nichols, 2004), “My Last Name” (Dierks Bentley, 2004), “Awful Beautiful Life” (Darryl Worley, 2007) and “I’ll Wait for You” (Joe Nichols, 2007). He was BMI’s Country Songwriter of the Year in 2005. He earned an Album of the Year Grammy Award for performing as one of The Soggy Bottom Boys on the soundtrack of 2001’s O Brother Where Art Thou. The group’s “I Am a Man of Constant Sorrow” also earned a Grammy as well as the CMA Award as Single of the Year.
His “Me and John and Paul” won Song of the Year from the International Bluegrass Music Association (IBMA) in 2005. Other successes included “Everything I Love” (Alan Jackson, 1997), “Paradise” (Craig Morgan, 2000), “The Man He Was” (George Jones, 2001), “Rainbow Man” (Jeff Bates, 2003) and “When Somebody Knows You That Well” (Blake Shelton, 2004).
Harley Allen had a notable, 20-year career in bluegrass music before he moved to Nashville. Born Jan. 23, 1956, he was the son of the acclaimed Red Allen (1930-1993), a member of the Bluegrass Hall of Fame. Red was a key part of The Osborne Brothers classic vocal harmony blend and later led The Kentuckians in the 1960s. Harley and his older brothers Greg, Ronnie and Neal became their father’s band in 1970, when they were still in their teens.
Harley wrote his first recorded song, “Hobo Joe” at age 15. By 1995, his songs had been recorded by bluegrass stars Eddie Adcock, Rhonda Vincent, Claire Lynch and IIIrd Tyme Out, as well as his own groups The Allen Brothers and The Allen-Lilly Band (Harley and Mike Lilly). During his bluegrass years, Harley Allen recorded 16 albums and was published by Acuff-Rose.
He left his hometown of Dayton, Ohio to seek his fortune in Nashville in 1989. He landed a staff songwriter job with a publishing company, Ten Ten Music, within three months.
The first mainstream country artist to place a Harley Allen song on the charts was Garth Brooks. His version of “Rollin’” was a track from the million-selling 1995 CD Fresh Horses. Linda Ronstadt issued her version of Harley’s “High Sierra” that same year. The tune had previously been recorded by Poco (1982), Tony Trischka (1990) and Chesapeake (1994) and would go on to further fame as a track on Ronstadt, Dolly Parton and Emmylou Harris’s Gold-selling Trio II in 1998.
Previously a recording artist for Rounder, Folkways and other labels, Allen issued Another River on Music Row’s Mercury Records in 1996. In 1998, Alan Jackson’s recording of “Between the Devil and Me” became the songwriter’s first chart-topping success. Tracy Byrd, Sammy Kershaw, John & Audrey Wiggins, Alison Krauss, Hal Ketchum and Don Williams soon recorded other Harley Allen songs.
He continued to provide songs to the bluegrass community, as well. In addition to Krauss, such bluegrass stars as Lou Reid & Carolina, David Parmley & Continental Divide, Bradley Walker, Jimmy Bowen & Santa Fe, The Lonesome River Band, Ricky Skaggs, The Grascals, Wildfire, The Del McCoury Band, Mountain Heart and The Charlie Sizemore Band were among the festival headliners who recorded his tunes.
His reputation for insightful, innovative and lyrically powerful composing made him a songwriters’ songwriter in Music City. His club performances were marked by wildly witty banter as well as strikingly emotional material.
Mark Wills, Joe Diffie, Josh Turner, John Conlee, Kathy Mattea, Gene Watson, Daryle Singletary and Billy Currington are just a few of the artists who eagerly recorded Harley Allen creations in recent years. Alan Jackson has recorded nine of his songs. Gary Allan has cut five.
Harley Allen is survived by his musician wife Debbie Nims Allen, son Aaron, daughters Katie and Maggie, sister Delores and brothers Ronnie and Greg.
Contributions can be made in his honor to the Chet Atkins Music Education Fund c/o The Community Foundation of Middle Tennessee.