>>Noted keyboard session player David Briggs will appear as part of the Country Music Hall of Fame and Museum’s Nashville Cats: A Celebration of Music City Musicians series on March 26. The program which starts at 1:30 p.m. is free to museum members and/or included with museum admission. It will also be streamed live on www.countrymusichalloffame.org. In 1969, Briggs and Norbert Putnam opened Quadrafonic Sound Studios in Nashville. which recorded sessions for artists including Jimmy Buffet, Linda Rondstadt and Neil Young before it was sold in 1976. A few years later, Briggs opened a new recording studio, House of David. In 1985, he joined with Will Jennings to form publishing company Willin’ David Music. The partnership published the Academy Award-winning song “Up Where We Belong.”  Briggs also found success recording commercials for a variety of clients including Budweiser, Chevrolet, Coke and Sears. He served as musical director for TV specials including several CMA awards telecasts, The 65th Anniversary of the Grand Ole Opry, the CBS Hall of Fame Special and a Minnie Pearl tribute. 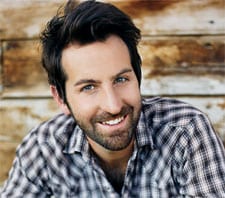 >>MCA singer/songwriter Josh Kelley has co-written the theme song for CBS sitcom Mike & Molly with Keb’ Mo’. “The Mike & Molly theme song came around sort of randomly,” Josh says. “In 2004, I called up Keb’ Mo’ and said, ‘I’d really love to write a song with you.’ I drove up to his house and we wrote ‘I See Love.’ He put it on his album. Probably six months ago, he called me and said, ‘There’s a TV show called Mike and Molly that wants to use the song because they came to my live show and heard it.’ It’s funny because now I’m a really big fan of the show and every time I watch it, I get to hear this cool song.” Kelley’s debut country album Georgia Clay is set for release March 22.
>>Universal Music Group Nashville presented Jamey Johnson with a plaque commemorating the gold certification of his ambitious 25-song double album during a gathering in Nashville (2/18). The Guitar Song is up for Album of the Year at the ACM Awards and recently received two Grammy nominations. UMGN Chairman Luke Lewis told the crowd, “I can’t be any prouder than to hand my friend Jamey Johnson a gold record.”