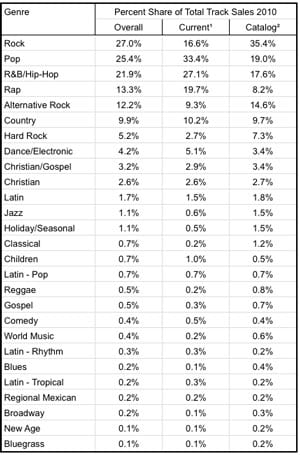 One of the latest offerings from Nielsen SoundScan, the company that tracks sales of recorded product, is a series of Digital Song Genre Reports. These new lists compliment the Digital Song Genre charts which were created at the start of 2010.
“Nielsen SoundScan’s new digital song genre capabilities are an additional tool to help our label and retail partners market and sell music,” said David Bakula, Sr. VP Nielsen Entertainment. “Genre data provides an important context with analyzing digital track data in terms of artist sales as well as the broader trends at both the label and national levels.”
According to the company, Nielsen SoundScan offers 27 digital song genres overall and 16 core genres in each classification—Overall, Current, & Catalog. Current includes digital songs released in 2009 or 2010; Catalog includes digital songs released prior to 2009. More than five million songs have been coded with genres to date.
Nielsen offers two levels of genre categorization – Core Genre and Overall Genre. Core is the primary genre for any given song (a song may only have one core genre assignment) and overall Genre, which allows for digital songs to cross multiple genres simultaneously in order to better evaluate a song’s overall performance in the current market.
Rock was the most popular digital song genre with a 27% share during 2010. Rock also experiences a higher percentage of catalog sales within the genre, with 72.4% of its sales coming from catalog [see chart].