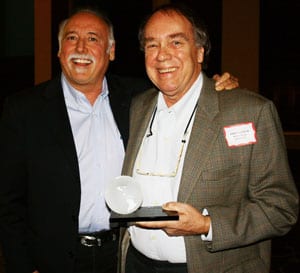 “It’s a huge honor and a real thrill to be recognized after a lot of miles and a lot of nights away from home,” said Lomax. “I love taking Country Music all around the world. It’s a common language. I’ve been to countries where no one spoke English but they spoke Country Music.”

The Jo Walker-Meador International Award recognizes outstanding achievement by an individual or company in advocating and supporting Country Music’s marketing development in territories outside the United States. It was named in honor of former CMA Executive Director (1959-1991) and Country Music Hall of Fame inductee Jo Walker-Meador.

Lomax established Roots Music Exporters in 2001, selling indie artist, retail exclusive, and limited edition CDs, DVDs, and vinyl to importers in Australia, Europe, Japan, and New Zealand. He is also an internationally known music journalist whose work has been published on four continents. Currently, Lomax writes a regular column for Country Update in Australia and Country Music People in England. He has authored three books, including Nashville Music City USA, and penned numerous entries in the upcoming revised edition of the CMF/Oxford U Press Encyclopaedia of Country Music.