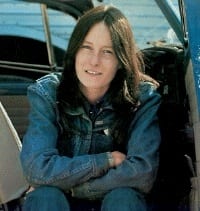 Linda Hargrove was also a recording artist, herself. Between 1974 and 1978, she released eight charting singles on Elektra, Capitol and RCA. Her biggest singing success was 1975’s “Love Was (Once Around the Dance Floor).”

At a time when female country performers were highly coiffed in glamorous evening gowns, Linda Hargrove defied convention by wearing her straight hair unstyled, not using makeup and dressing in denim. Hence her billing as “The Blue Jean Country Queen.”

Born in Florida in 1949, Linda Hargrove became intrigued by Music City after hearing Bob Dylan’s Nashville Skyline album of 1969. In 1970, producer and steel guitarist Pete Drake discovered Hargrove, signed her to a song-publishing contract and began using her as a guitarist on recording sessions by Waylon Jennings, Mac Davis and other stars.

Within a few years, Hargrove was producing sessions, herself. Among her productions were ad jingles for Plymouth, Frito-Lay, Golden Flake potato chips and Dodge trucks.

She married and underwent a religious conversion. As Linda Bartholomew, her married name, she recorded gospel albums in 1981 and 1989. She also left Nashville and returned to her native Florida.

Throughout those years, her health became precarious. She had been diagnosed with leukemia in 1986.

“She underwent a bone marrow transplant 20 years ago,” reported her sister Susan Walker. “Complications from that caught up with her.”

Linda Hargrove died Sunday night, October 24, at Big Ben Hospice House in Tallahassee, Florida. In addition to sister Susan Walker, she is survived by sister Virginia Tompkins, brothers Lee Hargrove and Mark Hargrove and by many nieces and nephews.

A memorial service is being planned. Funeral arrangements were incomplete at press time.