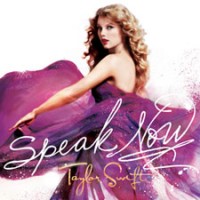 Taylor Swift’s Speak Now is officially in the wild and on sale. The 14-song set hit bins and digital download locations on Monday (10/25) giving it one day longer than the usual 6-day release schedule to log what seems destined to become a record breaking debut week.

Industry guesstimators are predicting sales in the 800-900k range while admitting the possibility that Ms. Swift may break the one million mark. A quick look at our Album Sales Benchmarks sidebar shows that Swift is highly likely to eclipse Eminem’s 2010 record, has a strong likelihood of erasing Shania Twain’s record status and will easily surpass debut week sales of her own previous album, Fearless. Remaining to be seen is whether the 20-year-old who penned all 14 songs on her new disc can also join Garth Brooks and Lil Wayne in the mile high one million+ club!

A quick look around the net shows that Amazon is selling the digital album today (10/27) for a low $3.99, and the plastic CD format for $8. The iTunes download contains a digital booklet and allows fans to “complete the album” (not pay for tracks they they already own), but rings the register at a higher $13.99. Aiming at the Target, fans can find an exclusive CD with extra content for $14.99 or the regular CD edition for $9.99. 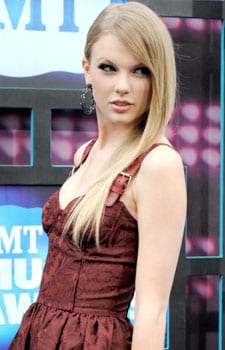 Taylor Swift pictured on the red carpet of the CMT Awards. Swift offers a hidden message, "CMT Awards," in the lyrics for the song "The Story of Us," in the liner notes. Many people speculate the track is directed at John Mayer. Photo: izzynashville.com

Odds makers expect that Swift’s Speak Now will become country music’s largest-ever selling digital week album. Writer Randy Lewis points out in the LA Times, “The enthusiastic response to the album runs counter to the downward trend of overall record sales, which in the latest reporting period were 14% lower than in the same period last year, according to Nielsen SoundScan. Just two weeks ago, Toby Keith’s Bullets in the Gun set a new record for the lowest sales figure for a No. 1 album debut –71,000 copies– since SoundScan began monitoring retail sales in 1991. Swift also would counter the trend of artists who have been unable to match or top their previous sales figures. Her 2008 sophomore album, Fearless, debuted at No. 1 after selling 592k copies in its first week of release.”

Not surprisingly Swift is blanketing the media. Here’s a few of her higher profile appearances: On Thanksgiving night, NBC will air the one-hour primetime special Taylor Swift – Speak Now. On 10/26 she visited The Today Show (NBC) and The Late Show with David Letterman (CBS), followed by stops at Live! With Regis & Kelly (10/27), Dancing With the Stars (11/2) and an album release party on Ellen (11/1).

According to www.metacritic.com Speak Now is getting highly favorable reviews from both critics and fans…