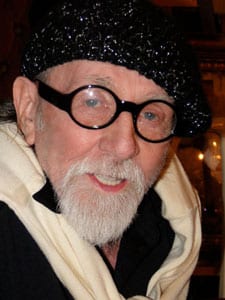 WSMV news and The Tennessean have confirmed that Richey died on July 31. The station stated that, at his request, he was buried without a public memorial or publicity. Posts on his Facebook page continued to appear after his death, causing some confusion and adding to the mystery.

To younger Nashvillians, Richey was best known as the fifth, final and longest lasting husband of Hall of Fame superstar Tammy Wynette. But during his long Nashville career, he had several other notable roles.

Born George Richardson on Nov. 30, 1935, he is a native of Promise Land, Arkansas. A gifted pianist and songwriter, Richey arrived in Nashville in the 1950s. His keyboard talent led to recording session work with Lefty Frizzell, Marty Robbins, Ernest Tubb, Tommy James, Kenny Rogers, Ringo Starr and many others.

George Richey first achieved prominence as a songwriter with his co-written “I’ll Share My World With You” for George Jones in 1969, followed by “A Woman Lives For Love” for Wanda Jackson, “Heavenly Sunshine” for Ferlin Husky and “Then He Touched Me” for Jean Shepard, all in 1970. Huskey followed up with Richey’s co-penned “Your Sweet Love Lifted Me” later that same year. Richey served brief executive stints with the early Nashville offices of the Capitol and United Artists labels, but thereafter concentrated on record production and songwriting.

Richey co-wrote the George Jones classics “The Grand Tour” (1974) and “A Picture of Me (Without You)” (1972). He is even more strongly associated with the Wynette standards “Til I Can Make It On My Own” (1976) and “You and Me” (1976). He also co-wrote the Jones-Wynette duets “Southern California” (1977) and “We Loved it Away” (1974). In addition, Richey’s tunes were sung by Tanya Tucker, Claude King, Barbara Mandrell and other artists during the 1970s. Brother Paul Richey was also a Nashville songwriter of note.

After marrying Wynette in 1978, George Richey largely set aside his keyboard and composing work to manage her career. She died on April 6, 1998.

George Richey was 74 years old. He had been battling chronic obstructive pulmonary disease. He is survived by his fourth wife, Sheila Slaughter Richey, whom he married in 2001. They have one daughter, Tatum. His first marriage, 1953-1969, was to the former Dorothy Ann Tippit. He is survived by his two children from that union, son Kelly and daughter Dierdre. His 1974-78 marriage to Sheila Hall produced no children.

George Richey is reportedly buried near Tammy Wynette in the mausoleum at Woodlawn Memorial Park. The cemetery first confirmed his passing to MusicRow on Monday.