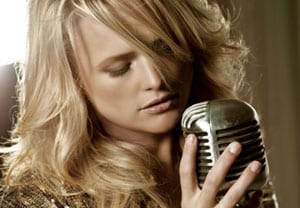 Hot on the heels of her four-week, No. 1 single “The House That Built Me,” Miranda Lambert is ready to release follow-up single “Only Prettier,” from her ACM Album of the Year, Revolution. The single, which shipped to radio Monday was written by Lambert and Natalie Hemby.

“To me, ‘Only Prettier,’ is an anthem, it’s my own anthem, and I want girls to have their fists in the air singing ‘Only Prettier,’” Lambert says. “It’s antagonistic in a fun way, and I loved the attitude behind it. It kind of fools you, because it’s got this really country, laid-back intro, but then it’s balls-to-the-wall the rest of the way. It’s so much fun!”

For the song’s video, Lambert asked a few of her girlfriends, including Kellie Pickler, Hillary Scott of Lady Antebellum and Laura Bell Bundy, to join her. While the particulars of the video are being kept under wraps, Lambert and friends portray two rival cliques attending a high school sock hop.

Lambert, a three-time Grammy nominee, platinum-selling recording artist and hit singer/songwriter, recently added her first CMT Award to an already impressive list of accolades. The fan-voted CMT Award for Female Video of the Year joins Miranda’s recent ACM wins for Album of the Year, Female Vocalist of the Year and Video of the Year (“White Liar”). Her current single, “The House That Built Me,” has held the No. 1 position for four straight weeks. It follows “White Liar,” Miranda’s first career No. 1.   Lambert recently wrapped up her Roadside Bars and Pink Guitars headlining tour and will be joining the Lilith Fair tour this summer. For more information, visit www.MirandaLambert.com