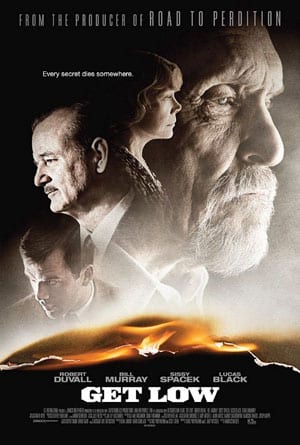 On July 27 Rounder Records will release the soundtrack to Sony Pictures Classics’ Get Low. The soundtrack features new material recorded especially for the film by Rounder artists Alison Krauss – her first new track since 2007’s A Hundred Miles or More – and The SteelDrivers (the latter also appear in the movie).  Academy Award winning composer Jan A.P. Kaczmarek (Finding Neverland) and 12-time Grammy-winning dobro player Jerry Douglas wrote the scores, while the rest of the soundtrack includes vintage tracks from The Ink Spots, Gene Austin, Paul Whiteman and Bix Beiderbecke.

Starring Academy Award winner Robert Duvall, Golden Globe winner Bill Murray, Academy Award winner Sissy Spacek and Lucas Black, Get Low is based on the true story of Felix “Bush” Breazeale – a Tennessee recluse who planned his own funeral while he was still alive and could enjoy it. To draw a crowd, Breazeale sold lottery tickets offering his valuable plot of land as the prize, and the ploy worked. The “living funeral” commanded national attention and in the end it was said that as many as 12,000 “mourners” from at least 14 different states showed up on June 26, 1938, including a Life Magazine photographer and major newspaper reporters – to pay their respects to Breazeale as he watched it all transpire.

The SteelDrivers will also be releasing their much anticipated sophomore release, Reckless, September 14 on Rounder Records.