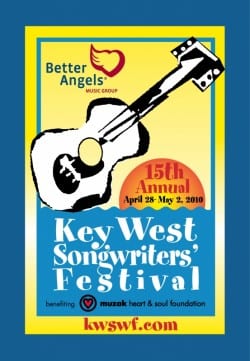 Tons of Nashville tunesmiths will be headed south for The Key West Songwriters Festival, running Wed., April 28 through May 2. The 15th annual festival will offer acoustic songwriter sets at venues all over the island, featuring over 150 top songwriters. In fact, half of the songs on the current Top 10 country singles chart are represented in this year’s roster.

Better Angels Music Group is sponsoring the event which will benefit the Muzak Heart and Soul Foundation.