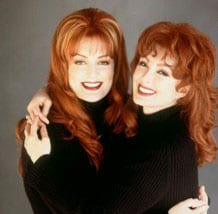 Superstar duo The Judds will kick off 2010 CMA Music Festival with the opening daily concert on the Riverfront Park Stage at 10 a.m. on Thursday, June 10.

“The Judds performing on the Riverfront Park Stage – that is something worth waking up for!” says Steve Moore, CMA Chairman of the Board. “We are so excited to have Naomi and Wynonna reunite at CMA Music Festival and kick off all the festivities. We know this will be a one-of-a-kind performance as only The Judds can do.”

“We are totally psyched to get to kick off CMA Music Fest this year on the Riverfront Park Stage,” said Naomi and Wynonna Judd. “We can’t wait to be live with fans and music lovers from across the country. It’s such a privilege to partner with CMA to spread the word about our final tour. Plan your life around it. The Judds are coming back.”

In preparation for The Judds’ highly anticipated 2010 final tour later this year, the duo has invited fans to submit names for the Name That Tour Contest. The winning name will be selected by The Judds and awarded credit in the 2010 Commemorative Judds Tour Book, a thank you video from The Judds, and $500 in tour merchandise. The contest ends on April 23. For details, visit www.wynonna.com.