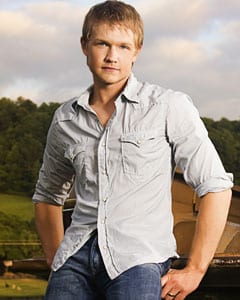 While most know Blaine Larsen as a serious guy whose songs often dig a little deeper than most, it doesn’t mean the 20-something singer/songwriter/guitarist doesn’t know how to kick back and have a good time. As he likes to say, “I promise… I’m just like any other 24 year old guy who’s trying to get by in today’s world: you gotta work hard for what you get, but you also have to enjoy the life you’ve got.”

That was the inspiration for Larsen to start “Chillin’” with regular writing buddies Ed Hill and Phil Odonnell. “We were just sitting around, talking about what we do when we’re just sitting around,” Larsen says, “and we didn’t have time to quite finish it, but we knew it felt good… and we thought we were maybe saying it in a way that hadn’t been quite like that, and I think we all knew the melody felt really good…” The song will appear on Larsen’s upcoming Treehouse Records album Not Too Bad.

With early response being strong – including out of the box adds from KASE in Austin, KYGO in Denver, WWYZ in Hartford, KAJA in San Antonio and KRTY in San Jose – “Chillin’” is an antidote for this chilly winter.

“I know it’s not what people maybe expect from me, but ‘Chillin’” is definitely a big piece of who I am,” Larsen explains. “You know, life is fun if you decide to enjoy it… and me and my friends, we do! I think as you’re making your way, it’s the single best thing you do – and when I’m out on a boat with friends, or just hanging out around the house, that’s really what it all comes down to: kicking back, having a good time, being happy right where you are.

“The funny thing is: it’s a lot simpler and easier than most people think. Heck, that was a lot of why we wrote the song the way we did.”