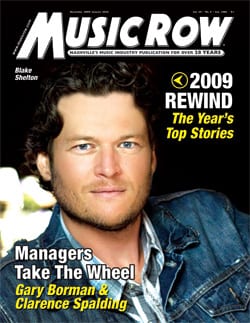 Label: Warner Music Nashville
Current Album: Startin’ Fires
Current Single/Video: “Hillbilly Bone,” from an upcoming album
Current Producer: Scott Hendricks
Hometown: Ada, Oklahoma
Management: Starstruck Mgmt. Group
Booking: William Morris Endeavor Entertainment
Recent Hits: “She Wouldn’t Be Gone,” “Home”
Special TV/Film Appearances: NBC’s Clash of the Choirs show; judge on Nashville Star; Shelton was named one of People Magazine’s “Sexiest Men Alive” in 2008.
Interesting Fact: Shelton heard about producer Scott Hendricks early on in Oklahoma. “I remember seeing a story on an Oklahoma City TV station about Scott Hendricks,” he says. “They said he was an Oklahoma guy who had moved to Nashville and made good, making these huge albums on big artists. I used to think, ‘It would be so cool to meet him some day. Maybe he’d give me a shot.’ Then, not long ago, he fell in my lap when he became A&R chief at Warner Bros. We decided we wanted to make this record together, and I’m really glad we did.”
Twitter: @BlakeShelton 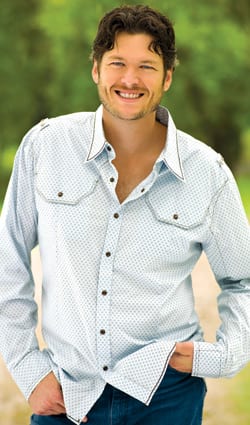 Blake Shelton’s journey to country stardom starts way back in his high school days in Oklahoma, when he was part of the entertainment for an event in hometown Ada honoring acclaimed Nashville songwriter Mae Axton. She saw him perform and told him she thought he could get a record deal if he moved to Nashville, and that she was willing to help. That convinced Shelton to move just two weeks after graduation. He worked with Hoyt Axton, Bobby Braddock and Earl Thomas Conley, among others, en route to his record deal. Eventually, he signed with Warner Bros. Nashville and his debut single, “Austin,” shot him straight to the top of the charts and stayed there for six weeks. It also became his first No. 1 video, in a series that would ultimately include “Heavy Liftin’,” “Goodbye Time,” “Home,” “Nobody But Me,” “Some Beach,” “Don’t Make Me,” “The More I Drink” and more.

Four more albums produced a string of hits, leading up to his fifth and most recent studio effort, Startin’ Fires. One of the project’s signature songs, “Home,” took Shelton into new musical territory, both vocally and stylistically. “This is something I’ve been wanting to do,” he says, “exploring richer melodies and challenging myself as a singer. I think this album is probably more autobiographical than anything I’ve ever done. While Pure BS was a kind of reflection of what I was going through at the time, this album is a reflection of who I am and the things I love and always have—driving back roads, drinking beer, being outdoors. People know these things about me, but I’ve never really had that in my music, and I’m finally dumping myself onto my album. It’s about who I am personally, and I hope other people can relate to it.”

His upcoming project is sure to have plenty of the elements that make Shelton the multidimensional artist he is—soaring melodies, passionate lyrics, a bit of romance, and songs that celebrate the country life. Shelton’s hot new single, “Hillbilly Bone,” is a duet featuring Trace Adkins and is the title track from his forthcoming Warner Music Nashville album.