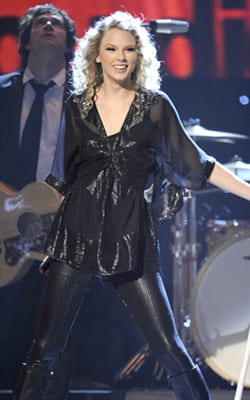 Taylor Swift is youngest to ever win CMA’s top Award [LA Times]
Country Music Assn. voters largely turned their back on tradition in anointing teenage country-pop star Taylor Swift and a whole slate of relative newcomers with most of its top honors at Wednesday’s CMA Awards ceremony in Nashville.

Taylor Swift: Young, fearless and in control [LA Times]
In 1958, Johnny Cash released the song “Ballad of a Teenage Queen,” the story of a pretty small-town girl who won Hollywood fame but gave it all up for the boy next door. In 2009 — on Wednesday night, actually, in Nashville, at the annual Country Music Assn. Awards ceremony — Taylor Swift updated and obliterated that story line.

CMA Awards 2009: all the performances as they happen [LA Times]
Opinionated reports on all the artist performances.

Taylor Swift sweeps CMA’s biggest honors [Tennessean]
In the end, it was Taylor Swift. Also in the beginning and in the middle.

CMA Awards best and worst, starring Taylor Swift, the ghost of Kanye West, and Carrie Underwood’s purple sequined hot-pants [EW.com]
Taylor Swift became the youngest person to win the Entertainer of the Year, the final prize given out last night at the 43rd annual Country Music Association Awards. And the restraint she showed on last week’s Saturday Night Live in not making a Kanye West joke went out the window at the CMAs