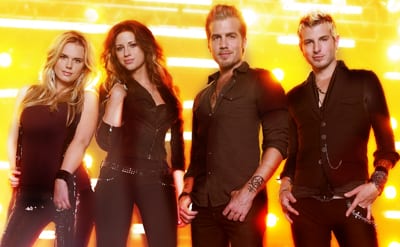 By any measure, Gloriana has become one of country music’s hottest young acts. Taylor Swift called on the four-member group to open her Fearless 2009 tour, and Brooks & Dunn and LeAnn Rimes have also chosen them for opening slots. They have appeared on Good Morning America and The Today Show, as well as Access Hollywood and Sirius/XM, among scores of others. Following the band’s recent Top 10 debut single “Wild At Heart,” they are now releasing “How Far Do You Wanna Go?” to radio.

Ultimately it’s the fans who have made Tom Gossin, Mike Gossin, Rachel Reinert and Cheyenne Kimball collectively one of 2009’s hottest new country acts. Gloriana’s self-titled Emblem Music Group/Warner Bros. Records debut premiered at No. 3 on Billboard’s Top 200 and at No. 2 on the Billboard Country Album Chart. The album had the best first-week sales of any new country artist in 2009, and “Wild At Heart” is the best-selling song by a new country artist in 2009, selling over 350,000 copies to date. The diversity of their appeal can be seen in the fact that they have appeared both on the Grand Ole Opry and in the pages of several magazines aimed at teens.

“I know how much music has impacted all of our lives,” says Tom. “It connects us all, it moves us and it can change a person,” adds Mike. “We hope that our music will do that for others for a long time to come.”