Kanye West interrupted Taylor Swift’s acceptance speech at the MTV Video Music Awards last night (9/13). As Swift began to accept her Best Female Video award for “You Belong To Me,” West jumped on stage, grabbed Swift’s mic and said “Taylor, I’m really happy for you, and I’m gonna let you finish, but Beyonce had one of the best videos of all time,” he said, as a surprised Beyonce looked on and the crowd began to boo West.” Swift did not finish her speech, but the crowed applauded her. Beyonce, who later won video of the year for “Single Ladies (Put a Ring on It),” graciously welcomed Swift back onto the stage to finish her speech. See video of the incident below (via mtv.com).

“Days You Live For” 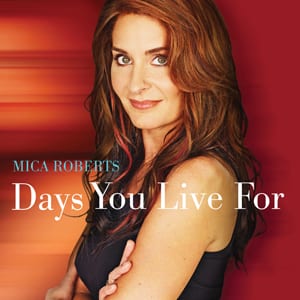 Mica Roberts’ new single release is “Days You Live For,” and the Oklahoma native is busy making the radio rounds to get the word out. A talented vocalist and musician who hit the road after high school, Roberts earned her performance stripes playing amusement parks, campgrounds and on a cruise ship before landing high profile jobs as an in-demand backup singer.

If you want to know Roberts, you are going to have to get to know her hometown Locust Grove, Oklahoma. A tiny town of 1400 people, Locust Grove is about 50 miles east of Tulsa and is still the place Roberts calls home. She still owns the family farm there where she grew up and forged her lifelong love of music.

When Mica arrived in Nashville she did everything she could to get a job. “I just wanted to stay there and support myself,” Mica recalls. “I waited tables and sang in a local club called the Bull Pen Lounge.” In 1997, nine years after she made the move to town, she she became Faith Hill’s background vocalist and toured with her for four years. This led to other opportunities from Billy Bob Thornton to her hero Willie Nelson and eventually head Show Dog Toby Keith, whom she has backed up for the past seven years.

“My dream is to make music with an edge and energy all its own,” says Roberts. “I draw inspiration from the people I’m around and from my life. I believe in the music I’m making and I know people will connect with it if given the opportunity.”

Awards season is getting underway, and the 20th Annual International Bluegrass Music Awards show has revealed the list of artists slated to perform. Scheduled for 7:30pm, October 1, at the Ryman Auditorium the show’s performers include hosts Kathy Mattea and Hot Rize, as well as Steve Martin with the Steep Canyon Rangers, Del McCoury, Dailey & Vincent, The Grascals, The Dan Tyminski Band, Russell Moore & IIIrd Tyme Out, Lonesome River Band, Dale Ann Bradley, Michael Cleveland & Flamekeeper, G2 Bluegrass Band, The Gibson Brothers, Danny Paisley and Junior Sisk, and Sierra Hull & Highway 111. The program includes the presentation of 17 industry awards to recognize achievement in bluegrass music, as well as the induction of The Lonesome Pine Fiddlers and The Dillards to the International Bluegrass Music Hall of Fame. 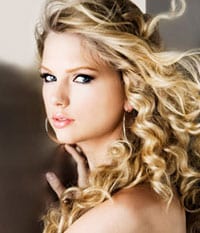 Taylor Swift will perform live from Radio City Music Hall on MTV’s Video Music Awards this Sunday (9/13). The show airs live on MTV at 8:00 p.m. (CT). Taylor is nominated for Best Female Video for “You Belong With Me.”

Taylor will make her first appearance on The View on Tuesday (9/15), interviewing with Barbara Walters and her co-hosts. She will follow the interview with a performance of two songs from her Fearless album. The View airs live on ABC at 10:00 a.m. (CT). 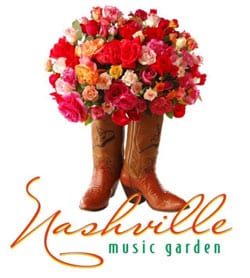 On September 29, Nashville will become the official home of the world’s first public garden to honor entertainment icons with a display of namesake flowers. The Nashville Music Garden, located at the corner of Fourth Avenue and Demonbreun in the Hall of Fame Park (across from the Country Music Hall of Fame® and Museum) is a one-of-a-kind “Garden of the Stars” that pays tribute to the artists, songwriters, authors, television personalities, industry leaders, venues, organizations, and icons who have made a positive impact on Nashville’s entertainment community.

The first 500 attendees will receive long-stemmed Rio Roses and biscuits from the Loveless Cafe. The event is free and open to the public. For more information, visit www.nashvillemusicgarden.com. 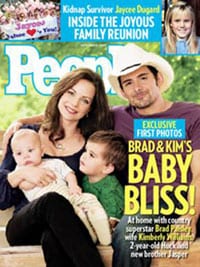 The Paisley family is featured on the cover of the current issue of People Magazine. The inside five-page spread includes the first photos of Jasper along with big brother Huck and gives the scoop on how Kimberly shared the news of her pregnancy with Brad, and how they share parenting responsibilities.

Excerpt from article: And while Huck can name every member of Brad’s band, the curious kid is still puzzled over what everyone else in the world does. “The greatest question he’s asked is, ‘Mommy, does Jesus play the banjo?’’’ says Brad. 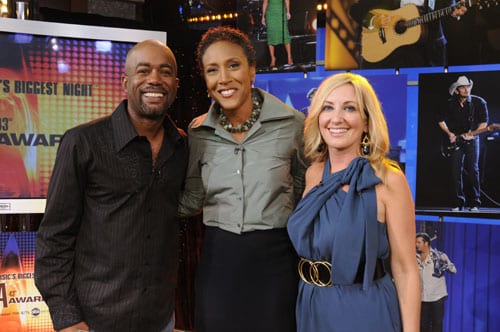 Editor’s Note: An oversight by CMA has been resolved, resulting in Paisley’s nomination count rising to seven, and Urban’s rising to four. They were inadvertently left off the original list of nominees in the Musical Event category.

Nominees for the 43rd Annual CMA Awards were revealed yesterday (9/9) morning, with Brad Paisley leading the pack with seven nods. Paisley was nominated for Entertainer; Male Vocalist; Album for American Saturday Night (produced by Frank Rogers and Chris DuBois); Single and Song for “Then” (songwriters DuBois and Ashley Gorley); Music Video for “Start a Band” with Keith Urban, which was directed by Jim Shea; and Musical Event with Urban for the same song.

Among the other highlights:

Strait now has 79 career total CMA Awards nominations, which ties him with Alan Jackson for the most nominations to date. He leads the trophy count with 22.

A powerhouse in the Entertainer of the Year category, Kenny Chesney has won the trophy four times. If he takes it home again this year, it will tie him with Garth Brooks for the most wins in the category.

If Carrie Underwood wins Female Vocalist again, it will tie her with Martina McBride and Reba McEntire for most wins in the category. McBride and McEntire are nominated as well. In fact, McEntire is the female artist with the highest number of nominations in the 43-year history of the CMA Awards with 48.

Brooks & Dunn are nominated for Vocal Duo, a category they have won a record 14 times. They have 19 trophies total.

Single of the Year (Award goes to Artist and Producer)

“I Run To You,” Lady Antebellum
Produced by Victoria Shaw and Paul Worley, Capitol Records Nashville

Love On The Inside, Sugarland
Produced by Byron Gallimore, Kristian Bush, and Jennifer Nettles, Mercury Nashville

“I Told You So,” Randy Travis

Music Video of the Year (Award goes to Artist and Director)
“Boots On,” Randy Houser, Directed by Eric Welch

“People Are Crazy,” Billy Currington, Directed by The Brads 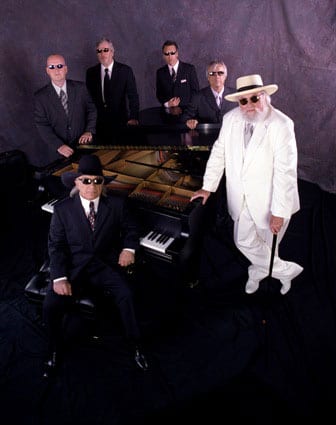 The Charlie Daniels & Friends annual Christmas For Kids Concert is slated for Nov. 23 at the Ryman Auditorium, with Gretchen Wilson and Phil Vassar among the special guests.

The Celebrity Tour Bus Show will also raise money by allowing visitors to tour the buses of more than sixty stars at the Hendersonville Wal-Mart from 5:00-9:00 PM on Mon., Dec. 14.

Christmas For Kids treats 400 children to a day-long Christmas shopping excursion, including a chauffeured trip from their school aboard an entertainer’s luxury tour bus, lunch and a party hosted by Santa and Mrs. Claus.

Tickets for the best available concert seating may be obtained by visiting www.Christmas4kids.org. Other reserved seating will be available starting Oct. 26 through Ticketmaster. 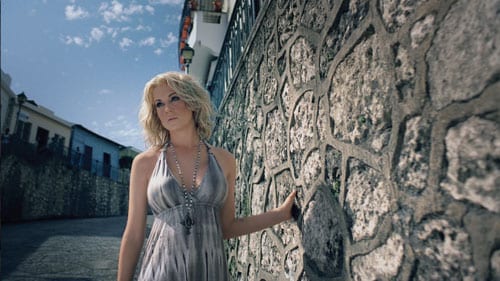 Kellie Pickler’s video for her newest single, “Didn’t You Know How Much I Loved You,” makes its world television premiere during CMT Top 20 Countdown tomorrow (9/11) 10:00–12:30 p.m. CT and online at CMT.com immediately following. Filmed in the Dominican Republic, the new video was directed by Roman White.

Universal Records South’s Phil Vassar is releasing his next single “Everywhere I Go” from his fifth studio album entitled Traveling Circus, in stores later this fall. “Everywhere I Go,” written by Vassar and Jeffrey Steele, is an emotional song about healing and remembrance. Listen to it here.
————————— 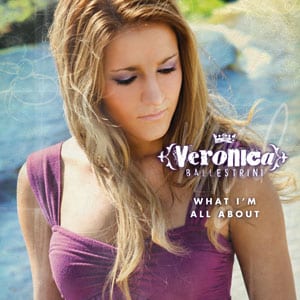 eronica Ballestrini’s debut album, What I’m All About, has been released exclusively online and features her lead-off single, “Amazing” which landed on MusicRow’s CountryBreakout Chart and is quickly climbing.

Produced by Cliff Downs (Whiskey Falls, Ashley Gearing), the album contains six songs Ballestrini wrote, including the hit “Amazing” and title track “What I’m All About.” The Connecticut native offers pop-country crossover and her album will be released on TimBob Records.

Currently Veronica is on the road visiting radio and playing dates across the country with recent shows opening for Natasha Bedingfield and Eric Hutchinson.

Bryan White’s new single, “The Little Things” has been shipped to radio with his eighth studio album, Dustbowl Dreams, set to be released digitally on Sept. 28. “The Little Things” co-written by White, James Dean Hicks and Erik Bledsoe, is available as a free download using a widget created by Maxx Company. The widget is complete with the story behind the song and a performance video of White. For a limited time, fans can view the widget and download the single on www.bryanwhite.com. He co-produced Dustbowl Dreams and co-wrote eight out of its ten songs.

White is a Grammy winner and has had six No. 1 singles, two platinum records, two gold records, and joined forces with Shania Twain for the monster hit, “From This Moment On.”