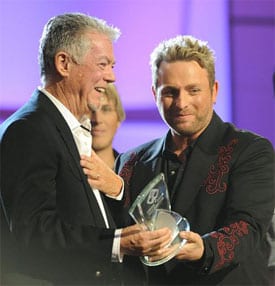 The 2009 Canadian Country Music Association (CCMA) Awards, held Sept. 13 in Vancouver, BC, and broadcast live on CBC Television, drew a record increase in viewership numbers with an astounding 60 percent jump from last year’s ratings.   ”Not since Shania has the CCMA Awards turned in numbers like this year’s show,” said Jim Cressman, Co-Chair of the CCMA Television Committee. “Obviously, the star power of icons like Reba and Martina McBride, coupled with a tremendous list of world-class Canadian performers that included Johnny Reid, brought eyeballs to our program.”

This year’s broadcast, directed by Morris Abraham and produced by Corkscrew Media, averaged 748,000 viewers for the evening, with ratings peaking at slightly more than 1 million towards the end of the program. A repeat broadcast of the show at midnight garnered an additional 60,000 viewers.  ”First and foremost, it was an amazing lineup of talent that made this year’s CCMA awards great,” said Corkscrew Media’s President/Executive Producer, Scott Henuset. “It was a pleasure working on this year’s show with the CCMA, CBC, CMT Canada and such a talented group of producers and the show’s director, Morris Abraham.”

The awards benefited significantly from the switch to a Sunday night broadcast and a strong lineup of performers, including American artists Reba and Martina McBride and Canadian acts Johnny Reid, Doc Walker, Terri Clark, Crystal Shawanda and Emerson Drive, among others.  Canadian actor and director Jason Priestley hosted the show.

Worldwide superstar Taylor Swift received a special CCMA award for Top Selling Album of the Year in Canada. She accepted the award via taped satellite address.

“Vancouver was a great host for this year’s Country Music Week and awards show,” said CCMA President Jackie Rae Greening. “Fans and industry professionals alike were treated to a wonderful mix of entertainment and educational panels and performances. The CCMA is once again thrilled that country music fans responded so enthusiastically to this year’s events.”     Encore airings of the 2009 CCMA Awards can currently be seen on CMT in Canada.