“Ain’t My Day To Save The World” 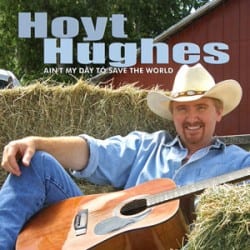 “Ain’t My Day To Save The World” is Hoyt Hughes’ debut single for Lofton Creek Records, a song that recasts the working man as a superhero who needs a little time off. The Lakeland, Florida native is currently working on his upcoming album.

Hughes was raised in a musical family with his dad being a singer and his older brother playing drums. “I can remember Dad gathering up the band and performing on the front porch. The whole neighborhood would end up in the yard before the night was over with.” With music abilities that continued to grow, Hoyt spent his childhood dreaming of a life in the country spotlight.

When Hughes met his wife, his passion for music accelerated. She pushed him to get on a stage one evening where his brother was playing. “I realized I had been bitten by the music bug and I haven’t looked away from the industry ever since.” He has taken the stage alongside artists including Charlie Daniels, Jett Williams and the Bellamy Brothers. Grammy winner and “Rose Garden” icon Lynn Anderson even personally invited him to sing at her birthday celebration.

“I couldn’t ask for anything more,” says Hughes. “To bring a smile to someone’s face or hear stories of how my music has changed a fan’s life is overwhelming. Sometimes, you can just see and feel the crowd and band connect at a live show. It makes me recognize that I am part of something that is much bigger than me and the band members. It’s those experiences that drive me to take the stage.”