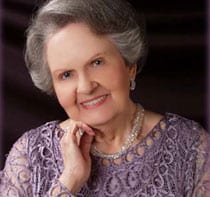 Gospel Music Hall of Fame member Eva Mae LeFevre, known as “The First Lady of Gospel Music,” died Monday (5/18), at age 91. She played piano, sang alto and was the emcee in the long-running gospel group The LeFevre Trio (later billed as The LeFevre Family and The LeFevres). She was born Eva Mae Whittington in a log cabin in rural South Carolina. Because she played piano and sang at her father’s revivals from the age of 4, she was regarded as the longest performing member of the gospel-music community.

She married gospel singer Urias LeFevre in 1934 and formed the trio with his brother, Alphus. They landed a daily radio show on WGST in Atlanta in 1940. In the years following World War II, she led the act to gospel stardom. During the 1960s, the LeFevres starred on the weekly TV show The Gospel Singing Caravan. The group recorded for Canaan Records, Sing Records and other Nashville labels. In 1978, LeFevre became the first living woman inducted into the Gospel Music Hall of Fame. Ten years later she became the first gospel-music inductee into the Georgia Music Hall of Fame. Urias died in 1979, and Eva Mae returned to the road in 1985. She was recording “Where Could I Go” with Bill Gaither and others in 1991 when she spontaneously sat at the piano and began to “jam” with the singers. The event became Gaither’s first Homecoming video, which is now a major franchise.