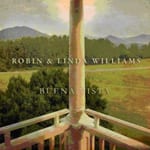 Robin & Linda Williams have been husband and wife, as well as musical partners, for more than 30 years. I find that inspiring. Even more inspiring is the on-going 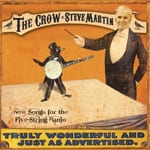 warmth in their sound and quality in their songwriting. Their Buena Vista is my Disc of the Day.

It seems kinda funny to discover a 63-year-old guy with decades of stardom in TV, stage and movie work, but this is Steve Martin’s debut album. And The Crow: New Songs for the Five-String Banjo is a classy piece of business. Therefore, it earns him a DisCovery Award.

EARL SCRUGGS/Foggy Mountain Breakdown
Writer: Earl Scruggs; Producer: Gary Scruggs & Randy Scruggs; Publisher: Peer, BMI; Rounder (track)
—In general, I dislike live albums. I find the crowd noise distracting and the sound quality usually sub-par. Both of those factors are in play on the Grammy nominated CD Earl Scruggs with Family & Friends, which was recorded at a Ryman concert in 2007. Having said that, the picking on this group of 18 tunes surveying the living legend’s career is jaw dropping in quality. Many familiar standards are here—“Salty Dog Blues,” “Earl’s Breakdown,” “In the Pines,” “You Ain’t Goin’ Nowhere,” “Soldier’s Joy,” “You Are My Flower,” “The Ballad of Jed Clampett” etc. Start with this classic, then mix and match with anything else and be dazzled.

DONNA ULISSE/Walk This Mountain Down
Writer: Donna Ulisse/Rick Stanley; Producer: Keith Sewell; Publisher: Uncle Hadley/Pop’N Paw, ASCAP; Hadley Music Group (track) (www.donnaulisse.com)
—Some of you might recall Ulisse as an Atlantic Records country stylist of the 1990s. Her transition to bluegrass has been a smooth one. The title tune to her latest is a gospel-infused toe tapper featuring some cool dobro work by Rob Ickes. Also check out the tragic story song “Levi Stone.” Producer Sewell has rounded up a stellar cast here—in addition to Ickes, it includes Andy Leftwich, Scott Vestal, Curtis Wright and Claire Lynch.

DRY BRANCH FIRE SQUAD/Echo Mountain
Writer: Billy Smith/Mac Elliott; Producer: Ken Irwin & Steve Chandler; Publisher: Mac Elliott, BMI; Rounder (track)
—Echoes of the Mountains is the latest from this long-enduring ensemble. Founded by Ron Thomason in 1976, Dry Branch Fire Squad has retained its soulful, rustic qualities throughout its existence. The group goes for feeling rather than virtuosity, which has led some to dub it “the missing link between old-time and bluegrass music.” On this haunting track you’ll be tempted to come down on the “old time” side of the equation. But on the scampering “Grayson’s Train,” you’ll probably want to switch that opinion. Adding to the conundrum is a repertoire here that stretches from 1985’s “Seven Spanish Angels” to 1927’s “Rovin’ Gambler,” not to mention “When You See Those Flying Saucers” (The Buchanan Brothers, 1947).

STEVE MARTIN/The Crow
Writer: Steve Martin; Producer: John McEuen; Publisher: none listed; 40 Productions/Amazon (track) (www.stevemartin.com)
—Yes, it’s that Steve Martin. Those who have followed his comedy career closely already know he’s a banjo player. Others might be surprised by this mostly instrumental collection. On its title tune, he proves himself to be more than adept on the five string. Vince and Dolly duet to his accompaniment on “Pretty Flowers,” Irish folk singer Mary Black makes an appearance on “Calico Train,” Tim O’Brien sings “Daddy Played the Banjo” and the star handles the vocal on the funny “Late for School.” But mainly the focus is on Martin’s ability as a picker. And on that, he gets an “A.”