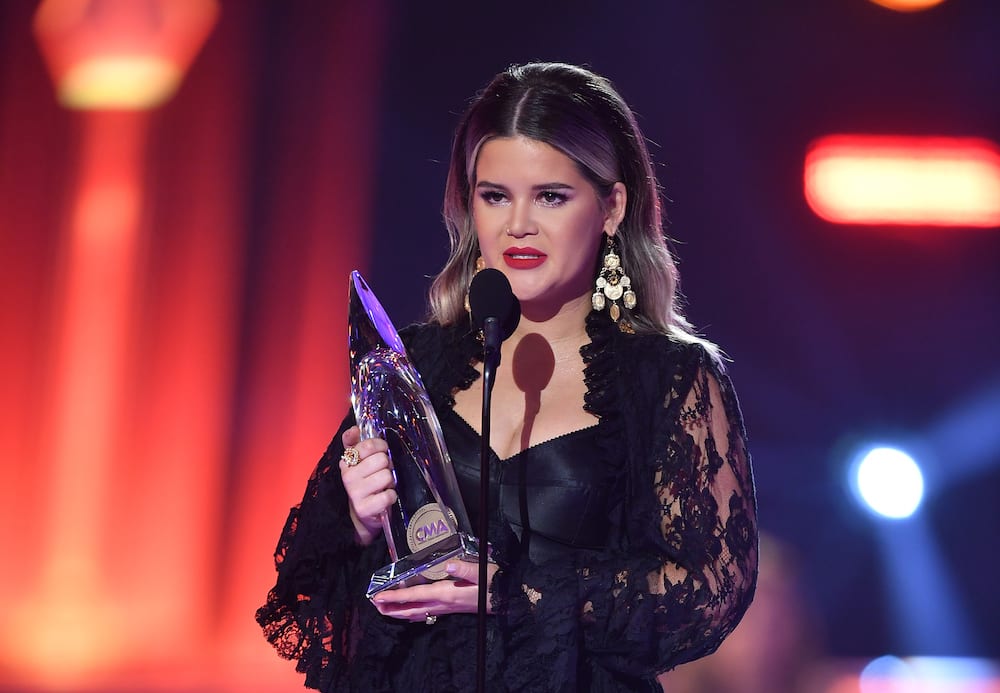 The 54th Annual CMA Awards were celebrated in Nashville tonight, airing live on ABC, and co-hosted by Reba McEntire and Darius Rucker.

Eric Church took home his first Entertainer of the Year honor, while Maren Morris earned three trophies, for Female Vocalist of the Year, as well as Single and Song of the Year, for “The Bones.” 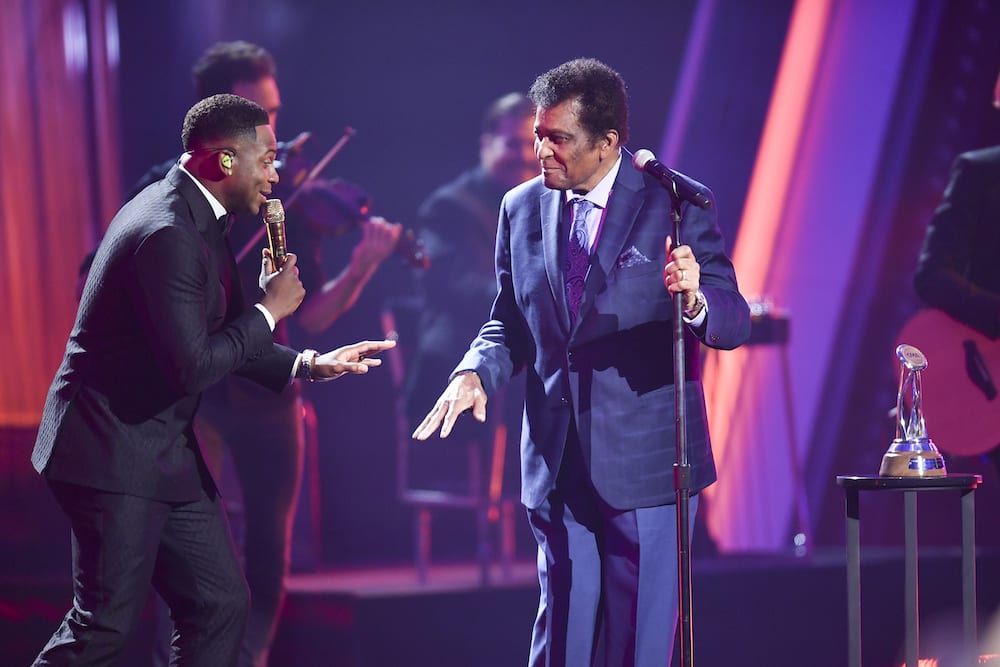 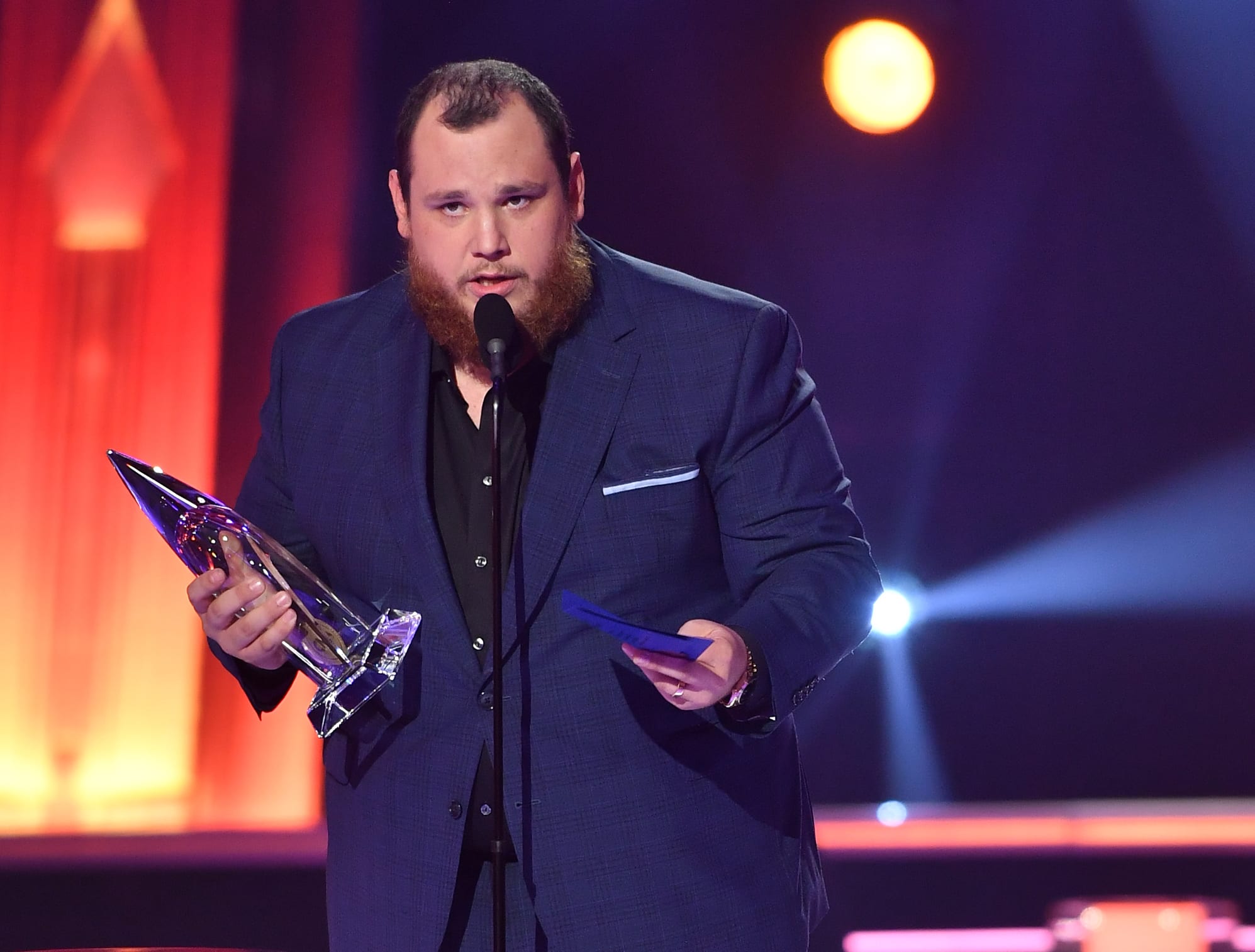 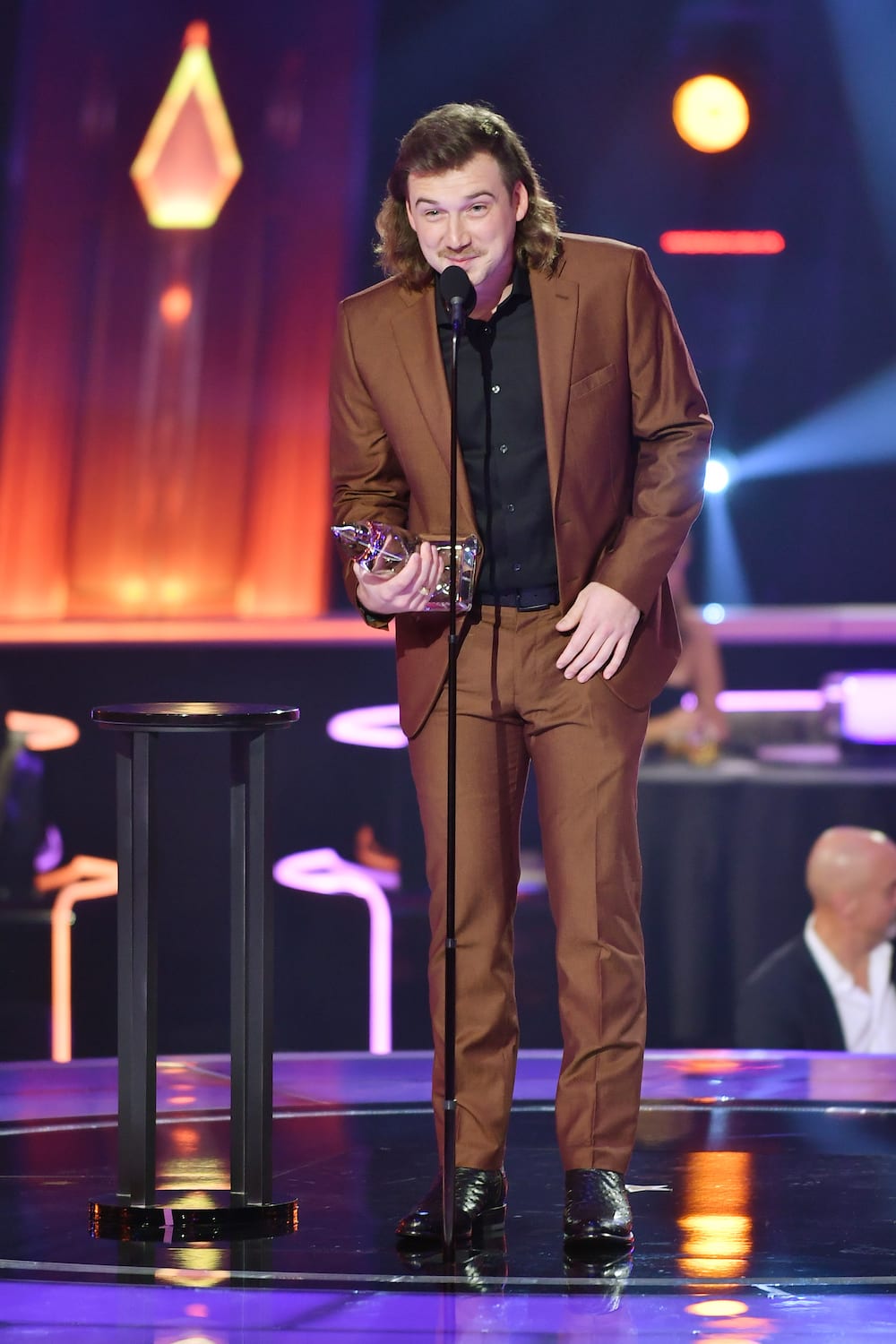 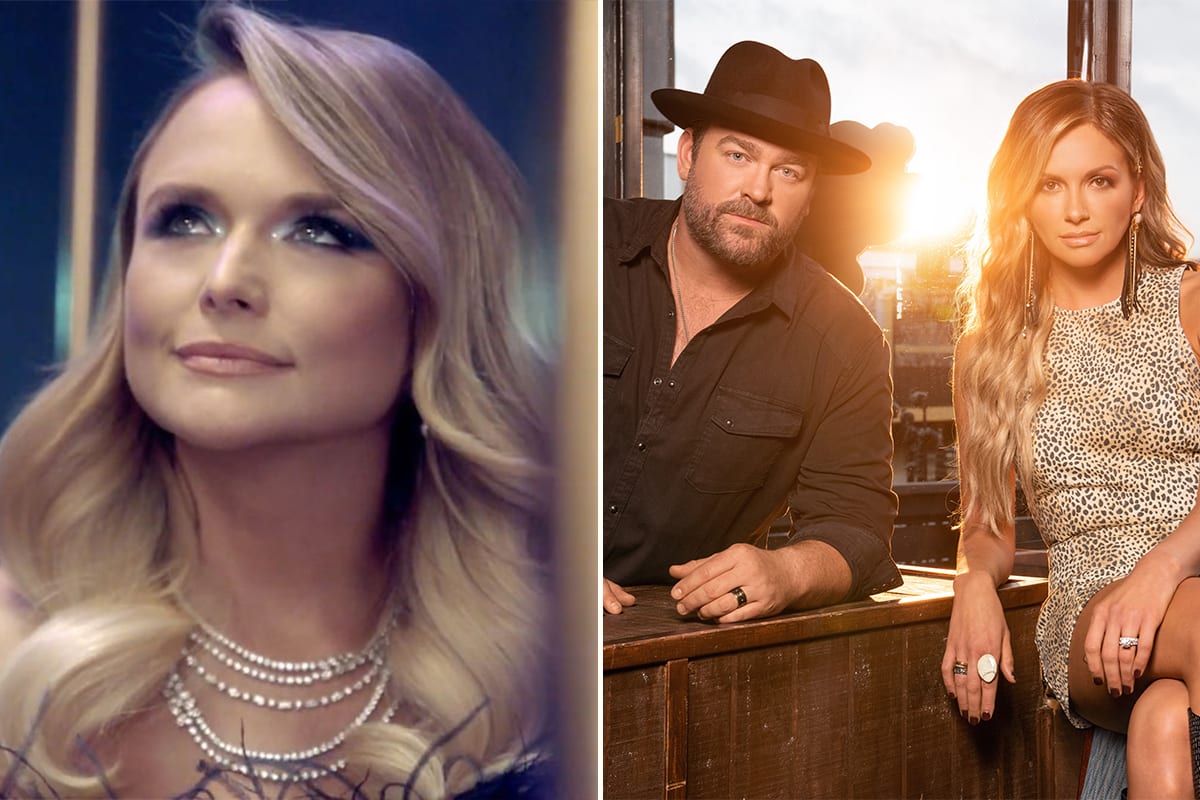 “I Hope You’re Happy Now” is also up for Song of the Year. Lambert leads the nominees tonight with seven nominations, breaking the record for most nominations by a female artist in CMA Awards history with 55 total career nods.

A final performer was also revealed for tonight’s CMA Awards. Country superstar Kelsea Ballerini will take the stage to perform her hit single “hole in the bottle.”

Additionally, hosts Reba McEntire and Darius Rucker will debut an emotional tribute to the late country music icon three-time CMA Awards host Mac Davis, with a performance of his “In the Ghetto.” The song, which the pair recorded last month, will be available on all DSPs at midnight ET, tonight, following their CMA Awards performance. 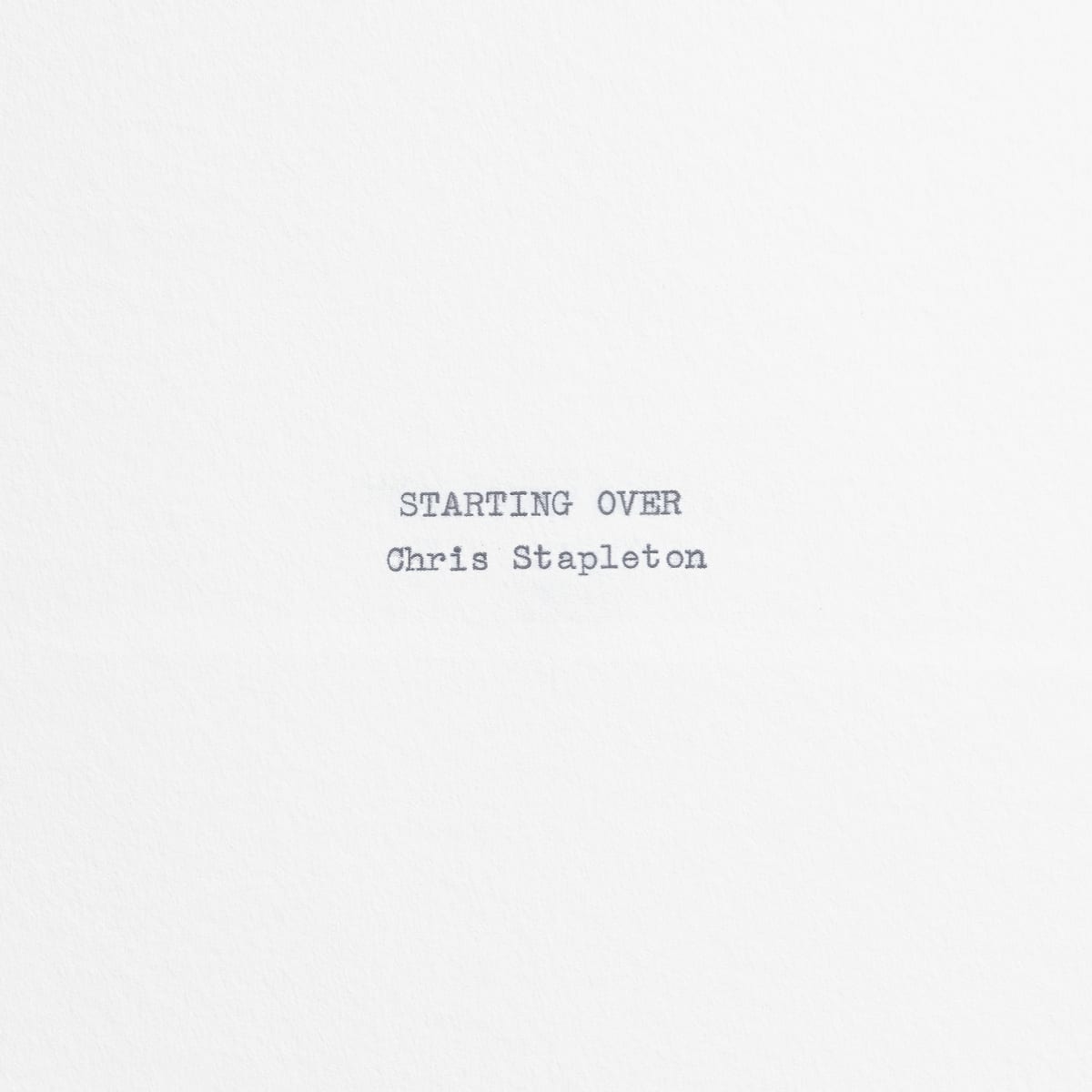 Rising to No. 1 this week on the MusicRow CountryBreakout Radio Chart is Chris Stapleton’s “Starting Over.” Penned by Stapleton and Mike Henderson, this is the title track to his latest album set for release next week (Nov. 13) via Mercury Records.

While Stapleton’s All-American Road Show tour was canceled in 2020, dates have been rescheduled for 2021. Visit chrisstapleton.com/tour/ for a list of new dates. 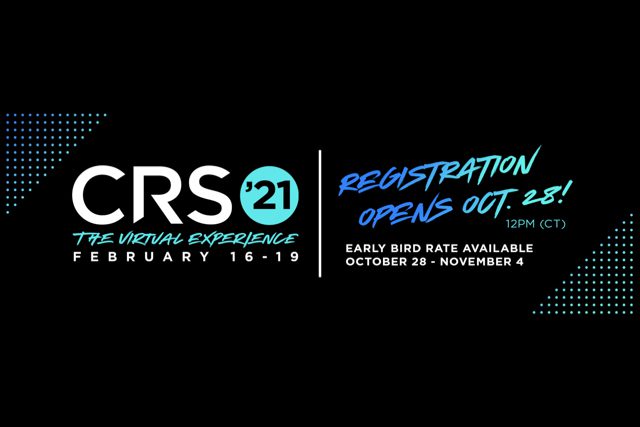 “The CRS Agenda Committee has been working hard to create educational, timely content for CRS attendees regardless of their section of the industry, market size, or employment status,” said CRS 2020-2021 Agenda Committee Chair, Brent Michaels. “Since the last CRS, our world and industry has changed, and we hope to provide anyone who makes the investment in the 2021 seminar, tools to face the consistent challenges of our industry, and to provide content that will lead to success with what we face on the horizon.”

More details on the sessions is below:

‘Til The Wellness Runs Dry: How to Handle the Anxiety of the Music Business: Elizabeth Porter, Founder and President of Entertainment Health Services, explains how anxiety affects us, offering clues to identify workplace triggers while providing tips on how to be the best you for yourself, and others.

21 Promotions in ’21: Attendees will receive 21 immediately executable promotions they can utilize to accomplish ratings and revenue goals in the face of reduced personnel, social-distancing, and fewer events.

Talk Data to Me: The authenticity and application of multiple radio callout, consumer research, and streaming data points will be probed, with a tutorial on the merits of each and how to apply all types of data to programming decisions.

Your 24/7 Brand: Radio in 2021 goes far beyond the dial. This session will discuss digital strategies for stations and talent in all market sizes to capitalize on branding, distribution, and content ROI.

TLC: Talent Loving Coaching: How do PDs and management coach on-air talent in a way that fosters creative freedom, with structure for growth and improvement? Successful PD/Talent combos discuss working relationships and how to accomplish mutual goals.

The expanded, four-day CRS 2021: The Virtual Experience agenda will offer attendees over 14 educational sessions, four morning networking events, three lunchtime performances, four interactive workshops, all-day networking, Bob Kingsley’s Acoustic Alley, and, for the first time in CRS history, a New Faces of Country Music ticket with every registration. More details surrounding the virtual agenda, including the newly launched Streaming Summit, will be released in the coming weeks and months leading up to CRS 2021: The Virtual Experience.

Early Bird Registration for CRS 2021: The Virtual Experience is now open at $149 per person and will be offered through Nov. 4. The registration rate will increase to $199 on Nov. 5. Registrations are available for purchase at countryradioseminar.com. 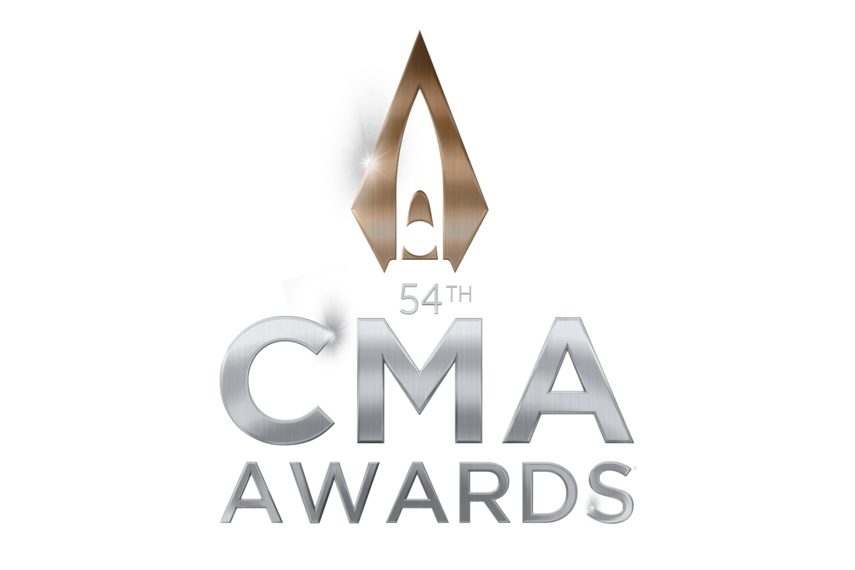 Reba McEntire and Darius Rucker are set to co-host this year’s CMA Awards, but they will also take the stage for an emotional tribute performance, the Country Music Association announced Thursday (Oct. 29).

Two-time CMA Awards nominee this year Gabby Barrett will be joined by Charlie Puth, making his CMA Awards debut to perform Barrett’s CMA Single of the Year nominated “I Hope.” Two-time nominee this year Thomas Rhett performs his CMA Musical Event of the Year nominated “Be A Light” alongside McEntire, Hillary Scott and Chris Tomlin. McEntire will also be joined by Rucker for a collaboration, while Rucker enlists nominees Lady A to perform his new single “Beers & Sunshine.”

Notably, the 54th Annual CMA Awards will mark the first time the biggest names in country music will come together safely, all in one room. The show will broadcast live from Nashville’s Music City Center Wednesday, Nov. 11 (8:00-11:00 PM/ET) on ABC.

“We are thrilled to have this incredible group of artists taking the stage at the CMA Awards this year! It is a privilege to bring these live performances to our viewing audience with the energy and excitement that the CMA Awards are known for,” says Sarah Trahern, CMA Chief Executive Officer. “And although the show will feel a bit more intimate this year, we look forward to hosting our nominated artists and their guests as we celebrate the best of country music in a fully safe and physically distant environment. It will be an honor to bring the biggest country stars in the world together – in one room – for the first time this year. You won’t want to miss it!”

The 54th Annual CMA Awards is a production of the Country Music Association. Robert Deaton is the Executive Producer, Alan Carter is the Director and David Wild is the Head Writer. 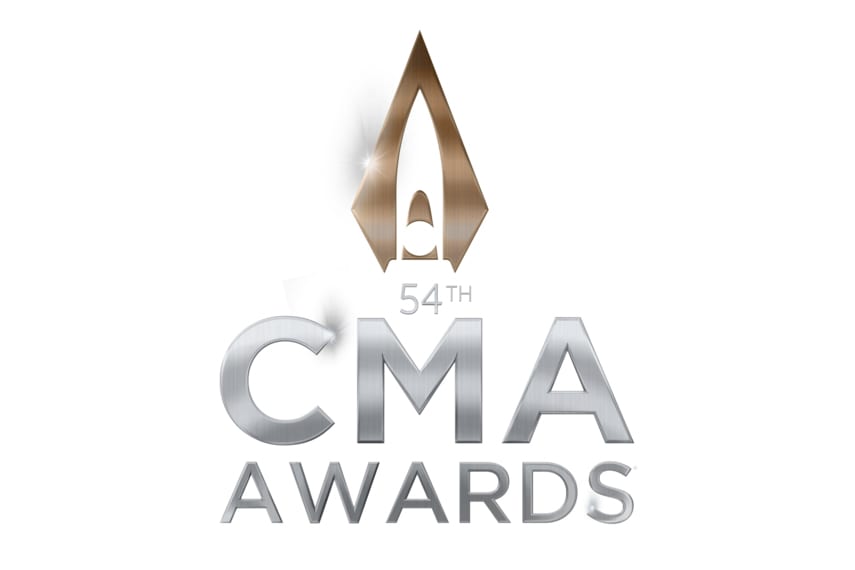 CMA members who are full-time, on-air personalities and CMA member radio stations in the United States and Canada were eligible. The entries are judged by a panel of distinguished broadcast professionals, representing all market sizes and regions.

CMA Broadcast Awards winners are not eligible to enter in consecutive years; therefore, those who received trophies in 2019 were not eligible in 2020. 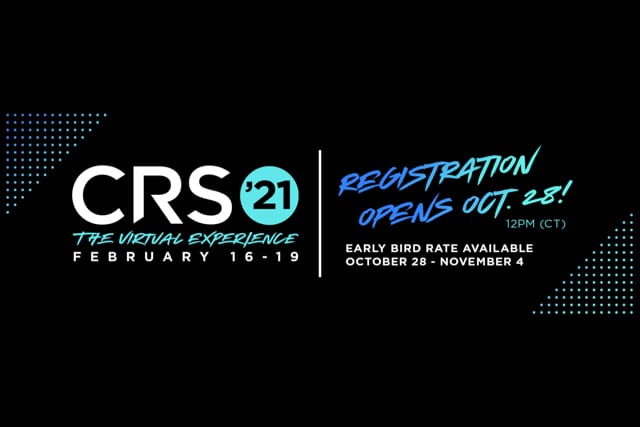 Next year’s online-only experience will include educational panels, virtual networking, and workshops. Every registration will include access to the New Faces of Country Music Show, Bob Kingsley’s Acoustic Alley, and the daily label lunchtime performances.

Kurt Johnson, CRB/CRS Board of Directors President, commented, “While we can’t be together at the Omni, we can still celebrate CRS together online. I look forward to seeing you all there…for CRS 2021!”

Luke Bryan has been confirmed for the annual “CRS Artist Interview,” sponsored by BMI.

Also new for 2021 is the Streaming Summit, which will be held Feb. 16 and will feature industry professionals and platform experts providing insights on trends, strategies, and best practices to optimize digital assets and streaming platforms.

Early Bird Registration for CRS 2021: The Virtual Experience will open on Oct. 28 at Noon CT / 1 p.m. ET at $149 per person and will be offered through Nov. 4.  The registration rate will increase to $199 on November 5.  All registrations include access to the 2021 New Faces of Country Music Show.

A CRS360 Webinar Session will be held at 11 a.m. (CT) Wednesday, Oct. 28, offering additional details, answering questions, and revealing more content featured at CRS 2021: The Virtual Experience. Only a limited number of slots are available for CRS360 and are based on a first-come, first-served basis. To register for the October installment of CRS360, sign up here. The Country Radio Broadcasters is taking questions in advance of the session. Inquiries must be received by close of the business day on Oct. 27 and can be submitted to [email protected]. 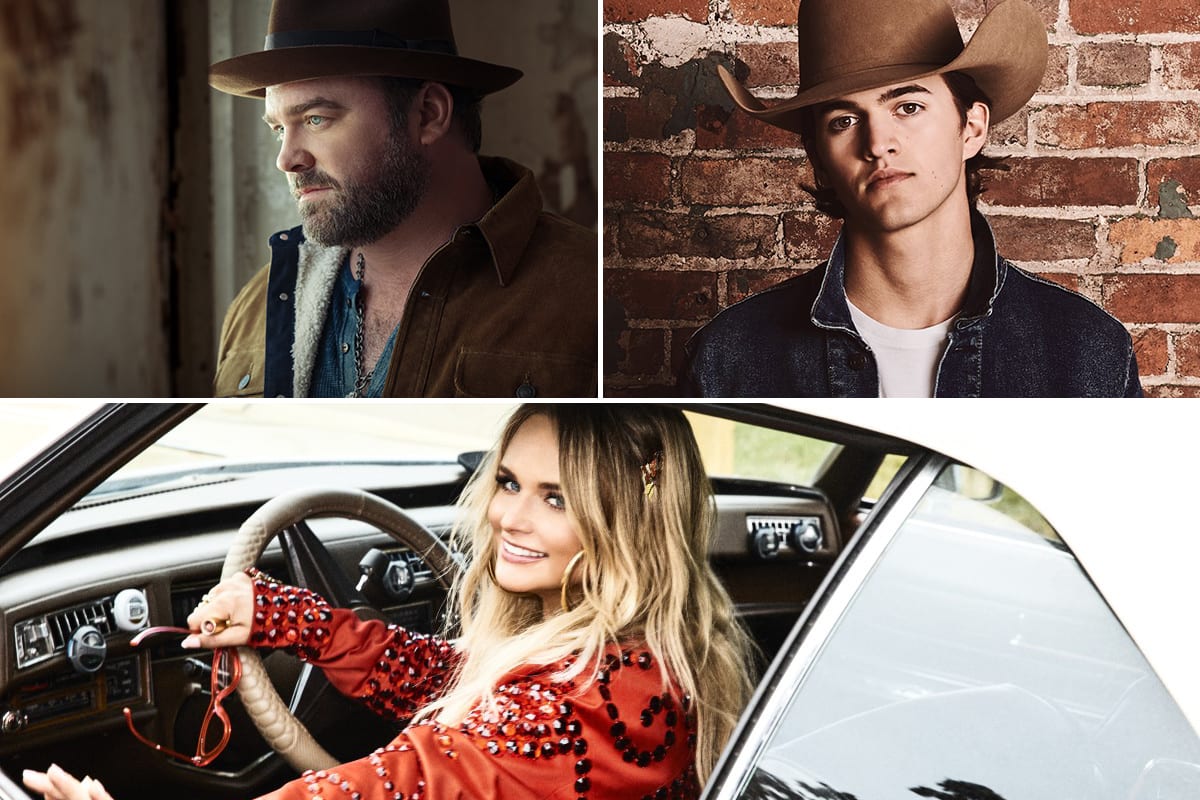 Today, we’re holding on to fading summertime as hard as we can, and as usual country music has the soundtrack.

There’s so much warmth to like here that the Disc of the Day award is being divided into categories. Our Male Vocalist winner is, hands down, Lee Brice. The best Female disc belongs to a reigning queen, Miranda Lambert. The group performance is “Pink,” which combines the talents of five women from multiple genres.

WALKER COUNTY / “Drag It Out”
Writers: none listed; Publishers: none listed; Producer: none listed; Warner
– Vocally smooth and languid, but produced with punch. The sisters’ harmony is ultra warm and close as they essay this lyric about getting the “goodbye” over with. The relationship is toast, so let’s make the going as painless as possible. Nicely done.

RYAN KINDER & SYKAMORE / “Doing Fine”
Writers: Ryan Kinder/Jordan Ostrom/Justin Morgan; Publisher: none listed; Producer: none listed; Warner
– This is a fiery male-female duet performance that builds in intensity as it unspools. One person can’t move on if the other person doesn’t hurt as badly. I have always liked this guy’s singing, and he’s just as potent with a harmony partner. Sykamore was discovered and brought to Nashville by Rhett Akins. She’s a winner, and this is definitely worth your spins.

MIRANDA LAMBERT / “Settling Down”
Writers: Miranda Lambert/Luke Dick/Natalie Hemby; Publishers: Sony-ATV Tree/Pink Dog/Emileon/Little Louder/Songs of Kobalt/Songs of Universal/Wrucke For You, BMIl Producer: Jay Joyce; RCA/Vanner
– An awesome, swirling production surrounds this lovely contemplation of a life lived as both a gypsy and a homebody. This lady always rocks my world.

ADAM DOLEAC / “Whiskey’s Fine”
Writers: Adam Doleac/Monty Criswell; Publishers: none listed; Producer: none listed; Arista
– I reviewed this song three years ago when he had it out as an independent artist. With a push by Arista, it’s now getting another shot. “Come on in, the whiskey’s fine,” he says to the old flame who knocks on his door in the dead of night. The lyric is sexy and his vocal delivery has passion.

DOLLY PARTON, MONICA, JORDIN SPARKS, RITA WILSON & SARA EVANS / “Pink”
Writers: Erin Kinsey/Jodi Marr/Victoria Shaw; Publishers: none listed; Producer: Victoria Shaw; Brighter Day
– Wilson is a breast-cancer survivor. This stirring, uplifting, all-star anthem looks to a better day when there is a cure, “when pink is just another color.” This disease will affect one in eight women in America. The 12th annual “Opry Goes Pink” show is this Saturday in support of Breast Cancer Awareness Month. It will star Wilson, co-writers Kinsey and Shaw, Lauren Alaina and Little Big Town.

ROBYN OTTOLINI / “F-150″
Writers: Robyn Ottolini/Erik Fintelman/Mark Schroor; Publisher: none listed; Producer: none listed; Warner
– She’s doing fine, getting over him and moving on with her life. Then she sees the kind of truck he drives and is flooded with memories and regret. The production rushes and crashes around her, then becomes suddenly still. Very effective.

CLARE DUNN / “We Are”
Writers: Clare Dunn/Mark Holman/Connie Harrington; Publishers: none listed; Producer: Clare Dunn; Big Yellow Dog
– She’s one of our finest current singers, and her throaty style is on full display here. The track rocks with plenty of frothing pop energy. It’s awfully hard not to get caught up in the excitement of this celebratory track.

JADEN HAMILTON / “Ain’t That Something”
Writers: none listed; Publishers: none listed; Producer: Matthew McVaney; Sony
– There’s something kinda warm and intimate in his singing. The overall vibe is a gently rolling Texas/Strait sound with sympathetic fiddle-and-steel-guitar backing. Very promising.

LEE BRICE / “Memory I Don’t Mess With”
Writers: Lee Brice/Brian Davis/Billy Montana; Publishers: none listed; Producers: Kyle Jacobs & Ben Glover; Curb
– What a powerful performance. He’s a mighty, mighty man. Brice depicts the anguish of seeing The One and being overcome with longing and regret that she slipped away from him. He piles ache on ache in this power ballad. It’s yet another master work by this artist.