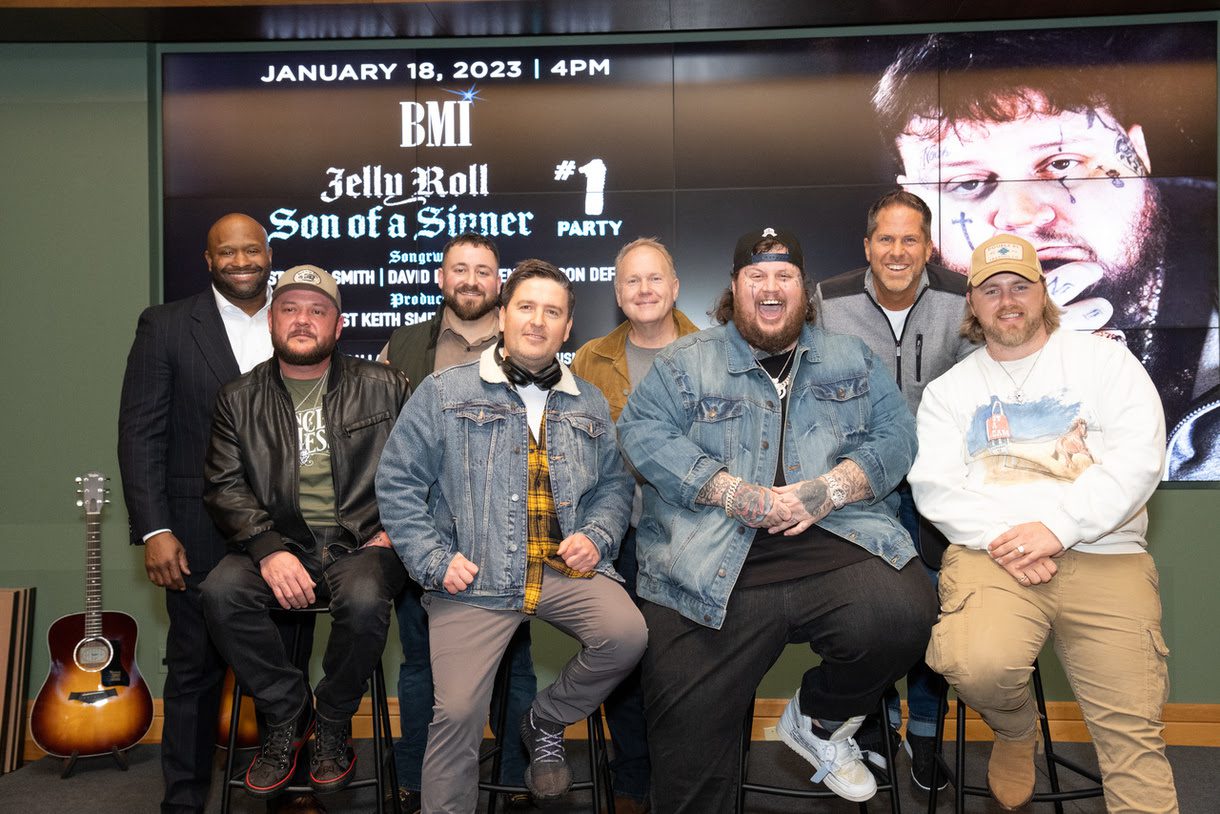 Music Row gathered at BMI Wednesday afternoon (Jan. 18) to celebrate Jelly Roll‘s No. 1 hit “Son Of A Sinner,” written by the Stoney Creek artist himself alongside David Ray Stevens and Ernest Keith Smith, who also served as a producer on the track along with Ilya Toshinskiy.

The celebratory tone was clearly set and immediately felt once one entered the BMI lobby. No. 1 parties often seem to create a comforting, upbeat communal atmosphere, and this event was no exception. The bar brimmed with smiling faces, and guests waited in line or huddled to watch as Jelly Roll’s cousin, tattoo artist Colby Hunter, permanently inked desiring attendees.

With each person came a blissful pump of energy, and the good vibes only seemed to grow as the sun went down.

BMI’s Clay Bradley called the crowd’s attention to the stage.

“I’d like to kick off this No. 1 celebration by saying how much I appreciate Jelly Roll and his team, Jon Loba and his team, Ernest, David Ray, Kimberly Gleason, the Big Loud family, Chris Oglesby, Troy Tomlinson and everyone here at BMI who makes this happen. We all came together two weeks ago as this song was reaching No. 1, and here we are today as a community coming together to capture this historic moment,” stated Bradley. “Thank for coming and celebrating this awesome song.”

He handed the mic over to BMI’s Shannon Sanders, who amped up the room, leading all of us in cheers as he transitioned to thanking everyone involved in “Son Of A Sinner.”

“There’s something about this [song] that’s hitting a little different,” he continued. “I couldn’t be prouder of my brother Jelly Roll, who I’ve known for at least half of his life.”

He then welcomed Jelly Roll, Smith, Stevens and Toshinskiy onto the stage. In honor of their first country No. 1, Sanders presented Jelly Roll and Stevens with Taylor guitars on behalf of BMI.

Smith recalled first seeing Jelly Roll when a friend of his sold her car to him in high school. He notes that they hung out a year later and bonded over their love of rap music.

“Rap got me in the door for all of this. I’ve always loved rap, so I was looking up to Jelly Roll for freestyle rapping. You wouldn’t have been able to tell me that day that we would have a song at country radio, much less one that rang the bell at No. 1,” he confessed.”Our journeys have been so different but they both started within a 10 mile radius of each other.”

Toshinskiy followed by returning the shoutout to Smith, who brought him in on the project. He told us he was instantly hooked by the emotion elicited by “Son Of A Sinner” when he first heard the demo.

Stevens was up next, and wasted no time sharing what this milestone meant to him.

“I walked into this building for the first time as a young father looking for a job. To walk through these doors today as a co-writer on a No. 1 song at country radio is a lifelong dream come true. I’ve known and made music with Jelly for over two decades, no one is more deserving of this. His heart is pure, his determination is unmatched,” he shared.

Turning to the genre-blender Stevens added: “With no doubts, I believe God has you right where you’re supposed to be. I’ve watched you grow as an artist, father, husband, businessman, and a friend. I couldn’t be prouder.”

He finished by thanking all of project’s contributors as well as his family for their support.

Giangreco congratulated the celebrated industry members and the work that went into the hit. He also took time to sing Smith’s praises, noting that “Son Of A Sinner” marked his eighth No. 1, and he ended the year as No. 3 on the Billboard Hot Country Songwriters chart as well as No. 20 on the Hot 100 All Genre chart, two spots above Drake.

Tomlinson took over and discussed how the song “oozes with truth.” He went on to recognize the four guys individually, sharing snippets of his relationship with each of them. He informed the honorees that, in addition to their plaques, Universal Music Publishing would make a donation to MusiCares in honor of the hit.

Next, Sanders introduced Country Aircheck‘s Chuck Aly, who explained the conversation and debates that seek to define the country format.

“When it comes to ‘Son Of A Sinner’ and Jelly Roll, the conversation is over, it’s settled science. This is country music,” Aly declared.

BBR’s Jon Loba stepped up and gave a heartfelt thank you and congratulations to the men on stage, his collaborators, partners and staff, as well as Jelly Roll’s team and family, the Grand Ole Opry and the press. He reminisced on first meeting Jelly Roll through BBR’s Adrian Michaels, and how they almost didn’t work together.

Loba concluded by saying: “Jelly, thank you for putting your trust in us, brother. Our [relationship] is one of the greatest I’ve ever had in my life. I got into music because I wanted to make a difference, and you’re helping all of us do that. Thank you for you trust, your vulnerability and your honesty. Every night you’re saving lives and changing lives. That vulnerability that you’re so willing to share with everybody is so important and makes you who you are.”

He closed with, “[Jelly Roll] will be making music and connecting in arenas and stadiums for decades to come.”

Before introducing the man of the hour, Sanders made a point to recognize that Jelly Roll had not only sold out Bridgestone Arena, but the Antioch native had turned around and donated the proceeds to Nashville’s Juvenile Justice System.

Finally, Jelly Roll took the floor and acknowledged each of the guys sitting next to him.

“Like Shannon said earlier, I’ve known Shannon and David half of my life. I’ve got friends in the music business [that I started this with]. We were kids dreaming this together. [Stevens] is an incredible writer and I’ve always known it. I’ve always been in rooms with him and here he is, celebrating his first No. 1.” He added, “It’s special for me to have Ilya here, because we were brought together for music only. Ilya was Ernest’s go-to guy. [He] came in and I loved everything he did.”

Jelly Roll then addressed Smith. “Ernest has always had it, man. He came on my radar because he was the best rapper at his high school. He’s always had it, and he’s been a friend,” he said. “For the man that wrote ‘Flower Shops’, he deserves a flower shop and I want to give it to him.”

He continued by thanking Michaels and recounted their first interaction and how it led him to meeting Loba.

“We fell in love, it was an instant thing. There was no hesitation, we both got it and spoke the language.”

The artist moved on to thank the BBR radio team, sharing funny stories of their radio tour travels, and shouted out the publicity team as well as the rest of the label. He announced to the audience that this was just the start of his country music journey.

“This was about me getting into country music. We’re finishing a country music album. We’re going to release it at the end of May, I hope, I’m screaming for it, and we’re here to stay. This is way bigger than just a song, y’all. This is the beginning of a career. The hometown boys brought it home.”