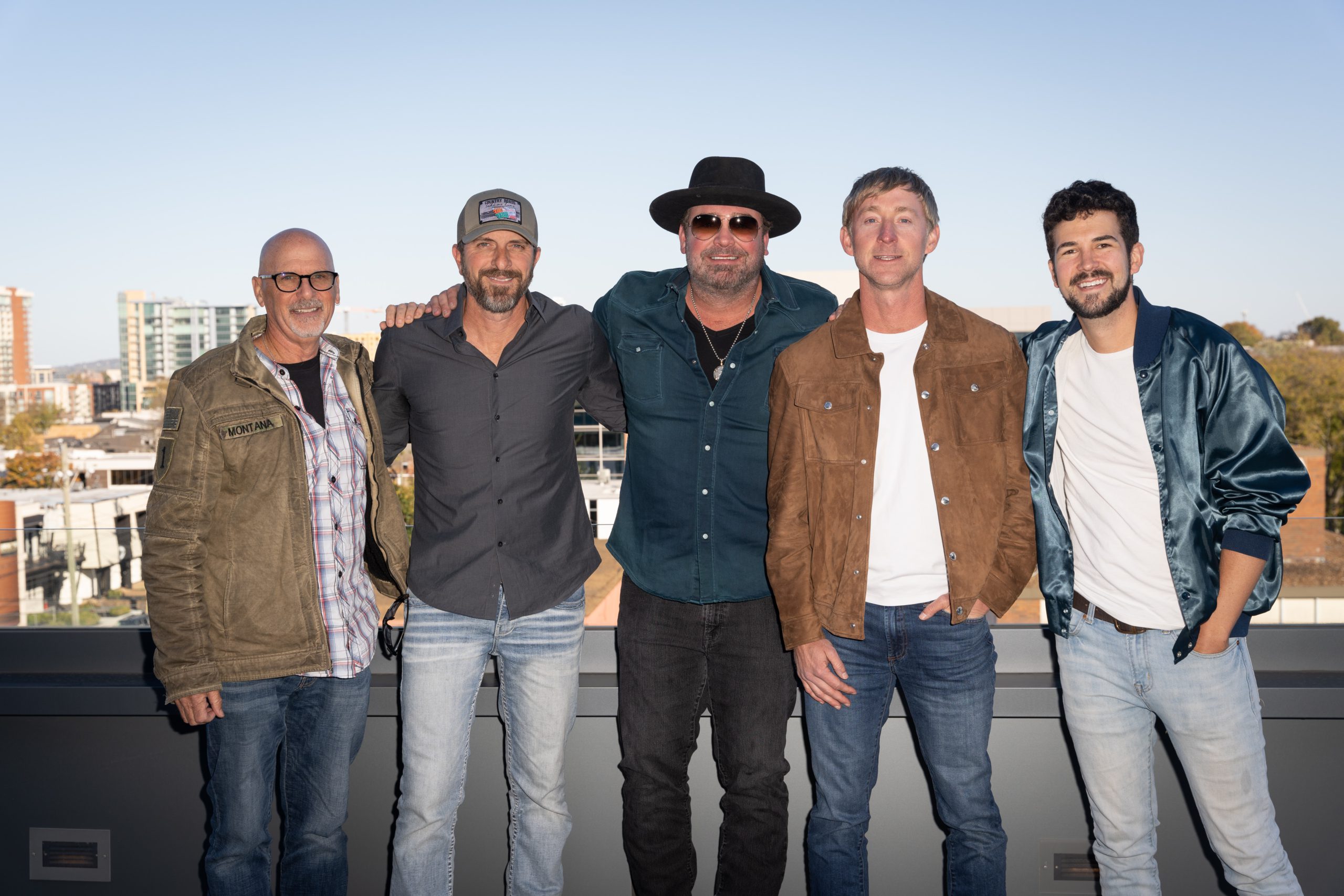 Lee Brice, songwriters, and industry members alike gathered at Nashville’s SESAC office on Wednesday (Oct. 19) to celebrate the tenured artist’s two most recent No. 1s–”Memory I Don’t Mess With” and the history making “One Of Them Girls,” which spent three weeks in the top spot.

Hosted by SESAC’s Shannan Hatch, all three of Nashville’s PROs were accounted for at the afternoon’s festivities, which was fitting, seeing as “One Of Them Girls” was named Song of the Year at each respective PRO’s 2021 awards—the first time a song has accomplished this feat.

All of the writers were invited up to celebrate the songs together—both of which Brice co-wrote—including Brian Davis and Billy Montana who penned “Memory I Don’t Mess With” and “One Of Them Girls” writers Ashley Gorley and Ben Johnson. Dallas Davidson, who also co-wrote the latter, as well as the track’s co-producers, Ben Glover and Kyle Jacobs, were unable to attend. 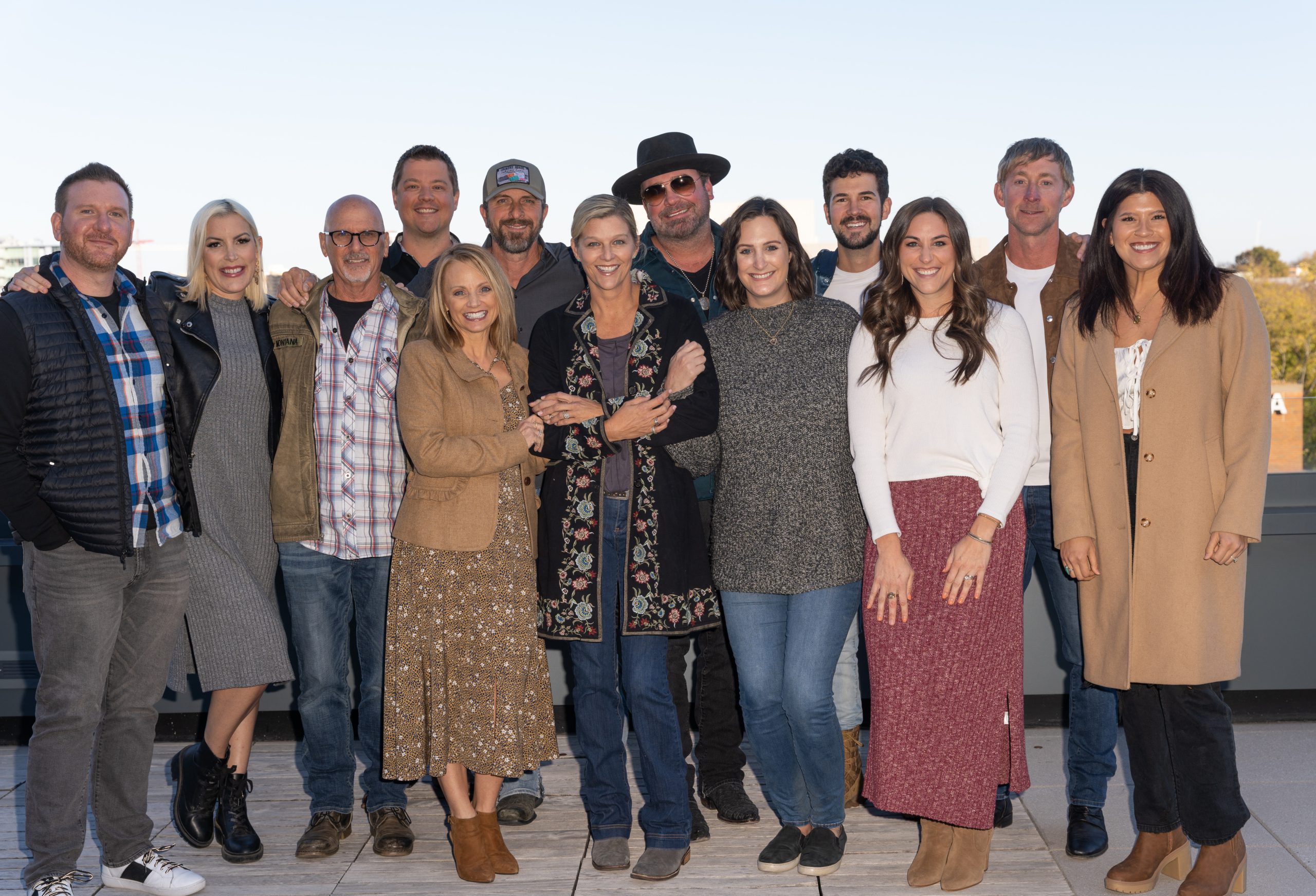 Filled with Hatch’s signature humor, she noted that Brice has had more than 10 No. 1 hits as a recording artist and/or songwriter. She also mentioned his skill of balancing family and work, as well as how great of a writer, vocalist, father, husband and friend he is.

BMI’s MaryAnn Keen took the mic next to congratulate all of the BMI writers. For “One Of Them Girls,” she cited Davidson’s impressive 27 No. 1s as a songwriter, his more than 30 BMI awards, and his own business endeavors with Play It Again Music. Keen then spoke to Johnson and his last few years of success as a songwriter, including having 6 songs in the top 20 simultaneously. Keen then turned to Montana for “Memory I Don’t Mess With,” looking back on his previous chart-toppers in Jo Dee Messina‘s “Bring On The Rain,” Sara Evans‘ “Suds In The Bucket” and Jon Pardi‘s “Night Shift.” She also took the crowd through Davis’ journey as a songwriter, congratulating him on his newest hit.

Kele Currier from ASCAP came up to round out the PROs and to speak about Gorley, who she explained has “raised the bar for this beloved songwriter and publishing community.” Listing off his impressive list of accomplishments from ASCAP, Billboard, CMA, iHeart Radio and becoming the newly-crowned NSAI Songwriter of the Decade, she also explained that through all of this, Gorley is still humble and is always looking to lift up promising writers through his own Tape Room Music.

Next, it was time for the publishers to share their sentiments, beginning with Curb’s Colt Murski who shared Montana’s background from farmer, to hit recording artist, and eventually to multi-Platinum and award-winning songwriter. Noting that this was Montana’s fifth No. 1 and his second with Brice (“Hard To Love”), Murski praised Montana, as well as the other “Memory I Don’t Mess With” writers. He also gave a shoutout to Mike Curb, the Curb promotion team, the producers, and Enzo and Anthony DeVincenzo at Red Light Management.

Tape Room’s Kelly Bolton was next, mentioning that “One Of Them Girls” was Johnson’s first of now seven No. 1s as a songwriter. She commended his work ethic and his gift as a musician and a writer. She also thanked the veteran writers who took a chance on the then green Johnson, saying that’s what makes Nashville special. 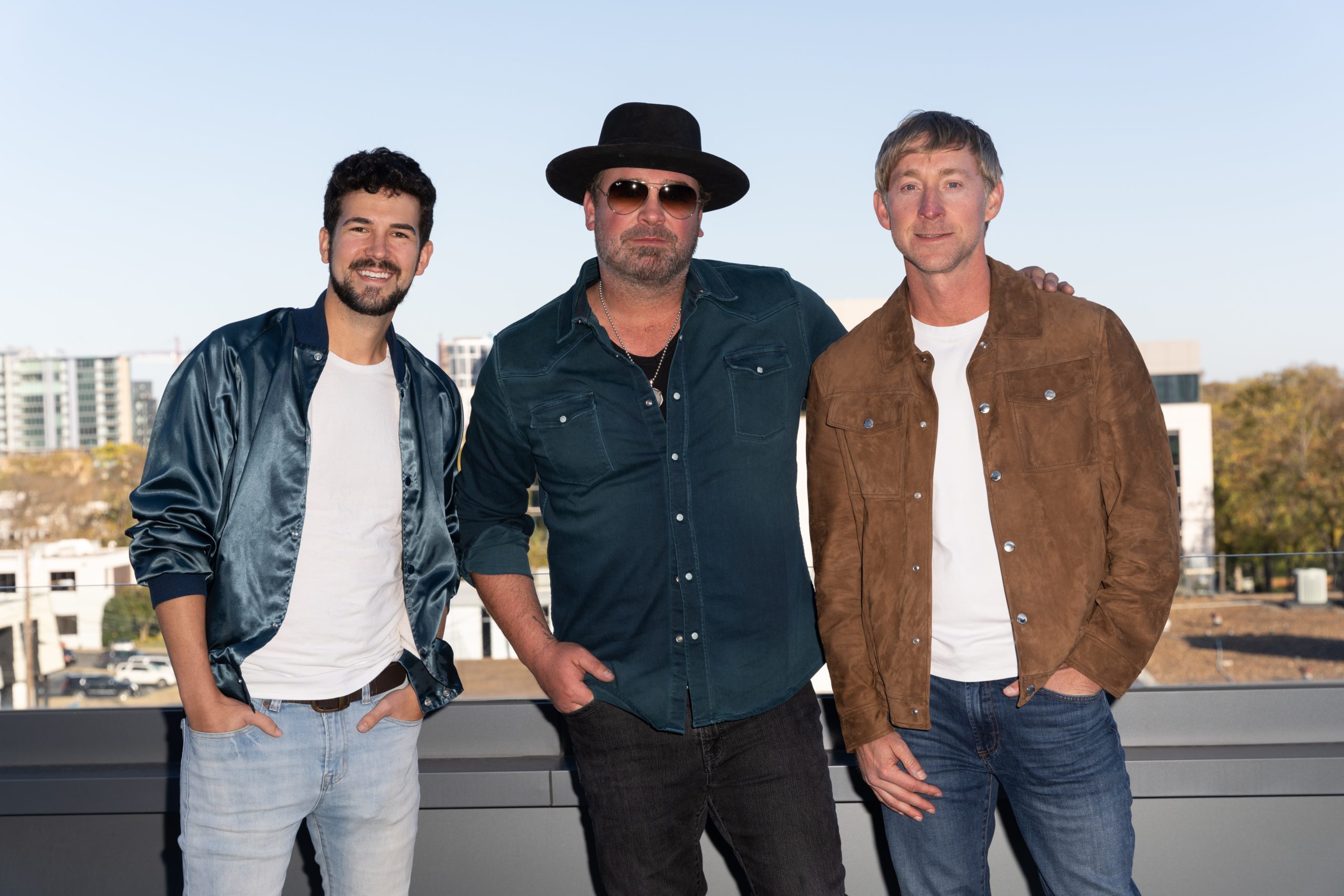 Bob Squance from Round Hill took his turn next. Keeping it short and sweet, he gave his congratulations to Brice, the producers, the Curb Records team, the publishers, and all of the PROs. He also mentioned that in lieu of plaques, Round Hill had made a charitable donation on behalf of each writer to My Life Speaks, the Georgia Music Foundation, and Music Health Alliance.

Finally, Anthem Entertainment’s Courtney Crist followed to honor the “Memory I Don’t Mess With” guys, as well as the Curb promotion team and management. She took a moment to recognize Davis’ great writing, focus, and intentionality.

Moving on to the writers, Lauren Leui from Play It Again opened for the “One Of Them Girls” guys, filling in for the sick Davidson by sharing a letter the writer had prepared which apologized for his absence, as well as thanked Leui and the rest of his staff, Round Hill, and the writers.

Leui read, “This is a song I’m extremely proud of and I’m very grateful that I got to write it with two old friends in Lee and Ashley and a brand new friend in Ben.” Taking a moment to speak to each of his co-writers, Davidson concluded by giving his thanks to Curb, BMI, Hatch, and the DeVincenzo’s.

Johnson stepped up to the mic next, commending his co-writers for taking a shot on him when they wrote “One Of Them Girls.” He also shared the story behind the night they wrote the song on Father’s Day when he was on the way to Mississippi to be with his dad. Getting a call from Gorley, Johnson explained that it was “the best U-turn [he’d] ever taken,” which earned quite the reaction.

“This couldn’t be a more special song. Thinking back on my journey to get here, it’s so surreal. You always dream getting a No. 1, and [it’s surreal] to have it be with these people,” Johnson gushed. “This lyric is so empowering to so many women and it made me think about all the women in my life who meant so much to me,” he shared as he thanked his grandmother, mom, sister and wife, as well as the PROs, Curb, Brice, and more.

Gorley came next, laying on his appreciation for everyone already mentioned and giving a shoutout to his wife and dad who were in the crowd. He made a note of Brice’s time in town and the work he’s put in to become a prominent force in the industry. He also gave a shoutout to all of the publishing partners and his team at Tape Room.

“It was just really fun to be out there on the farm [writing this song that night]. That’s what it’s all about and those memories are just awesome,” Gorley shared. “This song is still getting played a lot, which is amazing… Everybody did a great job and I appreciate you guys.” 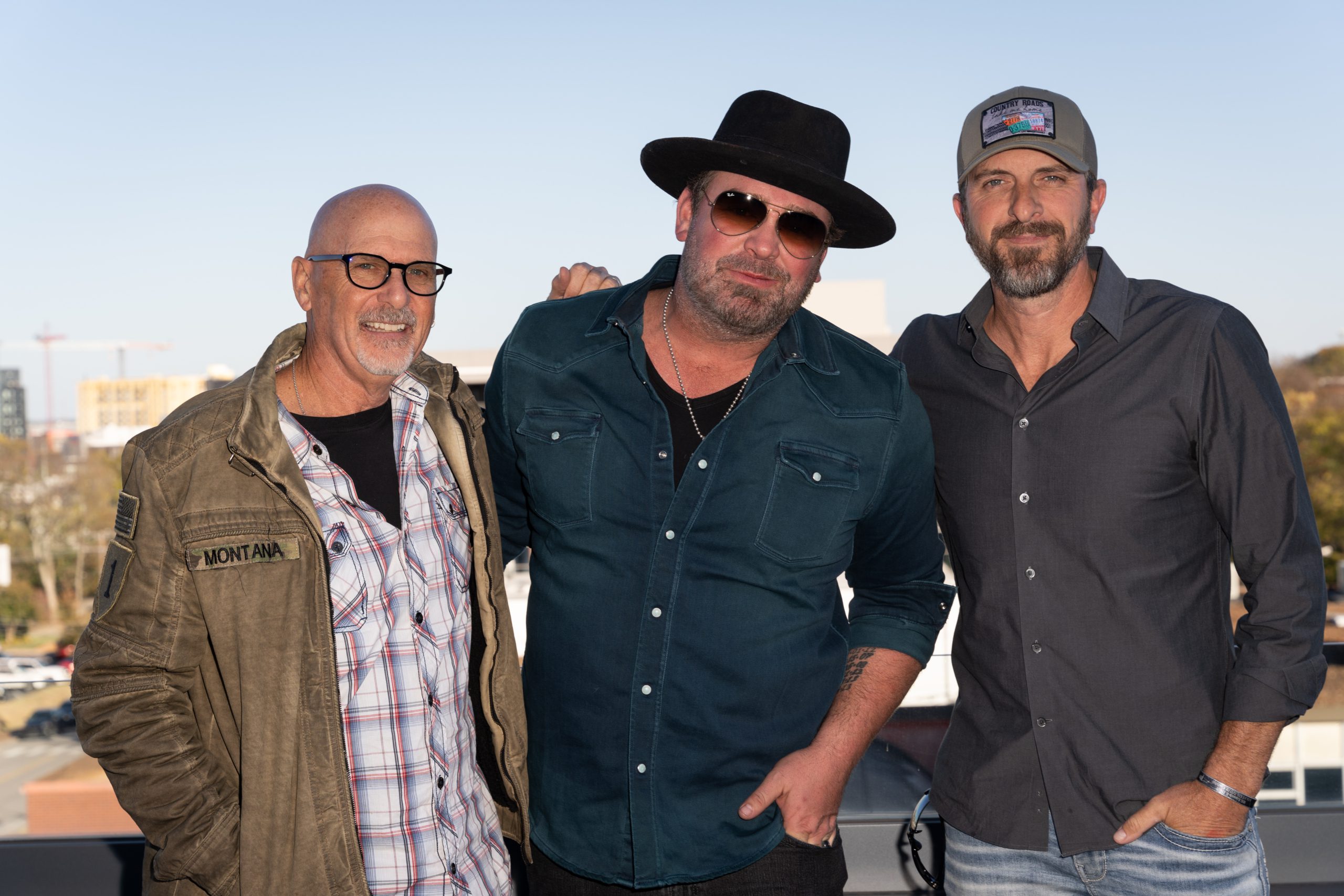 Montana took over from there switching gears to “Memory I Don’t Mess With.” He shared his appreciation for the Curb promotion team, BMI, his wife with whom he just celebrated his 40th anniversary, and the man of the hour, Brice.

“[Brian and Lee] got this song started and I’m just blessed that you brought me in on it. People have said before how awesome it is to be able to make music with your friends, but these guys are more like brothers,” he put simply. “Events like today give you a real picture of what family is about and how we’re cheering for each other, rooting for each other and celebrating with each other. Thank you all for being here to be a part of this. I feel overwhelmed and blessed.”

Davis echoed the many thanks of everyone before him, as well as the people in Nashville who fight for songs. “There’s such a crew in this town that still believe in songs and they’re down to fight for them. It takes a lot to make a song, starting with an idea all the way to a party like this. There’s so many people that make it happen and I’m grateful for everybody involved.”

He reminisced on his journey with Brice over the last 15-plus years, sharing his appreciation for the powerhouse entertainer, and teased at the new music to come.

After a full afternoon of laughs and thank you’s, it was time to hear from Brice. He gave his across the board appreciation for everyone previously mentioned and those not named.

“It would be easy to [not come together to celebrate this], but it’s not just [any one of us writers] on a song. It’s all the people that everybody has been thanking and more. It’s this whole community,” he explained. “None of this happens without an army, a team, and everybody involved.”

He took a special moment to honor his wife, noting that everything he does is half thanks to her for allowing him this career and supporting him along the way. Sharing his thoughts and love for each of his co-writers and his team, he concluded by saying, “It starts with a great song but there’s so much more that goes into it. I appreciate everybody here. I love you guys and we’re going to keep doing this, hopefully, if y’all will have me.”