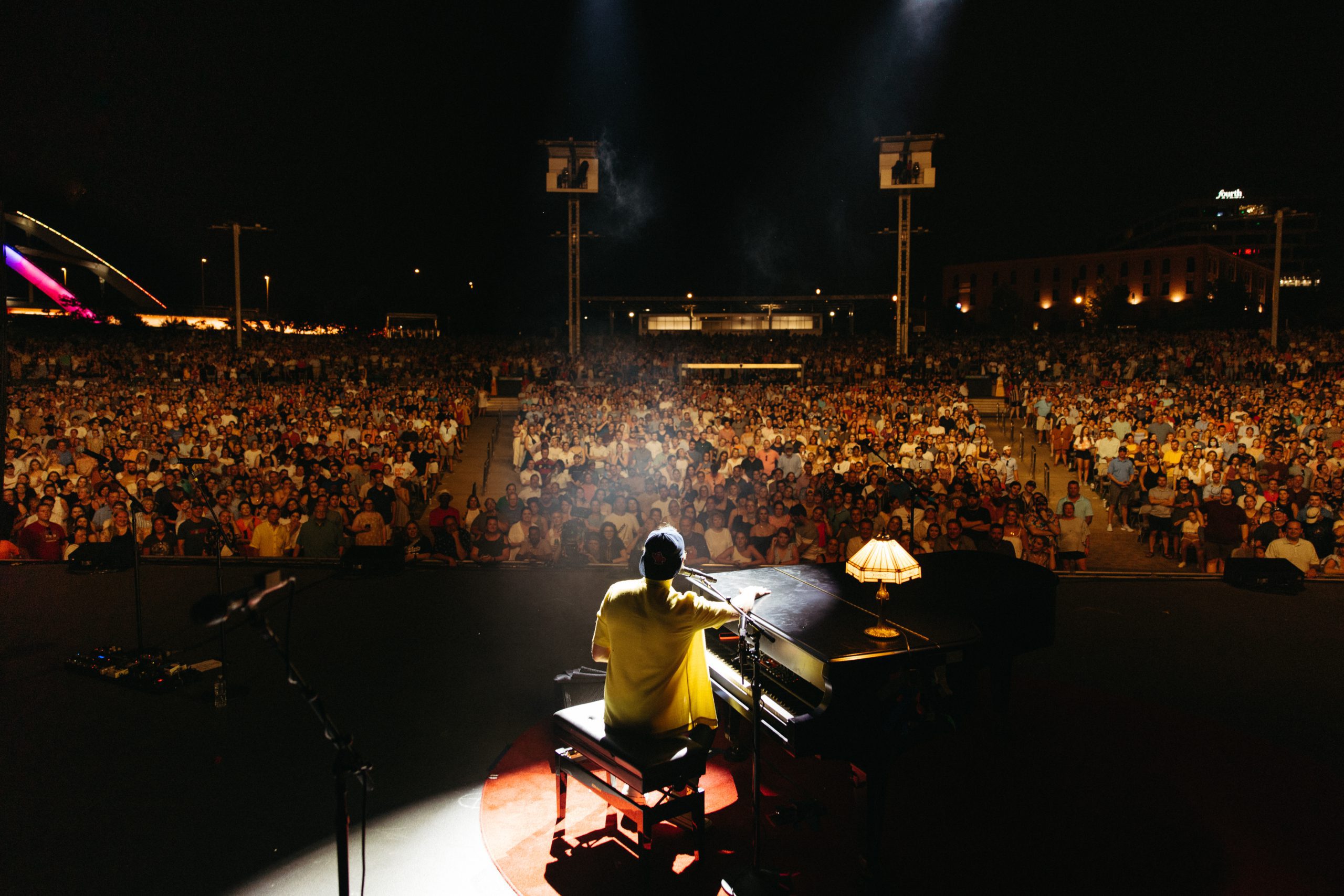 Indie singer-songwriter Ben Rector brought his headlining “The Joy of Music Tour” to Nashville’s Ascend Amphitheater on Saturday (June 25). Closing out the 21-stop trek with a hometown show for a sold-out crowd, Rector was preceded by JP Saxe and an interesting set of technical difficulties.

Taking the stage a little later than anticipated, the 15-song set kicked off in an usual fashion as Joy, the namesake and main character of Rector’s most recent record, came out solo and took their place at the piano. Beginning with the inspiring, fantasy-filled ballad “Dream On,” Rector walked onto the stage, taking a seat on the piano to serenade the audience and set the mood for the evening.

“Nashville, let’s have a wonderful night,” Rector said simply before exploding into a medley of “Old Friends”—arguably one of his biggest fan-favorites—and a chorus cover of “Forever Young” by Alphaville.

After addressing the issues with lighting and giving a shoutout to his adaptable production team, Rector quickly got the audience into the fun as he split the sea of spectators in half, giving each a special part to sing during a standout performance of “Living My Best Life,” which combined to form a chilling, harmonious moment. 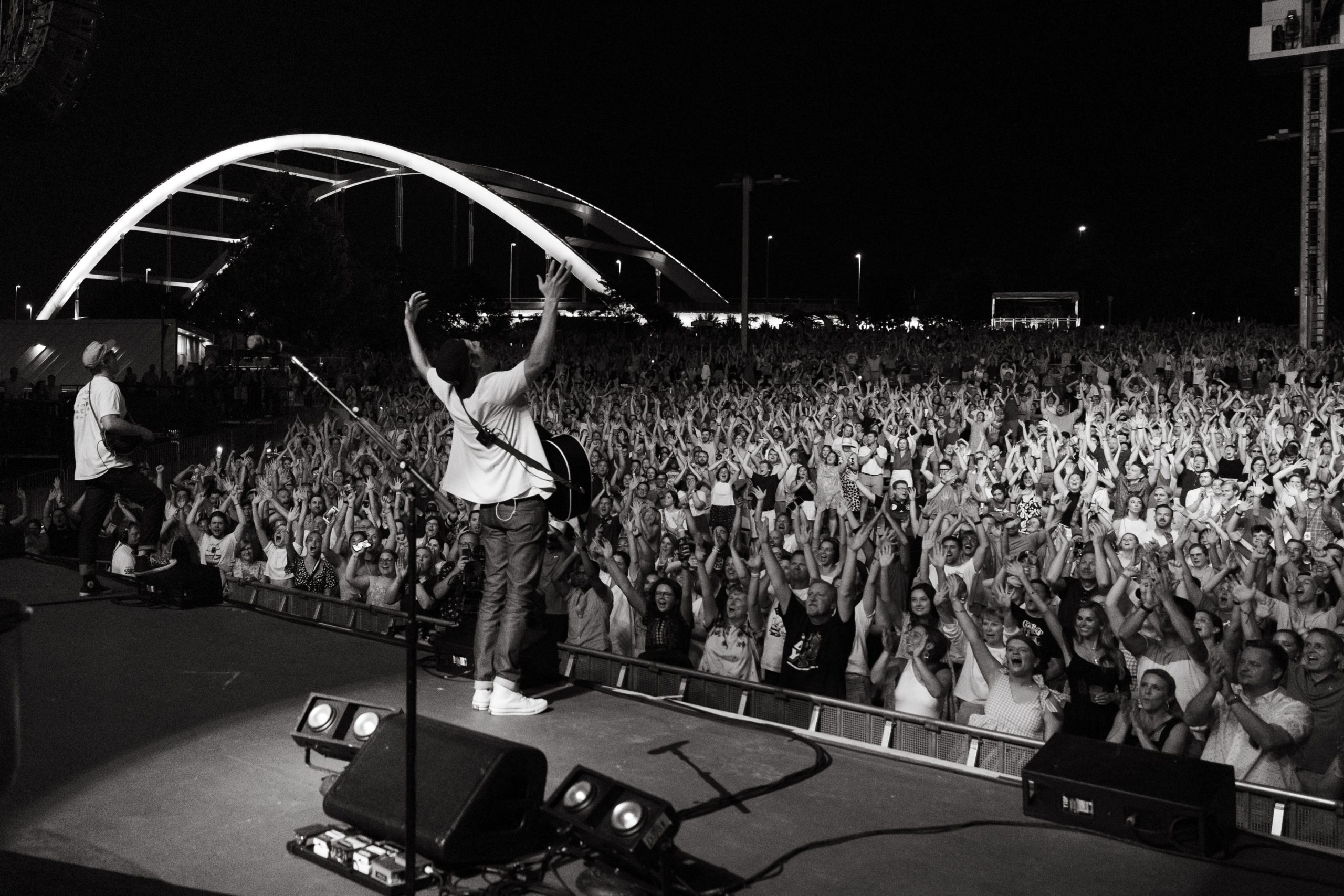 Ripping off into his hits such as “30,000 Feet,” which the audience eagerly screamed back, and new tunes like “Heroes” and “Daughter,” Rector had his ever-loyal legion of fans bobbing and swaying along to every song. Throughout the night, he also often shared the spotlight with his 8-piece band, making sure to give each of them their own moments to shine as well as trading off singing the lead with his deeply talented background vocalists Jordy Searcy and Stephen Day.

“This is a new record and a new touring cycle, but I wanted to make sure that I played some old songs too,” Rector explained. “The deal with old songs is you want to do them the way that the audience wants to hear them but also make it a little different than the last time you saw me. I decided that I would do something that I have never done before which is play [“Forever Like That”] exactly how I wrote it. I’m going to take you back to me writing it.”

Painting a picturesque scene reminiscent of Yellowstone, Rector delivered a western-infused version of the tune, complete with delectable three-part harmonies and cowboy hats all around.

The beloved singer-songwriter also shared lighter moments throughout the night, busting out into something reminiscent of a barbershop trio, fit with matching hats and light choreo for a rendition of his playful “Range Rover.” He also had the crowd drowning in his charisma as he sang his thoughtful “The Men That Drive Me Places” from his 2015 Brand New album, with Joy joining to tickle the ivories once again.

For the last section of the set, Rector laid on the tempo, spurring the entire crowd to dance along to songs like the groovy, saxophone-heavy “Supernatural,” pitch perfect “Steady Love,” and the rocking fan-favorite “White Dress” off 2010’s Into the Morning, which earned a roaring round of applause.

“Nashville, thank you so much for coming. I remember playing at 12th & Porter and 3rd & Lindsley and never thought that there would be 6,500 to 7,000 of you here tonight. It is insane,” Rector recalled before teasing the well-known concert encore etiquette. “Thanks so much for coming. Thanks for baring through some interesting technical difficulties, and it pains me to say that these are our last two songs,” he said with a wink.

Joy made their way back onto the stage for their namesake track, showing off an impressive collection of dance moves that the audience happily joined them in as the feel-good tune took over the amphitheater. Rector wrapped up the final song of the normal set as he took to the audience for the buzzy “Sunday,” running from the front row all the way to the back lawn two times over.

Though the lights went dark for only a moment, Rector re-emerged as promised.

“What a surprise,” he said cheekily. “Thanks so much for coming. You’ve been wonderful. I love this city and I’m so happy to be from here… This is our last song… Let’s do this.”

Rector ended the night with his Gold-certified hit single “Brand New,” every word of which the crowd happily roared back.