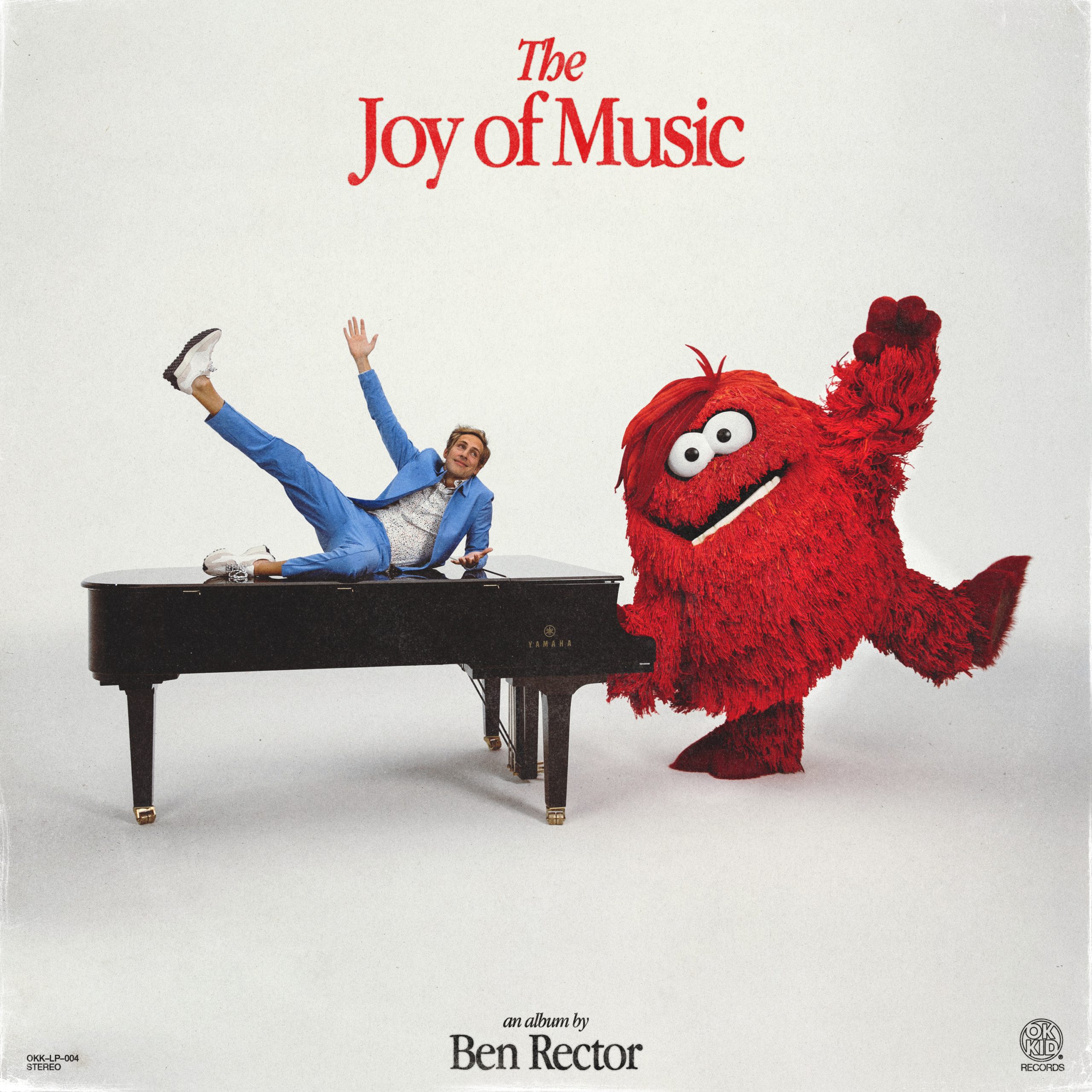 Independent singer-songwriter Ben Rector is no stranger to the spotlight. Since releasing his first full-length record, Twenty Tomorrow in 2007, the Nashville-based artist has amassed over one billion streams, reached the peak of Billboard‘s Americana/Folk Albums chart, earned top 10 distinctions on the Billboard 200, and built a fierce following of dedicated fans.

Within the indie-pop landscape, Rector has released an impressive collection of material, including eight studio albums, two live albums and a handful of hit songs, such as the Gold-certified “Brand New” and “When A Heart Breaks,” as well as “30,000 Feet,” “Love Like This,” “Old Friends,” and more across his extensive discography.

Rector recently released his eighth studio album, The Joy Of Music. The 13-track project, which was born amidst the chaos of COVID-19, displays a new, vibrant shade of Rector’s creative process and finds the multi-instrumentalist as a producer and writer on every track. However, The Joy Of Music‘s creative journey was not a linear one. 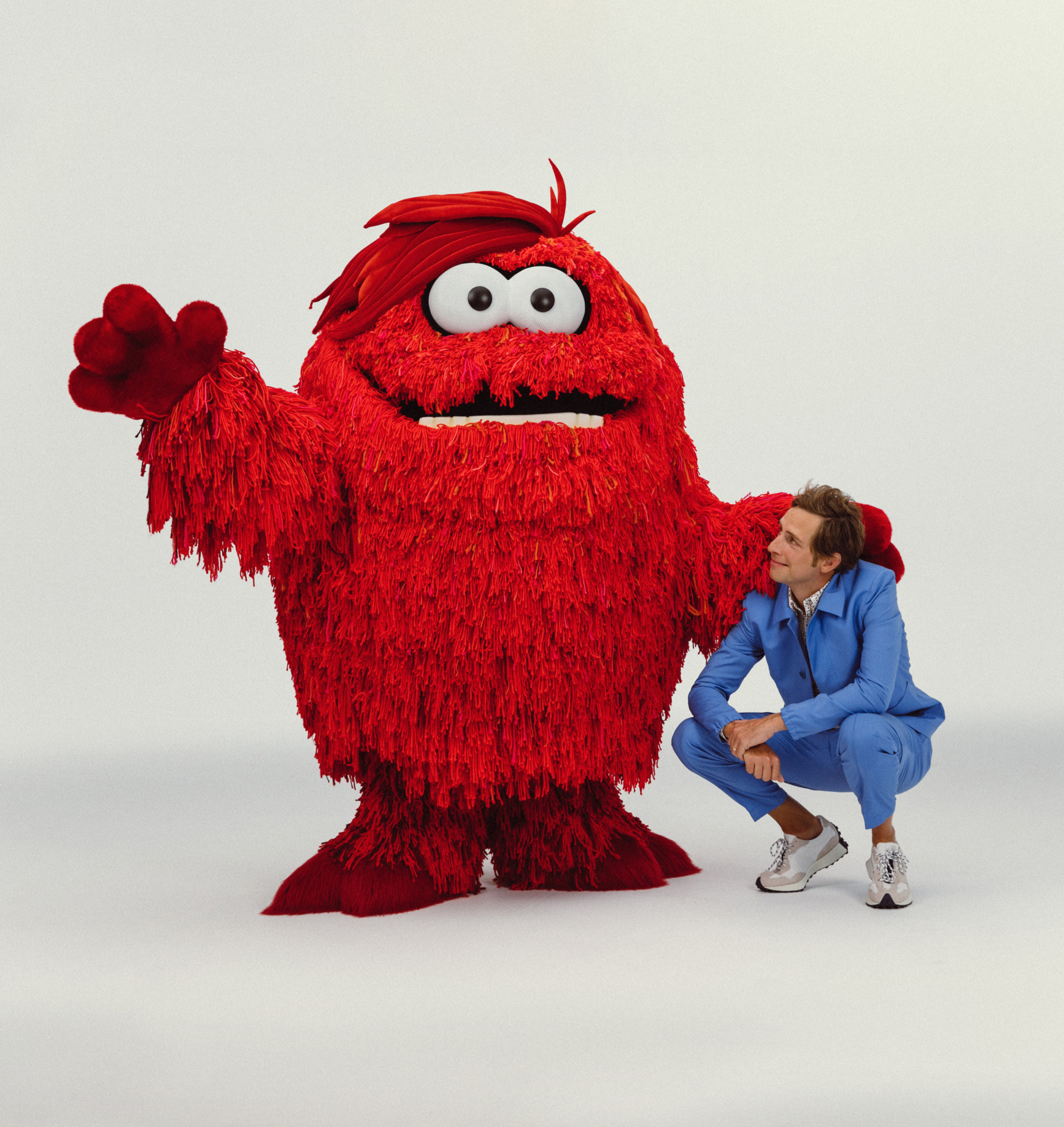 “Right before the pandemic, I went to LA and recorded most of a record. My idea was to get my dream band in my dream studio and do something that college me would have been really excited about. That was probably in January of 2020,” Rector tells MusicRow. “The pandemic started and everything shut down. After a couple months, I started essentially rewriting the whole record. I didn’t set out to do that, I just started writing because that’s what I wanted to do. I realized that I was kind of feeling like a kid again and falling back in love with the craft of songwriting and recording.

“Before I knew it I had a whole new batch of songs,” he continues. “There were two songs that I recorded in LA that still ended up on the record, but the other 11 were all written after the pandemic started. For the first time, I was just able to fully focus on that creative process. I wasn’t playing any shows and didn’t have a deadline to wrap things up. I was able to chase whatever I wanted, and I started realizing that the music that I was making from that place felt a lot more special.”

Throughout the baker’s dozen of songs, listeners are taken through a wide swath of emotions. From the upbeat and dance-provoking “We Will Never Be This Young Again;” the inspiring, fantasy-filled ballad “Dream On;” “Living My Best Life,” which drips in positivity; the cathartic coming-to-terms with adulthood in “Heroes;” and gratitude anthem “Thank You,” The Joy Of Music serves as a soundboard for many aspects of the human experience.

However, Rector’s hope for the record isn’t to teach, instruct, or evoke some series of emotions. Rather, his focus for The Joy Of Music is simply to bring just that to people: joy.

“This is an odd analogy, but there’s this place in LA called The Honor Bar and they have this chicken sandwich that is the best sandwich I’ve ever had. Every time I eat it, I’m just like, ‘What a treat that was. I was entertained just by how good it was and it made my day better.’ I think my hope is that my music will feel like that chicken sandwich to people—like a little treat that made them feel good and made their day a little bit brighter,” Rector says with a smile. “I wasn’t necessarily aiming to make people feel thankful for their lives. I would love that, but at the end of the day, anything that people find really enjoyable—whatever that is for you—I just hope my music can be like a small version of that in people’s lives.”

Joining Rector throughout the project is a diverse group of collaborators, ranging from Snoop Dogg lending his vocals on the R&B-infused “Sunday,” to Kenny G and Dave Koz contributing their seasoned saxophone skills on “Hanging Out” and “Supernatural,” as well as Taylor Goldsmith from Dawes adding his own touch to “Cliches.”

“When I was making this record, I was operating from a place of wanting to find joy in the process. I wanted to do things that sounded fun, just because they sounded fun,” Rector explains. “I wasn’t constructing songs with the hope of them being a feature or anything. I was just making the art that I wanted to make and then on a couple of songs, I said, ‘Dude, it would be so fun if we got Snoop Dogg to be on the song.’ For me, the worst thing that can happen is that Snoop says, ‘No, I don’t want to do that,’ which is totally understandable. The best thing that could happen is that I’m on a song with Snoop Dogg.”

He continues: “I didn’t want to play it safe anymore. I didn’t want to show the same tricks that I’ve done before a bunch of times just because I know I won’t fail. I don’t want to be afraid of failing anymore because this is my one wild and precious life. I don’t want to look up when I’m 60 and be like, ‘Man, I was so scared the whole time that I was gonna look silly, or that it wasn’t gonna go very well.’ I just want to do cool stuff that’s fun for me and fun for other people.”

Along with the record, Rector also released an accompanying short film that features seven of the album’s songs brought to life visually. The film sees Rector being led through a journey of overcoming his deep-seated fear of failure and rediscovering the joy of music by his new friend Joy, a muppet monster that he created with Jim Henson‘s Creature Shop. 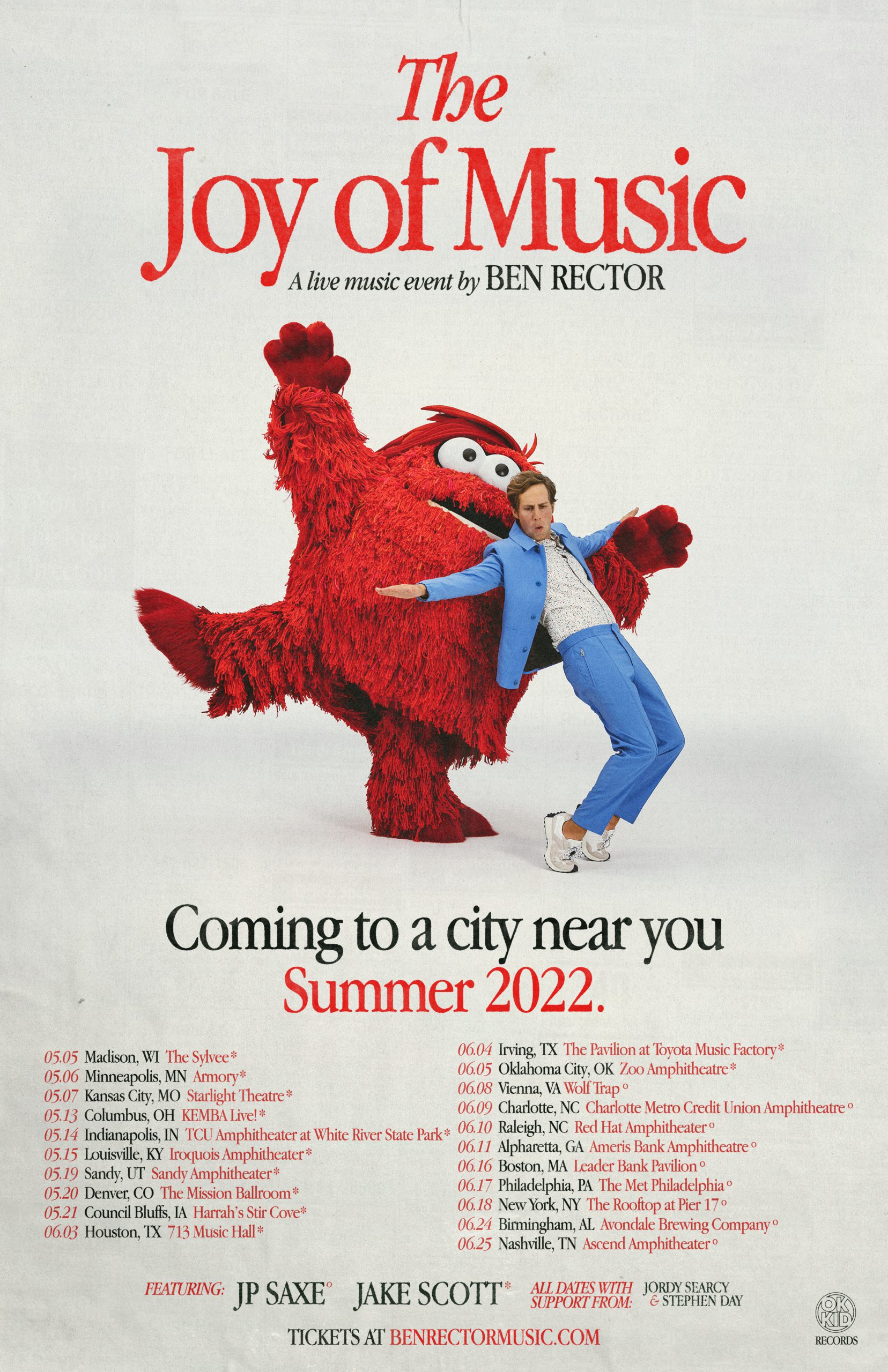 “I don’t remember when I thought about the character Joy, but I do remember thinking that I’ve never seen anybody do that. Sports teams have mascots, but I’ve never really seen that done in music and it just sounded fun to me,” Rector offers. “Honestly, sometimes it’s nice for me to have something that takes a little bit of the attention off of me when I do a show, too. It gets a little weighty to have everyone looking at me for 90 minutes. It sounded fun to be able to have Joy do stuff.”

Rector will make his return to the road this summer on “The Joy Of Music – A Live Music Event” with special guests JP Saxe and Jake Scott, beginning with a show at The Sylvee in Madison, Wisconsin on May 5. Jumping from city to city across the country, the beloved entertainer will make stops in Minneapolis, Kansas City, Denver, Houston, Charlotte, Indianapolis, Boston, Philadelphia, New York, and more on the mostly-amphitheater dates.

“Instead of having specific numerical goals, like selling this many tickets or making this much money, my real hope is that I enjoy the process of this record cycle and the tour. I’ve never really approached it like that before, and I realized that’s honestly probably the only thing that I can control. I can’t really control how many people come to a show, if I win an award, or chart positions. I’m going to do everything I can to give the record and tour the best shot to do well, but when I live mainly in that place of putting my self worth in things I can’t control, I don’t end up that happy about it.”

He sums, “This time I want to focus on enjoying it because that’s probably where the best work is going to come from. So far, the best songs and the best recordings have come from that, so I’m just going to try to carry that through the tour.”

Rector’s “The Joy Of Music – A Live Music Event” will wrap up with a special show at Nashville’s Ascend Amphitheater on June 25.