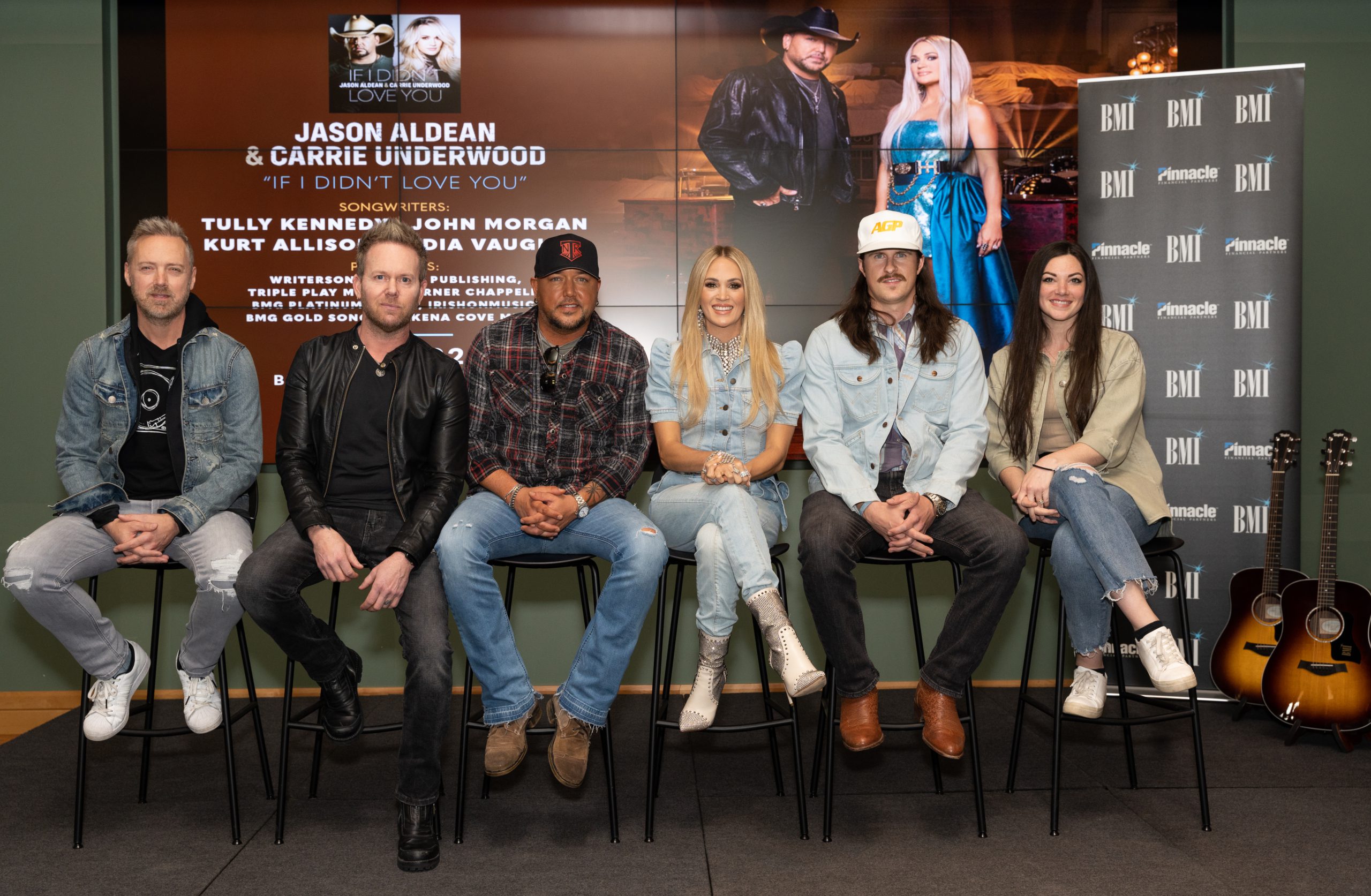 Music City songwriters, publishers and other music business professionals gathered in the BMI lobby on Thursday (April 7) to celebrate the award-winning and chart-topping duet, “If I Didn’t Love You.”

Sung by country hitmakers Jason Aldean and Carrie Underwood, the track is Aldean’s 26th career No. 1 and Underwood’s 28th. “If I Didn’t Love You” was written by Kurt Allison, Tully Kennedy and first-time chart-toppers John Morgan and Lydia Vaughan.

BMI’s Clay Bradley hosted the celebration. Bradley recognized the magnitude of two country superstars joining forces for the hit duet. “[They are] taking their place in the country music history books as one of the greatest duets of all time, alongside Tammy and George, Conway and Loretta, Tim and Faith, Dolly and Kenny, and Johnny and June,” he said. “‘If I Didn’t Love You’ will live on forever.”

Cornman Music’s Nate Lowery was on hand to speak about Vaughan. He spoke about her skill, spirit and work ethic—as well as her love for snacks at the publishing office. “When you first hang out with her, you realize how special she is,” he said. “She’s talented, smart, and humble.”

BMG’s Chris Oglesby got up to speak on Allison and Kennedy, the best friends, co-writers, and bandmates in Aldean’s band. “Kurt and Tully,” Oglesby addressed the songwriters, adding that calling them “Tully and Kurt” wasn’t the correct order. “It’s been an honor to be a small part of your success since BMG came alongside to become a partner and watch you guys work. Your ability to balance road work, producing, writing, and family is exemplary.” 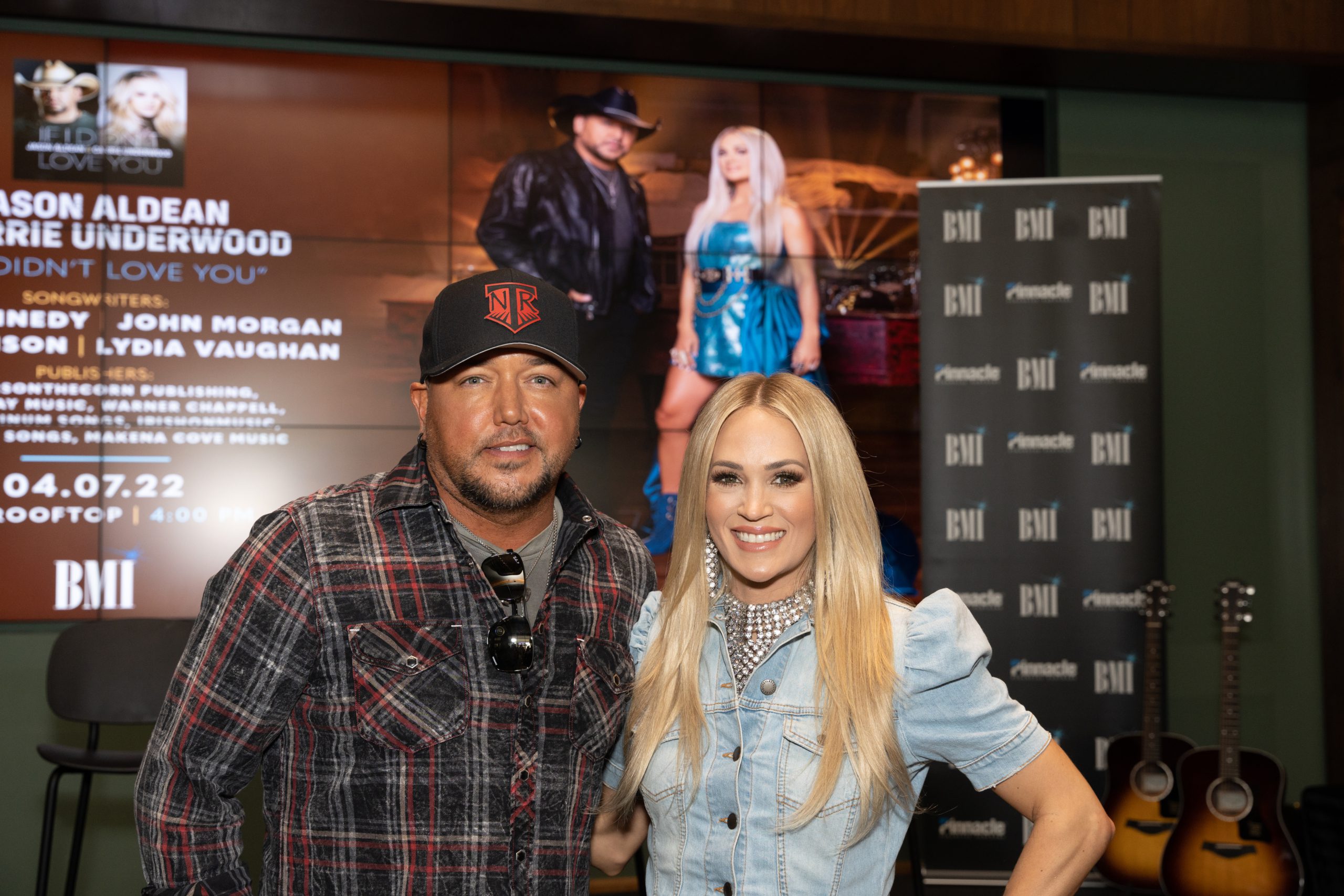 “This publishing thing is pretty easy, I’m like two for two,” Aldean joked. “One of the main reasons Kurt, Tully and I decided to start Triple Play was meeting John Morgan.

“From the time I heard his voice and the stuff he was writing, I knew I wanted to create something for [Kurt and Tully] and for him,” he said. “This being his first cut, first single, and first No. 1…You’ve only got one way to go from here, my man.”

BBR head Job Loba recognized Aldean’s partners at Maverick, WME, and Green Room PR, as well as BBR’s entire label staff, making sure to call out many unsung departments in addition to his stellar radio promo team. He let the crowd know that Broken Bow Records was the No. 3 most played imprint in 2021. “You guys crushed it last year, you’re already crushing it this year,” he said.

“Jason and Carrie,” Loba continued. “There is a reason you two are the icons you are. There’s many reasons, but at the base, it’s your uncompromising attention to great songs.” 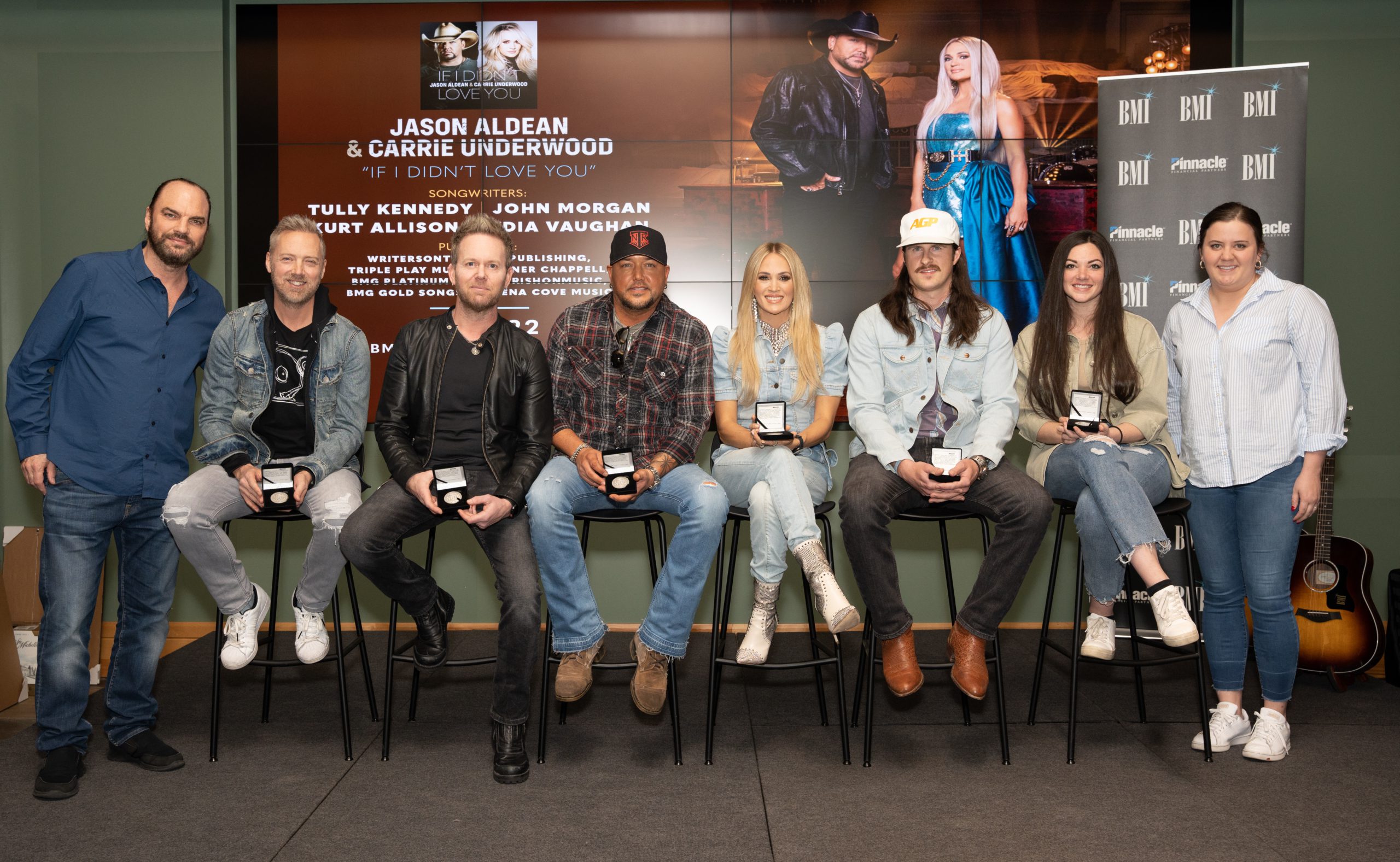 Next up to speak were the “If I Didn’t Love You” co-writers. Allison kicked things off, thanking Aldean and Underwood, his co-writers, team-members and family.

“I don’t ever want to lose sight of the thankfulness and the gratefulness that I have. I play guitar for a living, I get paid to do that. I go around with my best friends. It’s absurd,” Allison said. “I write songs with some of my best friends—and they’re going to be my best friends for life. Music brought all of us together and made us friends, but now we’re friends that get to make music together.”

Kennedy echoed Allison’s thanks. “I look around the room, and we are so blessed to have been surrounded by the same faces for our entire career. This is a family.”

Vaughan spoke about the gravity of a Aldean-Underwood cut being her first hit. “Jason and Carrie, thank you guys so much for hearing the song, believing in it, and putting your voices on it. You guys have given the song its absolute best life,” she said. “12-year-old Lydia is 100% freaking out knowing that Carrie Underwood and Jason Aldean recorded a song she was a part of.”

Morgan concluded the writers’ speeches, specifically thanking Aldean for believing and investing in him. “Being a songwriter is a tough gig, there’s a lot of instability that comes with the industry. I’m so thankful I got in with the people I did when I did.”

Next, industry members got to hear from the hitmakers themselves, Aldean and Underwood.

Aldean told the story of the song’s journey from him hearing it to Underwood recording with him. He thanked Underwood, all of his team members and the writers. “Thank you so much to everyone who worked on the song, believed in it, and made it what it is. Like Clay said, I do think this will go down as one of the biggest duets in country music,” he said. “I’m really proud to be a part of it.”

Underwood recounted her experience hearing the song for the first time—noting that seeing a female as a writer on the track intrigued her and led to more opportunities for Vaughan.

“In this case, the old cliche ‘it all starts with a song’ is exactly how it happened,” she said. “The stars lined up so quickly to make this happen, it was all meant to be. Thanks to everyone who helped give this song the light it deserves, it’s been really fun to be part of it.”

BMI’s partner in No. 1 parties, Pinnacle Bank, made a donation on behalf of the song to St. Jude Children’s Hospital in honor of Aldean, and to Underwood’s C.A.T.S. Foundation.