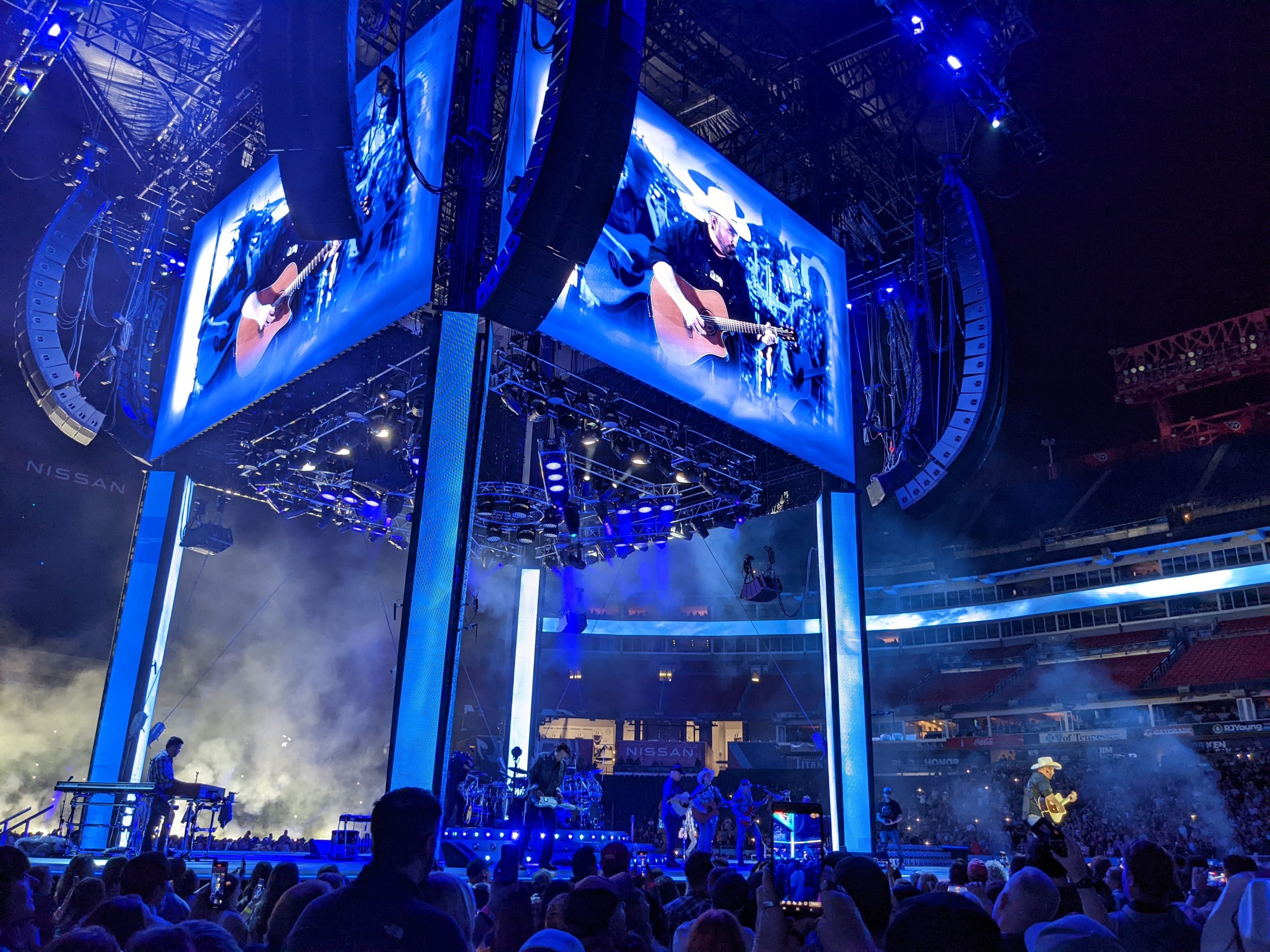 Garth Brooks returned to Nashville this weekend after his original July 31 stop at Nissan Stadium was postponed due to bad weather and then later, cancelled due to the rise of Covid-19 cases at that time.

His return to Nashville included two shows, packing the stadium each night, on Friday (4/15) and Saturday (4/16) with the Friday night show only being announced three weeks ago.

On Friday night, Brooks was quick to confess he was taking this show “off the rails” with an unplanned and unscripted show. And in a way that only Brooks can do, he was able to immediately connect with fans on a one-on-one and personal level despite performing a stadium show.

Early into Friday’s performance, Brooks talked directly to people in the audience who were holding up signs and messages for the iconic singer. He added, “This is like request night. I like this!”

In March 2019, he launched The Stadium Tour, which has consistently broken stadium attendance records. Brooks confessed that the night was about being grateful and shared that the 2-night visit to Music City was bringing a record 71,000 fans together that weekend. 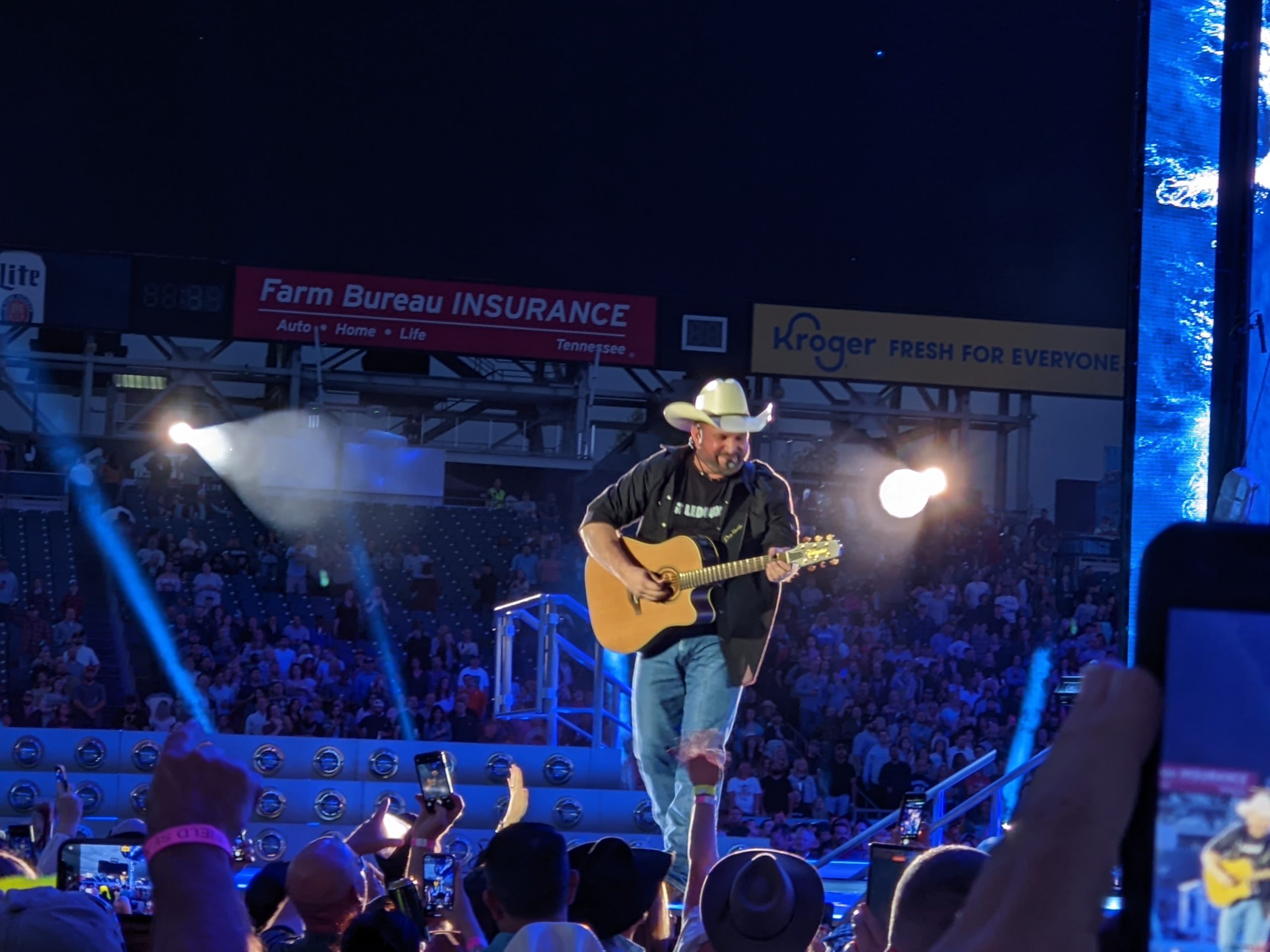 “We’re going to treat this less like a concert and more like a party,” proclaimed Brooks and the fans were there for it.

Among his many hits played during his two-hour set, he performed many fan-favorites including Nitty Gritty Dirt Band’s “Fishin’ in the Dark,” Bob Dylan’s “Make You Feel My Love,” “If Tomorrow Never Comes,” “The Thunder Rolls,” “Rodeo,” “The River,” and many others.

An emotionally charged Brooks professed, “This will be a night I never forget,” before performing his Billy Joel penned tune, “Shameless.” The thunderous ovation led him to praise the Friday night crowd by instructing them to tell anyone they knew that was coming to the next day’s show, “They better pack their fucking lunch if they’re going to beat this crowd here!”

That fueled the exuberant fans to an even higher escalation confirming Brooks wasn’t lying. 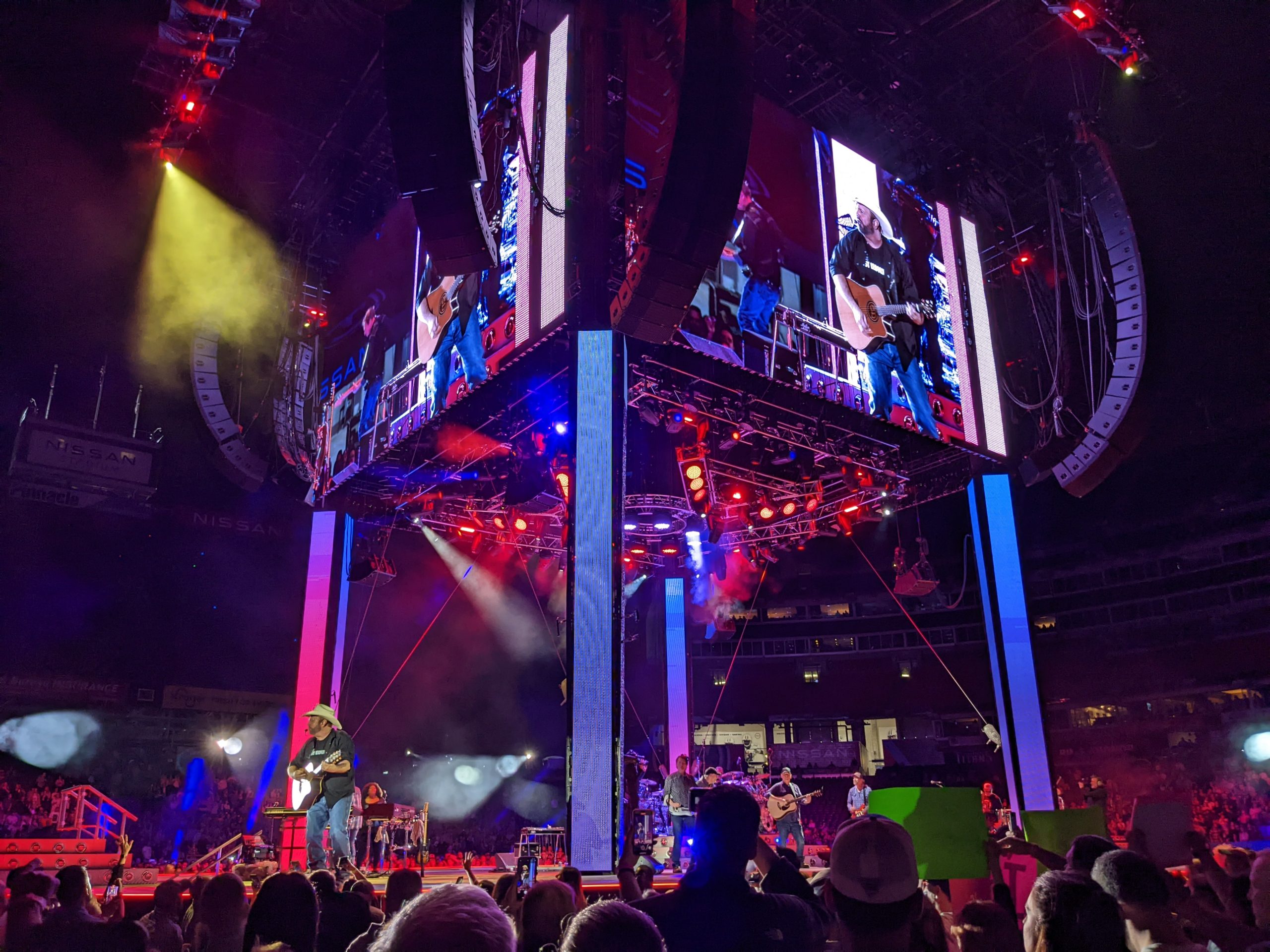 Earlier this month, Brooks announced he will open a new entertainment concept and bar in Nashville at 411 Broadway and will take over a 3-story, 40,000+ square foot property that he purchased in December of last year. He gave a subtle nod to that announcement on Friday by introducing his 1990 hit, “Friends in Low Places,” saying, “Let’s see if we can play a song that may be the name of a bar.”

He played his proclaimed favorite song “The Dance,” written by Tony Arata, which is from his self-titled debut album, before offering an acoustic encore with just him and a guitar. During the encore, he sought out fans holding signs asking him to play particular songs and spoke directly to them before performing it.

He then made reference to a very young kid holding up a sign that read, “Shallow.”

After singing the first verse of the song, originally performed by Lady Gaga and Bradley Cooper from the movie A Star Is Born, the full band returned to the stage, and so did his wife and country music artist Trisha Yearwood to join him on the duet. The enthusiastic crowd convinced her to stay for another song and she did, with a flawless performance of “Walkaway Joe.”

For the last song of the evening, the country superstar performed “Standing Outside The Fire,” which perhaps embodies the inspiration we all needed to hear that night after having come through the storms of a pandemic… life is not tried, it is merely survived, if you’re standing outside the fire. 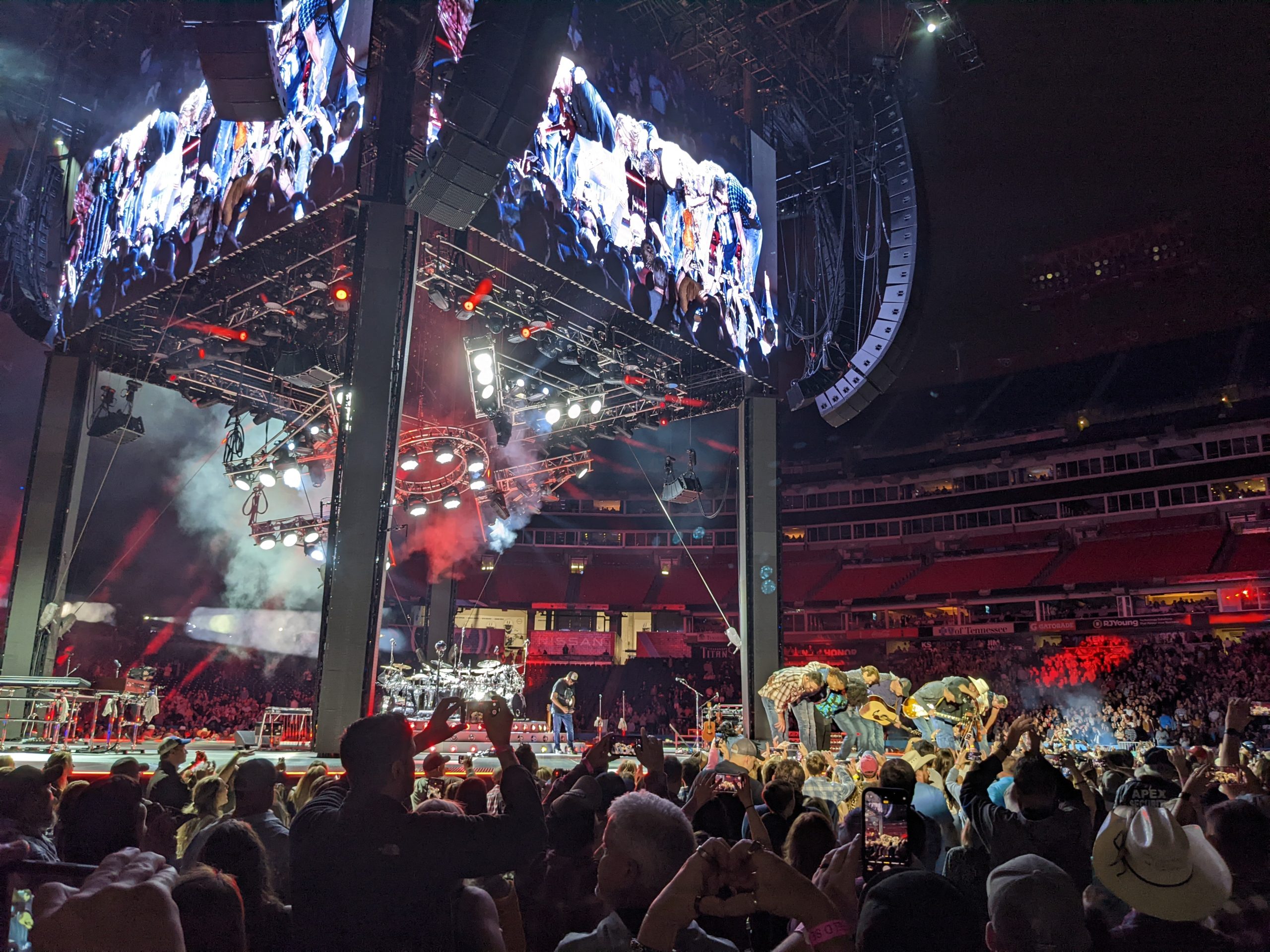 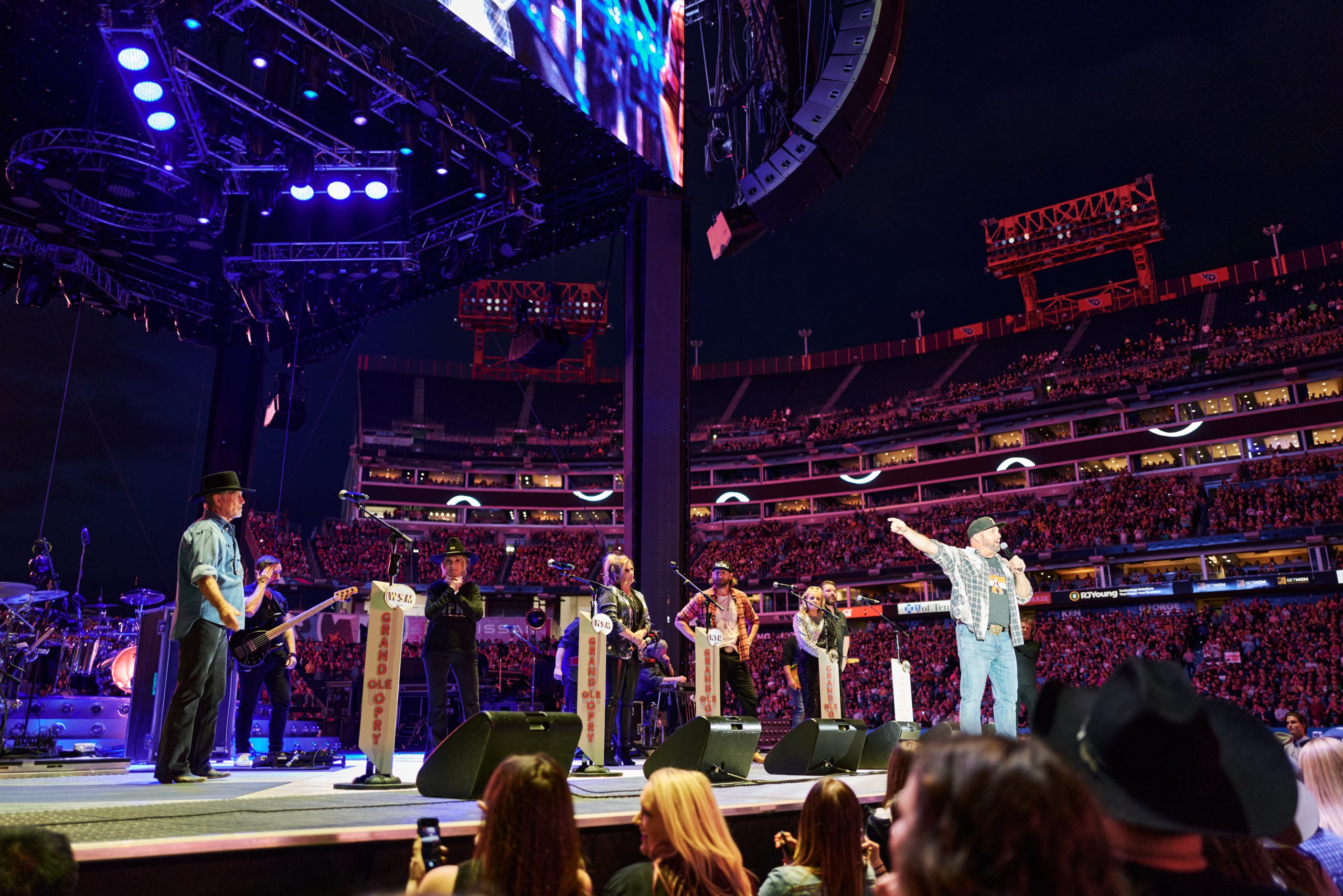 Young opened the show with his hit “Gettin’ You Home” before stepping into a host role and welcoming Rice to the stage for two songs. Yearwood performed her smash debut single “She’s in Love with The Boy” and was joined by Alaina, who she officially inducted into the Opry in February.

Young and Brooks collaborated on Brooks’ smash “Papa Loved Mama” before everyone including, Gatlin and Seely, gathered on stage to sing the Opry anthem “Will The Circle Be Unbroken.”

As the performers took the stage at Nissan Stadium, the Grand Ole Opry simultaneously took place at the Opry House and was heard around the world on WSM Radio and online with performances by Opry members John Conlee, Carrie Underwood, Sam Williams, and more.