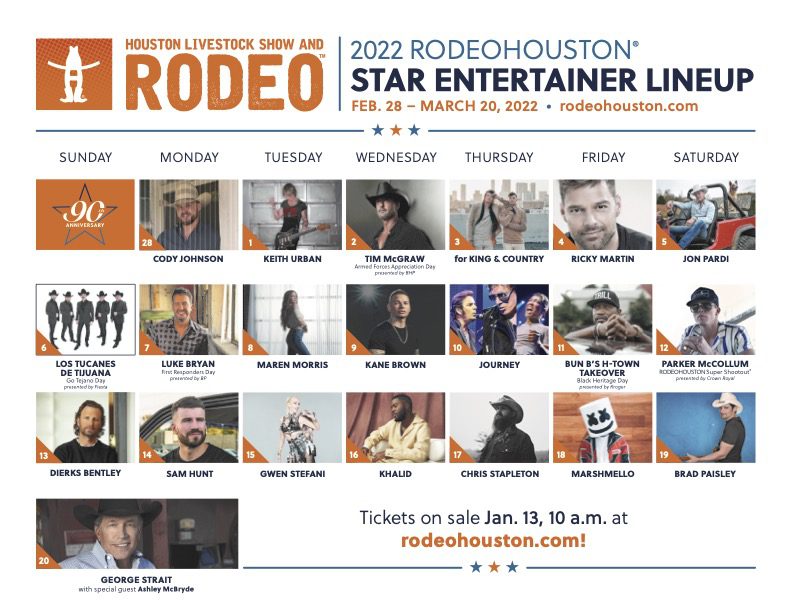 The Houston Livestock Show and Rodeo has unveiled the entertainment lineup for the 2022 Rodeo season, running from Feb. 28-March 20.

George Strait, Tim McGraw, Keith Urban, Maren Morris, Kane Brown, Luke Bryan, Chris Stapleton, and many more are among the star-studded list of performers on this year’s bill. Nearly half of the artists will make their RodeoHouston debut in 2022, as the event celebrates its 90th anniversary with a mix of genres including country, EDM, Latin pop, R&B, Norteño, pop, rock and Christian.

“We are excited about the level of talent and diverse acts who will perform on the RodeoHouston star stage in 2022,” says Chris Boleman, Rodeo president and CEO. “We welcome nine new entertainers who will make their RodeoHouston debut, as well as many fan-favorites, including the ‘King of Country’ music himself, George Strait, who will return to the stage to help celebrate our 90th anniversary.”

Individual RodeoHouston tickets will go on sale to the public on Thursday, Jan. 13 at 10 a.m. at rodeohouston.com.