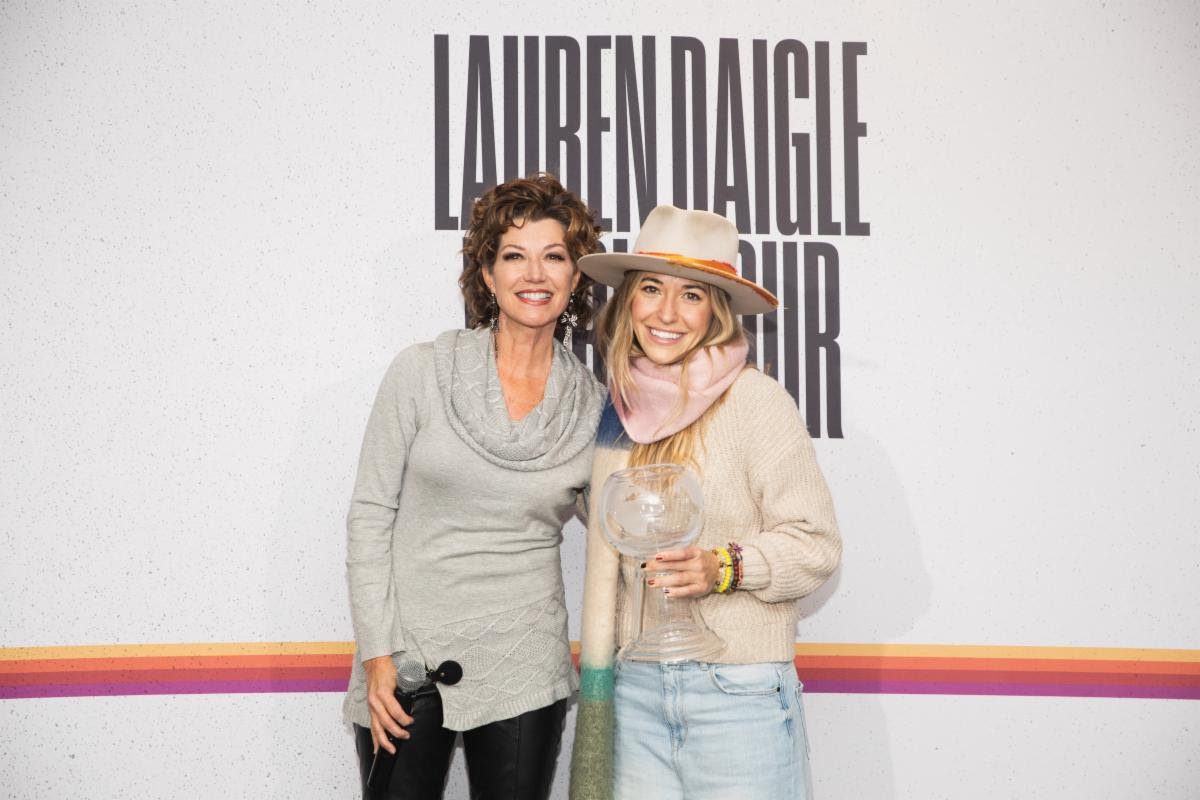 Prior to her sold-out performance at Nashville’s Bridgestone Arena on Nov. 19, two-time Grammy award-winning singer-songwriter Lauren Daigle was recognized for the impact that both her music and philanthropy has had on millions of people worldwide. The Global Impact Honor, presented by Amy Grant, distinguished Daigle as a genre trailblazer and ambassador.

Worldwide, Daigle has sold over one million concert tickets on three continents, including 170 sold out headline performances, and has donated over $2,000,000 to 25+ organizations from those sales alone. Her music has been streamed over 5 billion times and she has performed on nearly every network morning, daytime, and late-night show, as well as multiple awards shows, and competition shows.

Daigle has spent 100 weeks at No. 1 with her Grammy award-winning album, Look Up Child, as well as 132 weeks at No. 1 with her 4x Platinum selling single “You Say.” She recently earned RIAA certifications for several songs from her first Platinum selling record, How Can It Be: the album’s title track and “First” have been certified Platinum, “Trust In You” is recognized as 2x Platinum, and “Come Alive (Dry Bones),” and “O’Lord” have been certified Gold & Platinum.

Grant said: “I’m so thrilled to be here tonight, and so proud of you. You have literally impacted millions of people around the world. This is the last night of the tour that has taken 20 months to wrap up and during that time you’ve shared your faith and you’ve done it tirelessly. So for using your platform to share your faith in such an open way and welcoming millions of people around the world, for the work you’ve done having children sponsored, and just using your gifts in such an amazing way I’m proud to give you this honor.” 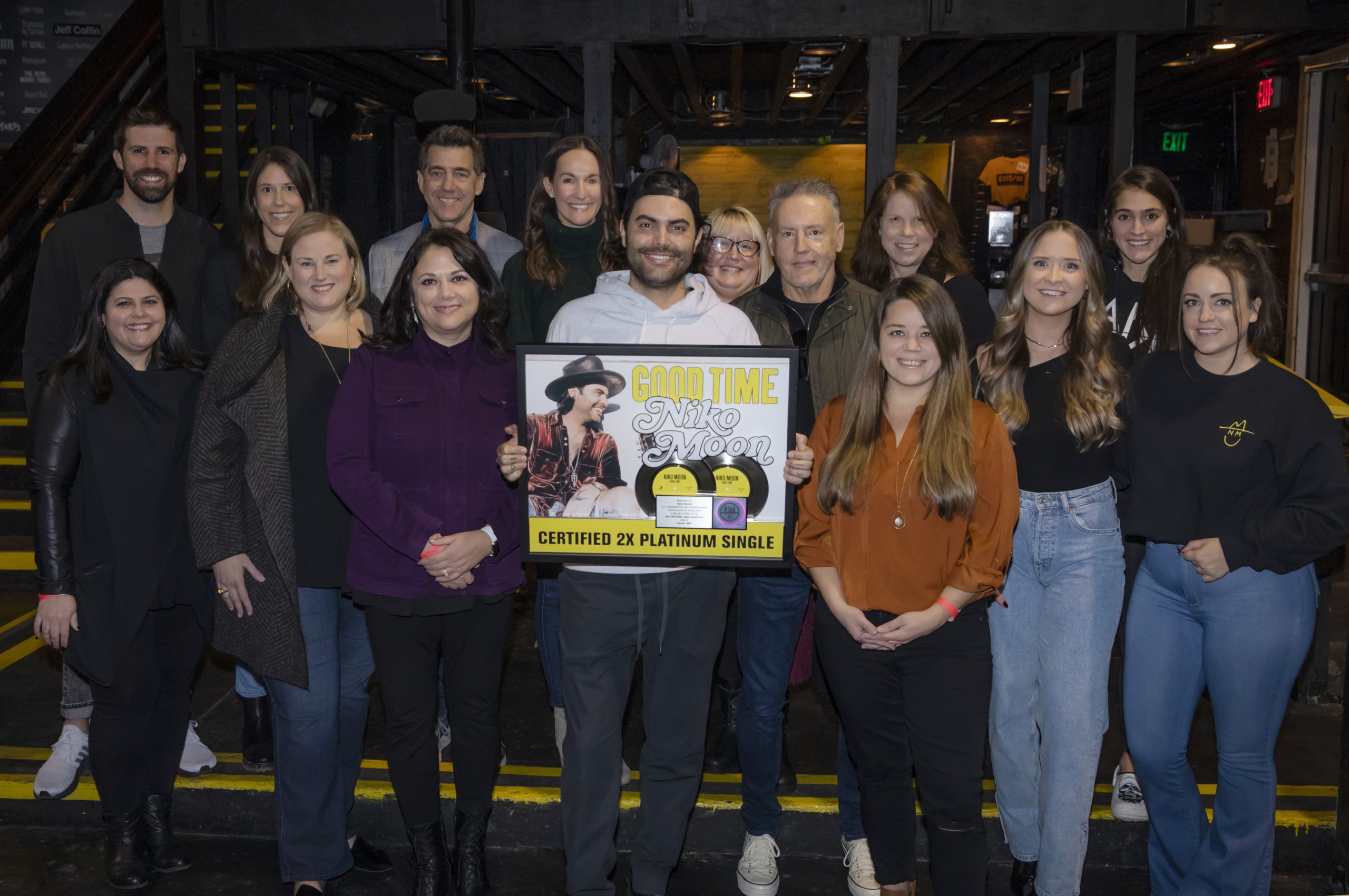 RCA Nashville’s Niko Moon has earned an RIAA double-Platinum certification for his No. 1 debut single “Good Time.” Commemorating U.S. sales of over two million, “Good Time” is the only debut single to impact country radio and achieve 2x Platinum status during the COVID-19 era after hitting airwaves March 13, 2020.

The track has earned more than 414 million streams globally and was the first debut single to simultaneously top the Billboard Country Airplay and Hot Country Songs charts since Sam Hunt’s “Leave The Night On” in 2014. Moon’s debut single was also nominated for “Breakthrough Video of the Year” at the 2021 CMT Music Awards.

Staff from Sony Music Nashville, Make Wake Artists, and RIAA surprised Moon with the news on Friday (Nov. 19) ahead of the sold-out kick-off of his “Good Time Tour.” Moon’s first headlining trek features support from Kylie Morgan and will continue this weekend in Kansas City and Columbia, Missouri.

Moon was named SEASC 2021 Songwriter of the Year. With seven No. 1 songwriting credits, Moon has co-penned five chart-toppers for Zac Brown Band, plus Dierks Bentley’s most recent No. 1 “Gone,” as well as cuts for Rascal Flatts, Ashley Monroe, and more.

The Country Music Hall of Fame and Museum has promoted Alaina Fouse to director of operations and sustainability, and Bret Pelizzari to creative design director.

As creative design director, Pelizzari oversees the museum’s design team. He previously served as senior graphic designer, creative design manager, and senior creative design manager. In the seven years Pelizzari has been with the museum, he has worked on a variety of exhibitions, book designs, educational and marketing initiatives, advertising campaigns, motion graphics and video productions. Before joining the museum, Pelizzari spent nine years as art director of The City Paper in Nashville and 20 years running his own design company with a wide array of clients.