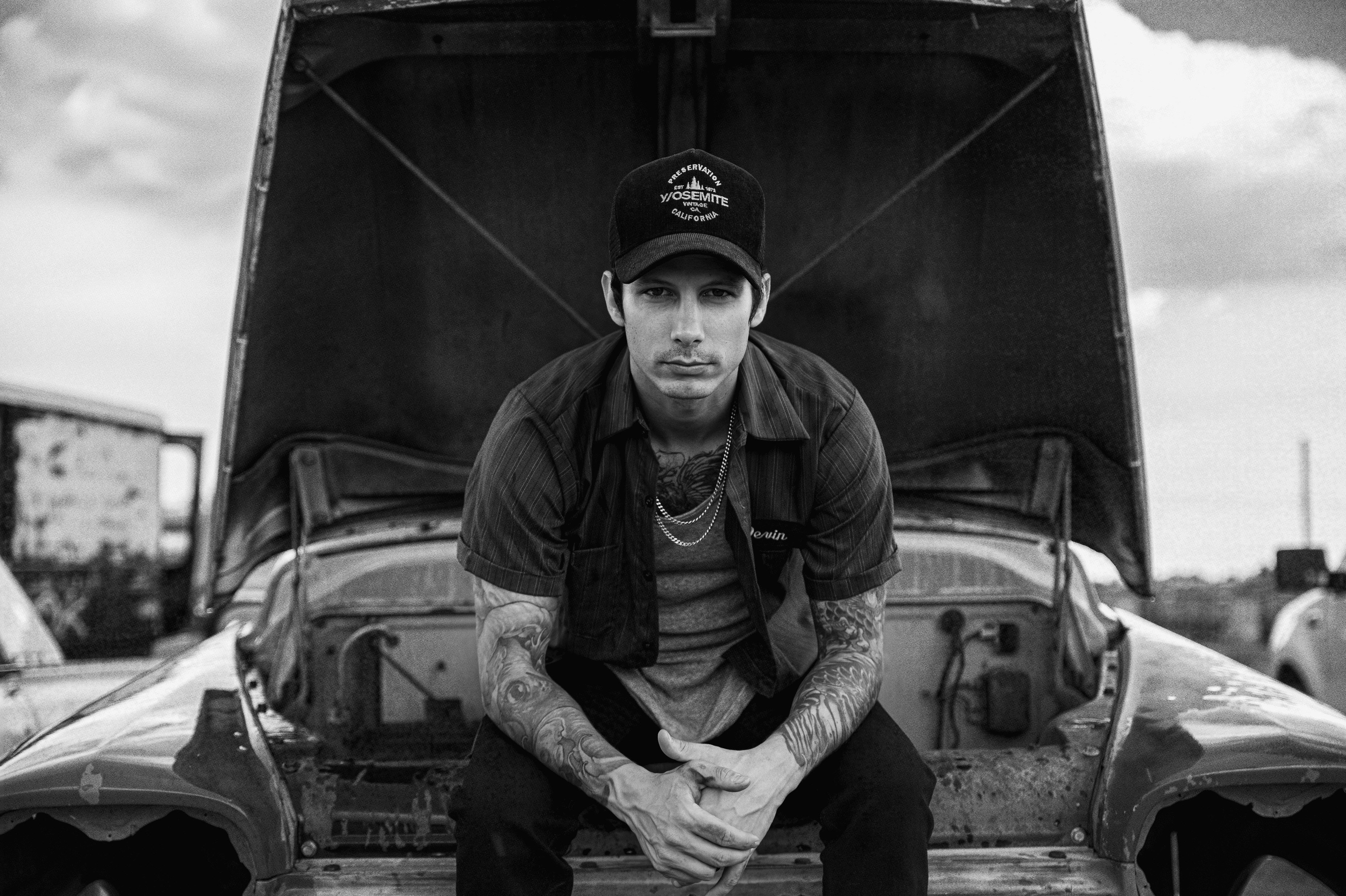 It’s been three years since Warner Music Nashville/Atlantic Records’ Devin Dawson released his moody and unique debut album, Dark Horse, which spawned his breakout hit “All on Me,” and other fan-favorites like “Asking For A Friend” and “Secondhand Hurt.”

But the ‘Dark Horse’ is back, and with The Pink Slip. Dawson released The Pink Slip EP on Jan. 15, comprised of six new, and noticeably lighter, songs.

In an interview with MusicRow, Dawson talked about the changes in him as a creative and as a person, that led him to make The Pink Slip.

MusicRow: The imaging for this is really different than Dark Horse. The music is more optimistic, and obviously the cover is pink. What do you think has changed in you since you’ve made Dark Horse?

I think my fans know to expect the unexpected from me. I always want to do something out of the box and unexpected. Posting a pink album cover was probably the last thing that anyone expected from me. But more so than that, not just to be flashy or unexpected, it’s more so about serving the music, serving the song and doing what’s right for these songs. Like you said, I have grown a lot since the man I was when I wrote Dark Horse. I keep saying this, but I have had a little success and I’ve seen the world, I’ve fallen in love and gotten married. So many great things have happened and I’m genuinely happy. 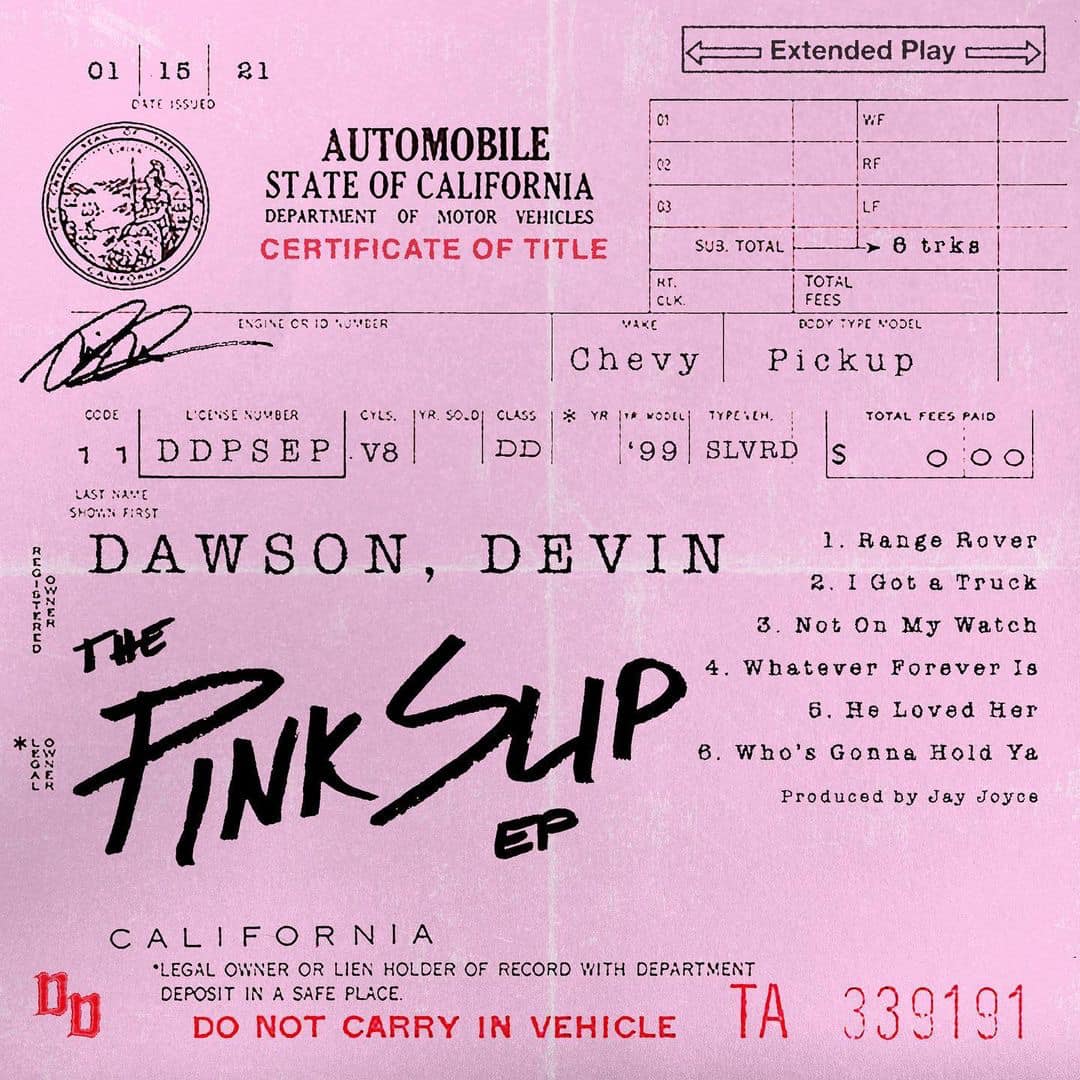 This EP is really just an example of me trying to make sense of that and still stay true to my songwriting. I’ll always be a ‘dark horse’ and I’ll always love to play the character of that vulnerable, visceral, introspective guy, but I think my job when I’m putting out an album is to just talk about what I’ve gone through in the last couple of years. And there’s been a lot of great shit that happened, so if this album seems a little bit hopeful and a little bit brighter, that’s why.

I imagine you’ve written more than six songs in the past three years. How did you put this selection together for the EP?

Honestly, it just happened by chance. These are the first ones that we went in to record and we had a plan to do a lot more. Obviously COVID changed that, and then it’s trying to figure out to pivot. I’ve worked with Jay Joyce since Dark Horse, just an absolutely incredible producer, but he’s been smoking for like 35 years and he has diabetes and all that. So it wasn’t necessarily something that we could just get into the studio like normal. As much as we would have loved to go back and tweak things and record more, maybe do a whole album and try to make things right or whatever, these are the first songs that we recorded and, to me, the priority was just to put out music. It had been so long and I’d be damned if I was going to let a quarantine that’s going to last however long, stop me from putting out new music.

You wrote with Ben Rector on “Range Rover.” Had you worked with him before?

“Range Rover” was like maybe the third or fourth song that we wrote. I’ve been a huge fan of him since college, when I first discovered him. I had seen some things he’s done recently and just really connected with it. I’ve had a couple accolades and some things happen publishing-, songwriting-, and artist-wise where I actually had a chance to be like, ‘I want to write with him.’ So I chased him down a little bit and was like, ‘Dude, I really think that we’d do something cool together.’ We both have the same things that make us happy when it comes to songwriting. We want to do something that’s never been done before and never been heard before, but do it in a way that everyone can relate to. That’s really hard, to reinvent the wheel every day, but I think when you get aligned with certain people, to go there and to write those songs, you need to be completely open and ready to fall on your face if it’s not good. So we got in a room and we started writing. We just hit it off.

The idea [for “Range Rover”] came out of conversation in the room when we were starting up. One of my other co-writers on that song, Mark Trussell was talking about him having a Top 20 finally and being able to get paid. He was like, ‘I have to get my wife a car.’ I said, ‘What does she want?’ He said, ‘I think she wants a Range Rover.’ She’s not the stereotypical, trophy wife kind of a girl looking for the Range Rover. She’s a very sweet, wholesome, amazing woman—not that every single person that drives a Range Rover is like that, but there’s that stereotypical thing. We were like, ‘Is there a song there? Can we write that? How do we do that?’ We were really obsessed with the challenge of conquering that idea in the right way. And we did it, it’s just so crazy and fun and different and cheeky and heavy and choppy. It checked all my boxes, and I’m really proud of it, so I’m glad that we wrangled that one.

Which one of these songs are you most excited to play with a full band? I’m sure you’re missing playing live.

“Not On My Watch.” It’s got this certain energy to it. There’s two words that come to mind when I think of this EP: it’s inspirational and it’s helpful. It’s like the dis-track to the devil on your shoulder, that’s what I keep calling it. I also don’t play guitar live when I sing that song, so it’s fun to just get around with no guitar, to walk around and just have that swag that song carries. That one’s just going to be a moment live, and I’m really excited for it.