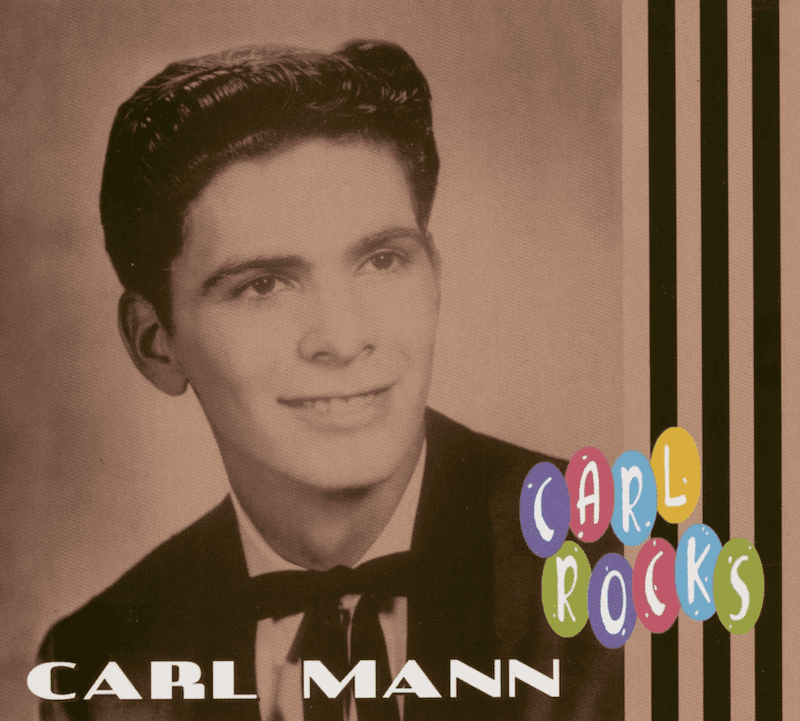 He burst on the recording scene in 1959 with his galloping rockabilly reworking of the 1950 Nat King Cole pop hit “Mona Lisa.” He followed it with similar uptempo treatments of Cole’s ballads “Pretend” and “Too Young,” as well as Gene Autry’s 1939 tune “South of the Border.”

Mann was one of the last artists that Sam Phillips introduced to the world from his Sun Records empire in Memphis. Carl Mann came along in the wake of such Sun legends as Elvis Presley, Johnny Cash, Jerry Lee Lewis, Carl Perkins, Roy Orbison and Charlie Rich as Phillips’ protégées.

Like Rich, he recorded for Philips International Records, a Sun subsidiary. Former Sun signee Conway Twitty copied Carl Mann’s version of “Mona Lisa” and also scored a 1959 hit with it (for MGM Records).

Carl Mann was a native of Huntingdon, Tennessee and was a prodigy appearing on the radio on nearby WDXI in Jackson, Tennessee at age 10. Inspired by the sounds of Nashville’s Grand Ole Opry, the singer, guitarist and pianist had his own band at age 12 and first recorded at age 14.

His 1957 single for Jaxon Records was the teen-themed “Gonna Rock and Roll Tonight.” At age 17, he wrangled an audition with Sun’s Jack Clement, which led to the recording of “Mona Lisa.” Much of his subsequent youthful output was in a similar vein. Mann rocked-up “Some Enchanted Evening,” “The Wayward Wind,” “Blueberry Hill,” “Mexicali Rose” and “Don’t Let the Stars Get in Your Eyes.”

Rockabilly fans also revere his versions of “Ubangi Stomp,” “Foolish One,” “Baby I Don’t Care,” “Kansas City,” “Rockin’ Love” and “I’m Coming Home.” He recorded his most influential tracks in both Memphis and in Sun’s Nashville studio supervised by Billy Sherrill, Scotty Moore and Kelso Herston.

He toured with Rich, Cash and Perkins, as well as with country stars George Jones and Loretta Lynn. But Mann’s career stalled when he was drafted into the Army in 1964.

Like most of the rockabilly stars, Mann returned to mainstream country music in the 1960s. He recorded for Monument Records and briefly charted in 1976 on ABC/Dot with a reworking of The Platters oldie “Twilight Time.” The following year, Sun issued an LP compiling his classics.

Mann left music to work in his father’s lumber business in Huntingdon, but was repeatedly lured back by offers to tour in Europe. He released an album in Holland in 1978 and another in Switzerland in 1985.

Germany’s Bear Family Records reissued his Sun sides in 2008 on a CD titled Carl Mann Rocks! Mann was an inductee into the Rockabilly Hall of Fame. In 2011 he was the subject of the book The Last Son of Sun. He issued a self-titled CD in 2012.

Plans for a memorial service are pending, according to the Memphis Commercial Appeal.