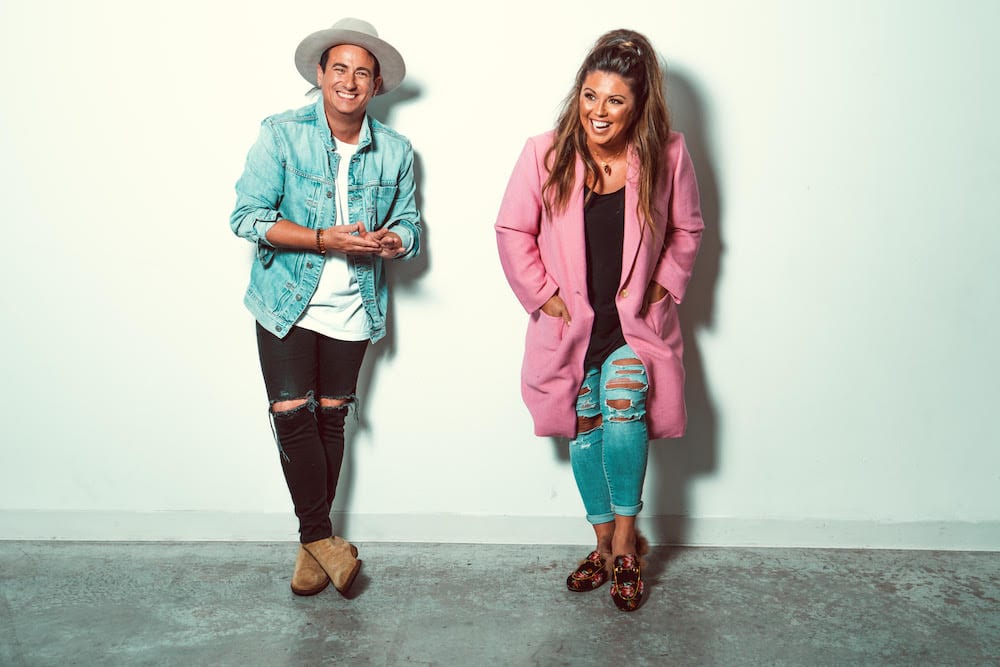 Multi-hyphenate Jesse Frasure has built his reputation on being a go-to writer and producer who can create chart-topping musical earworms in an array of genres. He’s earned 16 No. 1 hits as a songwriter and/or producer, including Kane Brown’s hit “One Thing Right,” featuring Marshmello, “Who I Wanna Be” and “Mr. Almost” for Meghan Trainor, Lauren Alaina’s breakthrough hit “Road Less Traveled,” and Kacey Musgraves’ “Wonder Woman.” Frasure was named BMI’s 2018 Country Songwriter of the Year, and has earned four consecutive CMA Triple Play Awards.

“Everything I do kind of complements everything else,” Frasure says. “I enjoy all of that and I didn’t want to be put in a box.”

That mantra also sums the work he and wife Stevie Frasure do in leading Roc Nation’s Rhythm House publishing unit, which they launched in 2016 in a joint venture with Warner Chappell.

Stevie, Vice President of Rhythm House Music in Nashville, oversees all aspects of daily operations. She launched her career at Warner Bros Records and Lyric Street Records, followed by roles at EMI Nashville Publishing, where she rose to Creative Director, before joining ole Songs Publishing as Creative Director in 2009.

Rhythm House’s roster includes Frasure’s own writing and production, as well as the signing and development of others including Cary Barlowe, Brandon Day, Steven Lee Olson and Alysa Vanderheym, who are finding success in multiple genres. Vanderheym co-wrote the current Kygo and One Republic single “Lose Somebody,” and is known for her work on Florida Georgia Line’s Platinum-certified “Talk You Out Of It,” among other tracks. Olson is known for hits including Keith Urban’s “Blue Ain’t Your Color” and Kip Moore’s “More Girls Like You.” North Carolina native Day has production and writing credits for The Plain White T’s and Big & Rich. Barlowe has penned hits for TobyMac, Lady A, Rascal Flatts, and more.

Jesse had previously worked at Major Bob Music Publishing for 15 years, rising to VP of A&R. working as both a publisher and songwriter. Warner Chappell’s Ben Vaughn reached out to him.

“I had reached the top of where I was going to get there, but I didn’t want to jump into another position at a corporate publishing company where I would have a ton of roles. My whole career has always been wearing a lot of hats. Every time people said, ‘Pick one lane,’ I kind of ignored that,” he says.

MusicRow spoke to Jesse and Stevie Frasure about launching Rhythm House, the company’s multi-genre successes, and the state of Nashville songwriting.

MusicRow: What attracted you to the idea of launching Rhythm House?

Stevie: We knew who Roc Nation was just because we love all music genres and Jesse was obsessed with Jay-Z.

Jesse: They felt like we could be a liaison between them and Nashville so we started about five years ago. We’ve kind of been the little engine that could. We keep things small. My wife and I came up through publishing so our belief is a boutique publisher should give you more support you have more attention. We do believe very much in outside cuts. Fortunately, we’ve been able to keep singles on the charts.

MusicRow: Stevie, how did you become involved in Rhythm House?

“I have been in publishing for about 15 years. We were not going to work together, we were very much NOT going to do that,” Stevie recalls. “I was with Pat Higdon and Patrick Joseph Music, and we were downsizing. I love Pat and he was paying me out of his pocket and I thought, ‘I could pitch some back catalog of Jesse’s, and Cary Barlowe who we signed to Rhythm House as our first writer, Jesse had worked with him before. As we got Cary, I just thought, ‘Well I’ll pitch Cary’s songs, too.’ I just became like ‘I guess I work here now.’ After a few years of working with Rhythm House and deciding who we would sign next, I was like, ‘I guess I should get a Rhythm House email.’

MusicRow: Early on, Jesse became known for remixing releases and working in the EDM world. Now, it’s become much more common for country songwriters and artists to do those types of collaborations and remixes in the past few years.

Stevie: I remember in our apartment off Eighth Avenue we had a spare bedroom and any time we were not working or hanging out with songwriters, he would be sitting there at a small rig making remixes. It was the beginning of country music going remix for dance clubs and I remember Universal would say, ‘Hey can you remix this Kip Moore song?’ or things like that. He would put out indie remixes that would get picked up and he was DJing. It was hard at first because it was the good ole boys way of thinking, like, ‘If you ain’t country, you ain’t worth a damn in town.’ Luckily when he was at Major Bob, Shane Stevens would be like, ‘I would love to top line this,’ and it would be like a German cut. Cary would be like ‘I think TobyMac would love this.’ That became the first, ‘Oh, it’s Christian music but it’s pop music.’ And he would make quick loops and demos. The songwriters loved it and it turned into a Hot Celle Rae cut, and “Sun Daze” for FGL. For FGL to take him on the road as a DJ and then write with him, it was the beginning of seeing country music say, ‘Oh, we have a Nelly collab. Jesse was really ahead of the game in that way.

MusicRow: One of the more recent hits was Kane Brown’s “One Thing Right,” featuring Marshmello. How did that come about?

“That song came from a writing retreat with Kane and it was a little too progressive for his album at the time. So these toplines instead of sitting there and you’ve got an artist who is open to collaborations, and it makes a lot of sense where we go, ‘If this doesn’t make your record, can we send it around?’ But it’s given us a whole other world and route for pitching. Outside of just pop artists, there is this whole world of DJs. The powerful thing about the EDM world is they get playlisted globally. Shane McAnally co-wrote “Are You With Me,” which became a Lost Frequencies EDM hit. The song’s probably one of the bigger earners in his catalog.

And Kane, he’s probably one of the smartest collaborators in our genre. It’s a pop mentality. For so long in Nashville, we were so worried about, ‘Oh, you’re over-collaborated’ or ‘If you put this out right now, it will take attention away from your radio single.’ But I think consumers listen to any music just like they do a Drake song. Drake may drop a single tomorrow that’s not on his album, and fans will listen.

MusicRow: What is the process like for vetting songwriters when you are looking to add to the Rhythm House roster?

Jesse: If 10% of what we write gets cut, we’re successful. So that means, we are getting told ‘No’ a lot. If you write 200+ songs last year, and in any given year, winning Writer of the Year is probably six-eight singles, tops. So that average ratio is scary and crazy. If you are being told ‘No’ more than ‘Yes,’ you have to really go to bat for someone. Sometimes you can have a prolific songwriter, but personality-wise, it just doesn’t fit. We’ve curated a roster that really complements each other.

MusicRow: How are you seeing the success of TikTok affect music publishing?

I’m not skeptical of TikTok and I love the idea. To me, it’s getting more attention for artists who already have a foundation. I’m not sure that I’ve seen, other than a Lil Nas X moment, something where it’s launched careers just yet. I think it’s very possible that it will, but we have to be careful because we too easily chase something. Everyone’s going to sign a Luke Combs or look to TikTok. It becomes something where people are following numbers only. Are they going to go to this person they found on TikTok and go through their whole catalog, or is it just because it was a TikTok challenge?

Stevie: If TikTok can bring forward amazing singers or talented, then I think it can translate, but I think for publishers, we are not going to go sign someone because they had a big TikTok hit. It might draw our attention, but I think TikTok is being taken into consideration for artists who are already having a moment with a certain song to make it even bigger.

How is TikTok affecting publishing catalogs?

There’s an artist named BØRNS who had “Electric Love” that hit on TikTok and a five-year-old album was brought back to life. Fleetwood Mac, the fact that they are discovering catalog songs more than they were from Spotify or iTunes, which makes me excited. Fleetwood Mac has the No. 1 song because of a guy skateboarding with an Ocean Spray bottle. That’s when I started to go, ‘Wow, if this can be a catalog discovery thing,’ Then those [piles of songs that have seen their glory days can find new life.

MusicRow: You recently launched the “Little Bit Country” radio show on Apple Music, where you get a chance to look deeply at how hit songs are crafted.

It takes people behind the scenes and shows them that the matrix of this industry us way more interconnected between genres. Sean Douglas wrote from Thomas Rhett on “Die A Happy Man,” and Dan+Shay’s “I Should Probably Go To Bed, but also for Lizzo (“Cuz I Love You”) and Demi Lovato. Even a song like “God’s Country,” we’ll deconstruct that and go, ‘Man, it reminds me of if Imagine Dragons met Bon Jovi’s “Dead or Alive,” meets Charlie Daniels Band’s kind of southern gothic story. It’s showing the audience that the way they listen to music is kind of the way we write music. Steph Jones who wrote [Kelsea Ballerini’s] “Hole in the Bottle” with me, is also on the Blackpink song (“Love to Hate Me”). We don’t look at music genres.

MusicRow: Stevie, you began working on a Nashville-based show focusing on women in the music industry, alongside Mickey Guyton, Caroline Bryan, Caroline Hobby and several others. How is that project going?

Stevie: It is still in the works. It’s evolved into the wives of some country artists talking about their lives and balancing everything. But Mickey Guyton is involved and how do we navigate being a woman in country music. Some are artists, some are moms. Caroline Hobby is amazing and she had started interviewing wives of country artists and it evolved from there. We have a production team and are still developing it. We will see where it goes. It will likely be a docu-series about being a wife and publisher and show a little bit of how they manage everything. Some of these women manage the whole behind-the-scenes career of their husbands.

MusicRow: The pandemic has obviously impacted touring, but what are you seeing ahead for writer and publishers for 2021?

Jesse: There are so many records being worked on right now, Obviously Thomas Rhett just announced he’s coming out with one. We have a cool thing we are working on for Kelsea. There will be so many albums dropping in the first quarter of 2021, it’s crazy. The amount of songs we’ve been pitching, all the writing we’ve been doing this year, it’s been almost more than ever.”