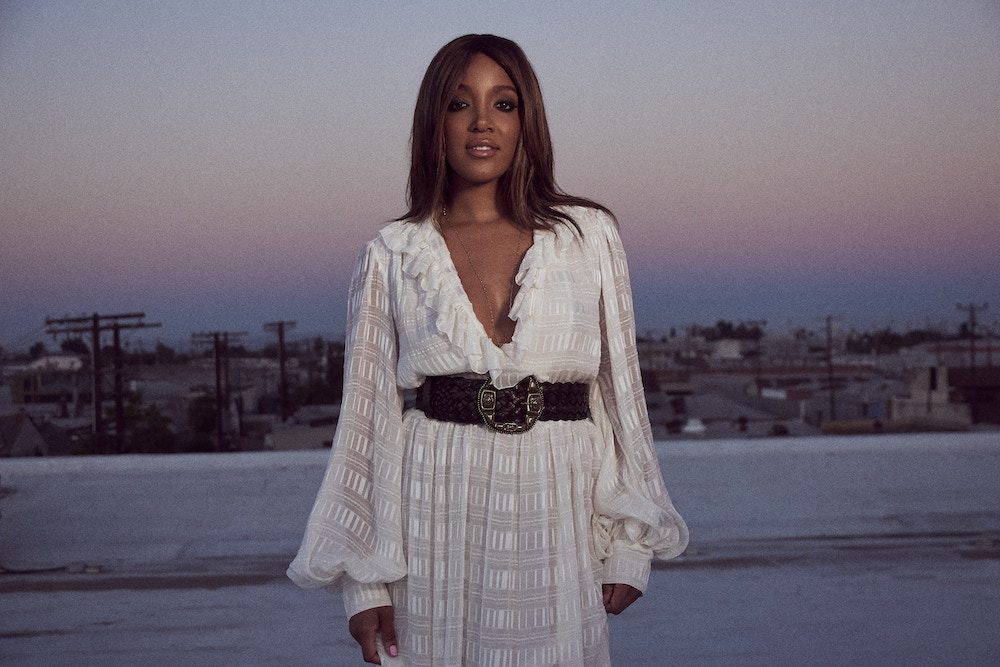 As part of tonight’s ACM Awards, Mickey Guyton will perform “What Are You Gonna Tell Her?”—the achingly raw ballad inspired by gender inequalities she and her contemporaries have experienced—reprising a powerful moment from just seven months ago, when the astute vocalist and songwriter earned a standing ovation from a room filled with country radio programmers at the annual UMG Nashville luncheon during Country Radio Seminar.

Though the CRS performance marked Guyton’s first at the label’s radio luncheon since 2015, she was thinking about anyone but herself as she stepped onstage at the Ryman Auditorium and let the soft verses filled with images of childhood promises swell into a soaring chorus of devastation and reckoning.

“I knew this was going to be an important moment, because I hadn’t been there in so long, but also because I’m singing a very polarizing song in front of a room full of men. Men that were going to either be pissed off about this message or going to feel touched by this message. It’s a message that we’ve got to fix this for our future daughters. Screw me, there’s a seven-year-old little girl that wants to sing country music—or any kind of music—and we need to protect her. I walked out there and just tried to have an honest conversation, and I was not expecting that response.”

Only two weeks earlier, she had written the song alongside Emma Lee, Victoria Banks, and Karen Kosowski, after attending a Grammy afterparty in Los Angeles.

“There were all these beautiful women in the room. I wondered what they went through and what they continue to go through, even at the top of their career? I can’t imagine it’s easy. I’m sure they’re discounted just the same. I was in such a hard place because I was seeing so many women that are in front of the cameras, but also behind the scenes—seeing the battles that so many are having to face on a daily basis to have their careers, and to be seen and to be heard.”

Guyton knew her co-writers could relate.

“These women are extremely talented, and they get glossed over and discounted just like me. They can’t get in writing rooms with men. Karen is an incredible producer and people will say, ‘Oh, can she really produce?’ And I’m like, ‘So if her name was Charles would you trust her more?’ I’ve seen Victoria come into a writing session crying after leaving a different session full of guys that were like, ‘None of her ideas are good enough.’”

The song was the first of two emotionally charged songs she released this year—personal, powerful songs that challenged both gender and racial discrimination.

In June, she followed with “Black Like Me.” Guyton had been holding onto the title—inspired by the John Howard Griffin book by the same title—and wrote the song prior to the deaths of George Floyd, Breonna Taylor and Ahmaud Arbery that kindled protests against racism and police brutality.

Guyton posted the song on social media, with no formal promotional plan for the track. Then, Spotify executives reached out to Guyton after hearing “Black Like Me,” and it was released on Blackout Tuesday, a day focused on spreading awareness of racial inequality.

“A lot of what’s happening in this world is misunderstanding,” she says. “If we all just stepped inside somebody else’s shoes for a second we would probably have a completely different view of things. When writing this song, I really started going back in my past, looking at everything that I’ve lived through.”

Both songs are found on the six-song EP Bridges, Guyton’s first release in five years, which dropped on Sept. 11. While so many country artists have spent the past decade serving up lyrics about alcohol, trucks, and girls in cutoffs, Mickey Guyton serves up six rounds of bold, elegant, emotionally nuanced music on the new EP—with more strength, fervor, wisdom, vocal and political prowess—and yes, playfulness—than many full-fledged albums.

She dives deep into her own experiences, hopes, and grave disappointments as a Black female artist signed to a country label, in a musical genre that is—despite the Black artists, musicians and songwriters that make up its very origins—primarily filled with white performers.

The Texas native’s childhood was filled with country music. Her grandmother would listen to Kenny Rogers and Dolly Parton, and had VHS tapes of Fried Green Tomatoes and Steel Magnolias, alongside the Roots miniseries.

“We had Wrangler Fridays at our pep rallies. I took a class in PE to learn the ten-step,” she recalls. She also found the boldness to pursue a career in country music after hearing a young fellow Texan by the name of LeAnn Rimes perform the national anthem during a Texas Rangers game.

Like so many dreamers before her, she moved to Nashville. In 2011, she signed with powerhouse label Capitol Music Nashville. Even so, it would be four years before her debut single and EP were released. Her debut single, “Better Than You Left Me,” a post-breakup ballad that swelled with optimism and powerful vocals, released in 2015 and reached No. 34 on the Billboard Country Airplay chart. Two follow-up singles in 2016 and 2017 failed to crack the Top 40 on the chart.

She would watch as male country artists incorporated more sounds and aesthetics from Black music and culture, while she found herself still having to prove her authenticity.

“It was really hard navigating that. It was really hard to see middle aged white men, singing to hip-hop and rap tracks, essentially, and rapping a little bit on their songs. I would have to watch that and think, ‘Why am I being overly scrutinized? Why am I being glossed over? And that’s not allowed because I’m Black and people are going to question my sincerity. But your sincerity isn’t being questioned.’ It was really, really difficult for me. I was angry. There were many sleepless nights. I was drinking a lot just to fall asleep at night.”

She often thought about walking away from her music career, but credits UMG Nashville President Cindy Mabe for being her champion.

“She said, ‘You can’t do that, Mickey. You are so needed in this industry.’ She is the one who has allowed me to just be myself as an artist, and understands what I’m trying to do in this industry.”

A turning point in her struggle came through a conversation with her husband, attorney Grant Savoy.

“I asked him, ‘Why do you really honestly think that country music isn’t working for me?’ And he said to me, ‘Because you’re running away from everything that makes you different.’ And I really, really was because I was trying to fit into what I thought country music wanted for me. But country music is three chords and the truth. He said, ‘You need to write your truth.’ He goes, ‘Because what is your truth? You’re a Black woman. You love country music. You grew up in the country. Write about that.'”
So she did.

The new EP doesn’t just challenge; it seeks solutions and peace. “Heaven Down Here” and the stirring, soulful title track speak to closing the divides that keep people apart.

“’Bridges’ really draws this project together,” she says. “Bridges connect land, they connect people. That’s where I was inspired for this song. I thought about Selma and people marching across that bridge. Bridges are such a symbolic thing.”
The album also has moments of playfulness, such as the “Rosé,” but even songs such as the warning shot “Salt” stem from a deeper place.

“We’re in an industry where there are beautiful women that work with producers that use their bodies and their beauty to get opportunities. That song’s just like, ‘Be careful, that is a real thing.'”

But it has been “What Are You Gonna Tell Her?” and “Black Like Me” that have demanded attention, consideration, and action from listeners.

In the months since she released “Black Like Me,” she has been among those at the forefront of the national conversations on racial inequality, speaking on panels that have focused on racial inequality within the music industry, speaking out in dozens of interviews. In recent weeks, artists such as Dolly Parton and Chris Stapleton have also spoken out, adding their voices to a growing chorus.

“It made me feel some relief because I was scared when all of this started. I know it’s not natural for country artists to make such bold statements. But to see someone like Chris Stapleton and Dolly Parton say, ‘Of course Black lives matter’ was beautiful, but it was also hurtful to see the backlash that a lot of them received.

“I don’t know what’s wrong with the word ‘Black’ that offends people so much, because I can easily say white lives matter. It’s not even difficult for it to roll off my tongue. I can say that. But some people cannot say Black lives matter and that is devastating.”

Guyton says she is happy to finally be releasing music that truly represents who is she as an artist. Even so, Guyton is still looking toward the day her own full-length country album will finally be released.

“I don’t know why it’s always been EP for me and albums for other people. I’m not sure. I’ve got to be honest, that was really frustrating. I have so many songs that are just as good that are coming out. So there will definitely be an album, in my opinion.
“But on this EP, I’ve said my truth, I’ve given my best, and I’m proud of it,” she says.