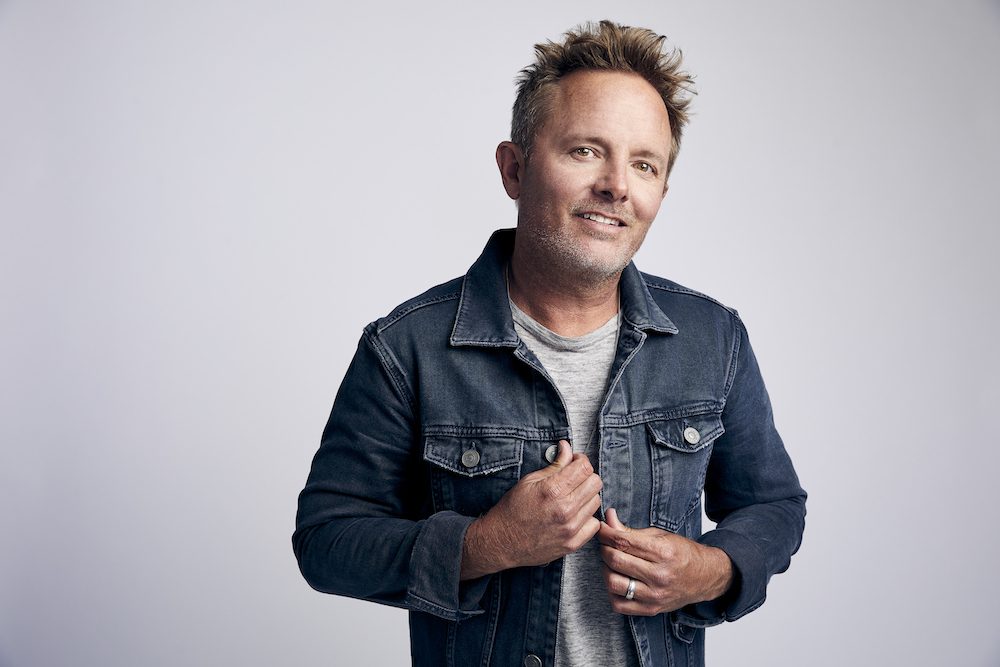 Grammy winner and multi-Platinum singer-songwriter Chris Tomlin has been one of Contemporary Christian Music’s top-selling artists for nearly two decades, since earning his first No. 1 “How Great Is Our God” in 2005. His songs have been sung by church congregations around the world, and along the way, Tomlin’s earned 16 No. 1 CCM hits, sold more than nine million albums, and earned a Grammy, 21 Dove Awards and two BMI Songwriter of the Year honors.

But when he was a child in Texas, Tomlin grew up with the influence of country legend Willie Nelson.

“All I ever wanted to do was be in country music as a kid,” Tomlin tells MusicRow. “My dad would play country and that’s what I thought it would be and then I started getting really involved with music through my church and found that God had given me a gift to write simple songs that people could sing and the rest is history.”

With Friday’s (July 31) release of his new album, Chris Tomlin & Friends, he bridges that gap in a way, welcoming an array of artists who have been influenced by his own music—and who also just happen to be some of country music’s best-selling artists, such as Florida Georgia Line, Brett Young, Lady A, and Thomas Rhett.

The album evolved from a couple of chance meetings—the first with Florida Georgia Line’s Tyler Hubbard during a Florida vacation.

“We met at the beach in the gym, randomly,” Hubbard recalls. “He came up and introduced himself and we kind of hit it off. That ended up turning into a full day of hanging out and riding bikes and talking about life and music and all that. I just kind of said, ‘Man, I’d love to get in a writing room with you. I’d love for [Hubbard’s Florida Georgia Line bandmate Brian Kelley] to join us and let us also introduce you to some of our people and just write some songs.”

“We were just seeing what would happen if we smashed up the genres, his world and my world kind of colliding,” Tomlin says. “Corey Crowder was the third piece—we all realized it came really easy and there was something inspiring every time we wrote together. After a few months of writing, we started joking around about making a full album together and at first I thought it would just be me and Florida Georgia Line together. Then we started thinking ‘What if we bring in others that have the same heart and want to do this with us?’”

The week before that Florida vacation, during his annual Good Friday concert at Nashville’s Bridgestone Arena, Tomlin had randomly met another country superstar, Thomas Rhett.

“Every year for the Good Friday show, I try to bring someone out as a surprise—it’s a very Nashville thing to do,” Tomlin says. “I had wanted to bring Thomas out last year. I didn’t know him at the time and I had tried every way to reach out to him. Then on the day of the concert, I’m at soundcheck and I walk backstage and standing back there is Thomas Rhett. So we just talked about loving each other’s music and he said, ‘We should work on some music together.’ So it was probably a few weeks after that that he sent me ‘Be A Light.’ This whole thing started right around those couple of weeks. So we started writing as well, and then Lady A. I knew Dave [Haywood] and Hillary [Scott] for the past several years, but that connection was perfect for this project.”

In less than 13 HOURS “Chris Tomlin & Friends” is here! Raise your hand if you’re staying up for it ✋🏼

Country music’s roots have long been intertwined with religious music, from Hank Williams’ signature “I Saw The Light” to religious leanings of the country music standard “Will The Circle Be Unbroken.” The list of country artists who have issued Gospel releases is lengthy, from Johnny Cash to Randy Travis, Reba, and Alan Jackson. In 2016, Lady A’s Hillary Scott earned two Grammys for her solo Gospel album Love Remains, and the single “Thy Will.” That same year, FGL earned another country hit with “H.O.L.Y.,” which borrowed a title and snippets of melodies that might come as a familiar refrain to churchgoers. Last year, Tomlin made a surprise performance during a few of FGL’s concerts, including a stop at Atlanta. He also joined Thomas Rhett, Hillary Scott, Reba and Keith Urban for “Be A Light,” which released earlier this year.

“Between us, we learned to trust each other really quick and trust each other’s ear,” Hubbard said. “Having that trust is really, really valuable when you’re working on a project like this that’s so diverse and dynamic and has so many different things going on.”

For many of the artists on the Chris Tomlin & Friends, taking part in the project allowed them to collaborate with someone whose music has influenced them.

“I’ve been such a huge fan of Chris Tomlin for so long! I grew up leading worship and that’s how I found music,” said Brett Young, who sang on “Be The Moon,” alongside Cassadee Pope. “To be asked to be a part of this project was such an honor and this song is so special and hits very close to home for me.”

“His music represents so much,” FGL’s Brian Kelley said. “A lot of our youth, our foundation in our spirituality and our faith, based around a lot of his music and a lot of that music growing up on it. Shane & Shane, Casting Crowns, I mean, there’s just so many different artists that we could go on for days. It was a natural move for us, but also inspiring to work with somebody that we’ve clearly looked up to and has been a huge inspiration. This has been truly inspiring because he’s put out a bunch of albums and been crushing it for a long time. To see him still hungry and see him bringing in ideas and continuing to elevate his craft … He’s still hungry. He’s still inspired. He’s still got a fire and fight inside of him for the Lord with that music and for connecting people with his music and the Lord.”

A true collaborative effort, many of the artists brought not just their voices, but their own songs. RaeLynn not only sang on, but co-wrote “Chase Me Down.” Tomlin co-wrote “Who You Are To Me” alongside Lady A’s Charles Kelley, Hillary Scott, and Dave Haywood, who also sing on the track.

“The way a lot of albums go down, let’s be honest, is I’ve got the songs, I’ve got some famous friends, and ‘Will you come sing the second verse?’ That’s just not this. This is a true effort together. On ‘Forever Home,’ with FGL, I sing on the very end on it, barely. It’s them. On ‘Chase Me Down’ with RaeLynn, they brought it to me. I was floored. I just want the best songs—I don’t have to write the songs. And with RaeLynn, her cousin is Leeland and I’ve done so much with Leeland so all these dots just kept connecting in a cool way.”

Another FGL contribution, “Thank You Lord,” was written a few years ago, alongside Thomas Rhett.

“We were kind of waiting for an opportunity for it to live it’s best life. We felt like, ‘Oh, this project,'” Hubbard says. “The whole recorded process was incredible. They brought in a choir in the ocean waves. I actually wasn’t there that day, but apparently, it was just an incredibly spiritual moment. The choir just kind of went in there and was sort of free-styling and doing their thing, and just catching so many awesome moments.”

Another album track, “Sing,” features Russell Dickerson. Before he signed a deal with Triple Tigers and earned three No.1 hits, Dickerson served as Tomlin’s guitar tech for three years.

“He was in the bunk under me on the bus for three years of my touring life, before he was an artist. I instantly thought of Russell for this,” Tomlin says. Even then, Dickerson’s passion for music and worship was apparent—even if it didn’t make him the best guitar tech.

“He was the greatest hang, the most fun guy and at the time he just wanted to be in the music world. He had a love for God and a love for worship. We joked that he was the coolest guy and the worst guitar tech. He would be on the side of the stage, hands raised, just worshiping. One festival we were on stage and it was so hot that our guitarist, smoke was literally coming out the back of his guitar. It overheated and all our sound is going down, the guitars are not working. We are in front of thousands of people and we look over to Russell for help and he’s just over there, singing to God and he has no clue that we were falling apart onstage. It was hilarious.”

The album also includes collaborations with We The Kingdom and NEEDTOBREATHE’s Bear Rinehart. However, one of the album’s strongest moments is its uplifting denouement “Tin Roof,” featuring former The Voice contestant Blessing Offor, a gifted, Nigerian-born singer-songwriter. The song was penned by Offor and country hitmaker Natalie Hemby.

“You have all these superstars and then the last song on the album, you have this guy that most people have probably never heard of, and it may be the strongest song on the record, honestly. I wanted it to be on this album because he has been here and working hard, and I want people to hear his music. He has so many good songs and is an incredible singer-songwriter.”

“That song is amazing, and that’s just a God thing that this song came in at the time it did, very late in the process,” Kelley says. “It was a no brainer, and, I mean, just powerful. Makes you want to put your hands in the air and just kind of stop, and just breathe for a second. Be thankful, and … it’s just gorgeous. His voice is gorgeous, everything about that.”

Even with a track list filled with collaborators, there is still at least one country artist Tomlin would love to work with.

“Garth would be a dream. If that happened, I would retire—I would be done. There are a lot of guys I love. I love that this was done with so many current superstars of the genre and that’s a privilege. But some of the ones I love like Tim McGraw or Garth would be fun. Eric Church would be on that list, too. That would be fun, who knows?”